Scientists at University of Washington have built 3 atom thin LED made from atom-scale sheets of the molecular semiconductor material tungsten diselenide, a thinnest-known compound semiconductor material. Researchers use adhesive tape to extract a single sheet of this material from thick, layered pieces, a method similar to isolating one-atom-thick flakes graphene from graphite. 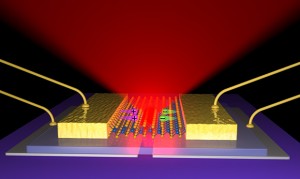 The above picture is the graphical representation of how layers of the 2-D LED emitting light.

“We are able to make the thinnest-possible LEDs, only three atoms thick yet mechanically strong. Such thin and foldable LEDs are critical for future portable and integrated electronic devices,” said Xiaodong Xu, a UW assistant professor in materials science and engineering and in physics.

“These are 10,000 times smaller than the thickness of a human hair, yet the light they emit can be seen by standard measurement equipment,” Ross said. “This is a huge leap of miniaturization of technology, and because it’s a semiconductor, you can do almost everything with it that is possible with existing, three-dimensional silicon technologies,” Ross said.

These LEDs can also be used as light-source in light based interchip communication in nano-scale computer chips.

“A promising solution is to replace the electrical interconnect with optical ones, which will maintain the high bandwidth but consume less energy,” Xu said. “Our work makes it possible to make highly integrated and energy-efficient devices in areas such as lighting, optical communication and nano lasers.”

Co-authors are Aaron Jones and David Cobden of the UW; Philip Klement of Justus Liebig University in Germany; Nirmal Ghimire, Jiaqiang Yan and D.G. Mandrus of the University of Tennessee and Oak Ridge National Laboratory; Takashi Taniguchi, Kenji Watanabe and Kenji Kitamura of the National Institute for Materials Science in Japan; and Wang Yao of the University of Hong Kong.

Automotive
Extremely narrow beam capable LiDAR for use in autonomous...

Opto
Kyocera introduces 6.2" LCD display for Industrial and Me...

Communication
1310nm CW laser and laser arrays from NeoPhotonics are no...

Interconnect
Hybrid fibre-optic PoE cable can extend up to 2KMs

Opto
Transformerless LED lamps with light emission up to 50 lu...

Opto
Osram expands the Duris LED family for linear and area in...