"Weak semiconductor market conditions, which continued into the first quarter of 2013, generated downward pressure on new equipment purchases," said Bob Johnson, research vice president at Gartner. "However, semiconductor equipment quarterly revenues are beginning to improve and positive movement in the book-to-bill ratio indicates that spending for equipment will pick up later in the year. Looking beyond 2013, we expect that the current economic malaise will have worked its way through the industry and spending will follow a generally increasing pattern in all sectors throughout the rest of the forecast period." 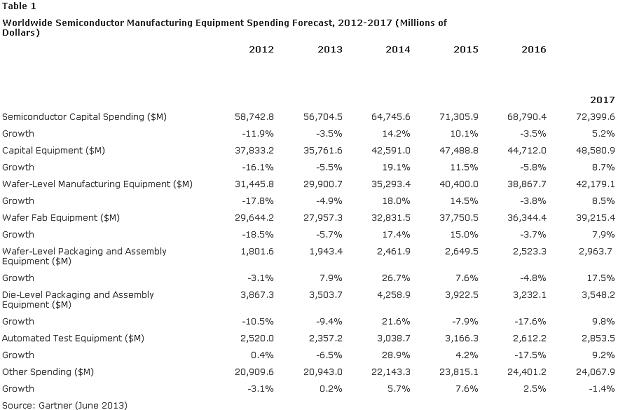 The other market findings and analysis disclosed by Gartner:
1. Although capital spending for all products will decline in 2013, logic spending will be the strongest segment, declining only 2 percent compared with a 3.5 percent decline for the total market. This is driven by aggressive investment of the few top players, which are ramping up production at the sub-30-nanometer (nm) nodes. Memory will continue to be weak through 2013, with maintenance-level investments for DRAM and a slightly down NAND market until supply and demand balance returns. For 2014, Gartner sees capital expenditure (capex) returning to growth with an increase of 14.2 percent over 2013. The foundry segment will see an increase in spending of about 14.3 percent this year, while both integrated device manufacturers (IDMs), and semiconductor assembly and test services (SATS) providers will show spending declines. Beyond 2013, memory surges in 2014 and 2015 and a cyclical decline in 2016, while logic returns to a steady growth pattern.

2. The wafer fab equipment (WFE) market is seeing continuous quarter-over-quarter growth in 2013, as major manufacturers come out of a period of high inventories and a generally weak semiconductor market. Early in the year the book-to-bill ratio passed 1:1 for the first time in months, signaling that the need for new equipment is strengthening as demand for leading-edge devices is improving. Looking beyond 2013, Gartner sees growth returning to the WFE market with double-digit growth in 2014 and 2015, before a modest cyclical downturn in 2016.

To give you further inputs on this industry, SEMI has reported the North American semiconductor equipment Industry's three-month average of worldwide bookings in May 2013 was $1.32 billion. The bookings figure is 12.5 percent higher than the final April 2013 level of $1.17 billion, and is 18.1 percent lower than the May 2012 order level of $1.61 billion.

“The SEMI Book-to-Bill continues to show steady improvement as the ratio remains at or above parity for the fifth consecutive month,” said Daniel P. Tracy, senior director of Industry Research and Statistics at SEMI. “The spending outlook for the year is improving as foundries continue to invest in advanced technologies and NAND manufacturers plan to increase spending on equipment.”