NPD Solarbuzz says Confidence in the solar PV industry was severely damaged in 2012, as module average selling prices (ASPs) declined approximately 50% Y/Y, while end-market demand grew only 5%. This mismatch placed extreme pressure on the solar PV manufacturing sector, which had expanded its capacity during 2010 and 2011 to potentially supply 45 GW to an end-market that reached only 29 GW in 2012.

“Manufacturing over-capacity and declining revenues had a dramatic impact on the PV industry in 2012, and this trend will continue during 2013,” said Michael Barker, Senior Analyst at NPD Solarbuzz. “Share values of several publicly listed PV companies have been falling close to delisting levels, operating losses have been reported in the hundreds of millions of dollars per quarter, and many manufacturers are continuing to file for insolvency. Predicting how and when the solar PV industry will rebound to profitability has now become essential for all industry participants.” 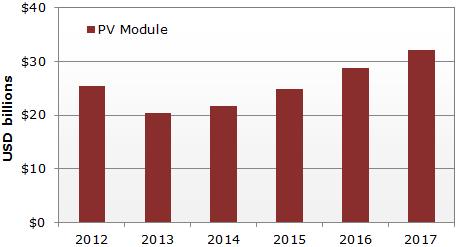 NPD Solarbuzz predicts further consolidation in the solar PV manufacturing sector through 2014, providing opportunities for market share gains. Module ASPs will continue to decline at a slower rate than in the last two years, which will provide an opportunity for leading module suppliers to implement cost reduction steps and create a profitable environment when the end-market demand approaches 46 GW in 2015.

“Surviving the downturn phase of 2013 and 2014 remains the key objective for all solar PV manufacturers,” Barker noted. “Module suppliers with profitable business models will emerge as market leaders. In 2015, they can expect an industry that offers strong growth and revenue potential, which should restore confidence in the PV manufacturing sector and lead to further investments in new capacity and next-generation technologies.”