Introduction: Because of the increasing concern for the environmental issues, the design of power supplies for high efficiency and low standby power consumption keeps gaining attention in these years. Soft-switching or resonant conversion topologies are utilized in recent years to meet high efficiency challenge. However, future challenge for low power consumption, low cost, easy design and manufacturing poses a huge challenge to current resonant topologies. The purpose of this article is to illustrate the operation theory and benefit of a new proposed topology: two-switch quasi-resonant (QR) flyback converter and demonstrate a 90W power design which fulfills the requirement of high-efficiency (> 90%) and slim form factor ( 60mm x 95 mm x 16.5mm) while meeting 2013 ErP power saving request ( <0.5W under 0.25W load).

Given the benefit provided by dual switch flyback, it could be a potential solution to meet the future demand of notebook AC/DC adaptors, LED TV power supply, LED lighting drivers, all in one PC powers and high power charger and any such SMPS power supply designs.

A. Advantages and features of Dual-Switch Flyback topology

2. Light load and no load efficiency:

3. Power switching voltage be clamped to VIN and could use < 500V MOSFET.

6. Easy to design and manufacture.

The operation theory and solution benefit are explained in below paragraphs. In PFC stage, it uses a CRM PFC to boost output into PWM stage. In a power ranges less than 200 watt, a CRM PFC is preferred due to its merit of zero current switching and zero diode reverse recovery loss. Also, the FAN6920 has a feature of two PFC output levels which allow a lower PFC output during low AC input to improve low line efficiency.

In PWM stage, there are two power switches to control energy delivery timing, their turn-on/off timing are in same sequence, the control signals are sent from PFC/PWM combo controller [1] [2]. Combining with two recycling diodes that can clamp the maximum voltage rating of PWM switches, It also recycles the leakage inductance energy to gain more system efficiency. By doing so, primary snubber can be removed to simplify circuit and save system cost. Furthermore, this stage operates in quasi-resonant mode; it also could keep PWM switches turning-on with minimum level of drain-source voltage, which could save lots of switching losses in PWM stage. Moreover, this topology could allow wide input voltage (PFC output voltage) range, therefore, by adjusting PFC output voltage that could benefit PFC stage efficiency improving.

In rectification stage, there is one rectifier diode is used to conduct and rectify output current, and then generate a DC output voltage to load. However, forward-voltage drop of rectifier diode is generated while the rectifier diode is forced to turn on, because this voltage drop generates rectification loss and causes overall efficiency suffered severely. To further reduce and improve this loss and caused thermal issue, using a low turn-on-resistance (RDS-ON) MOSFET to be an active device - Synchronous Rectifier (SR) for rectifying is preferred to be chosen. The SR MOSFET could be driven and controlled through a SR controller (e.g. FAN6204 [3]). 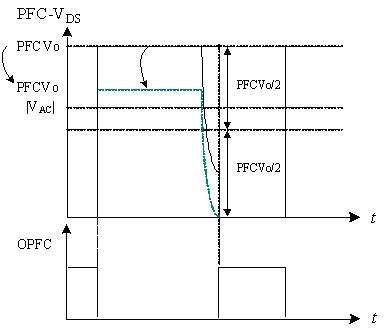 The behavior waveform when inductor current discharges to zero can also be seen in Figure 2, when drain voltage of PFC switch starts to resonate and decrease, and then when it reaches minimum level, PFC switch could be turned on by PFC controller then starts a new switching cycle again. If PFC output voltage is set to lower and input voltage is also at low level. If it can satisfy the following equation (1), the PFC switch could be turned on with much lower drain voltage or achieving ZVS. That could much better for PFC stage efficiency improving. 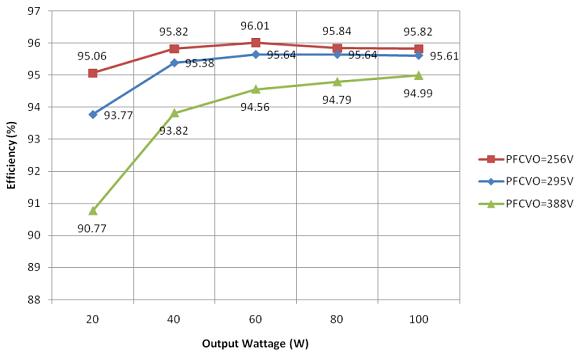 In PWM stage, dual-switch Flyback converter is proposed in this article to act as main DC/DC converter to generate and regulate DC output voltage in adaptor. Figure 4A and 4B show this converter simplified circuit and its detail key waveforms. By using a Quasi-Resonant controller (e.g. FAN6920 [1]), PWM switches could turn on with minimum voltage level because the switches drain-source voltages resonate and decrease when PWM transformer current discharges to zero and then drain-source capacitances of PWM switches resonate with transformer inductor. The controller detects the voltage reach valley, and then turns on PWM switches. During PWM switches turn off, the drain-source voltages are reflected from secondary winding plus input voltage, and these voltage can be expressed as following: 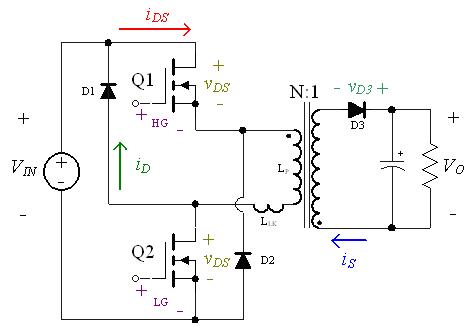 Figure 4A (above): Dual-switch Flyback 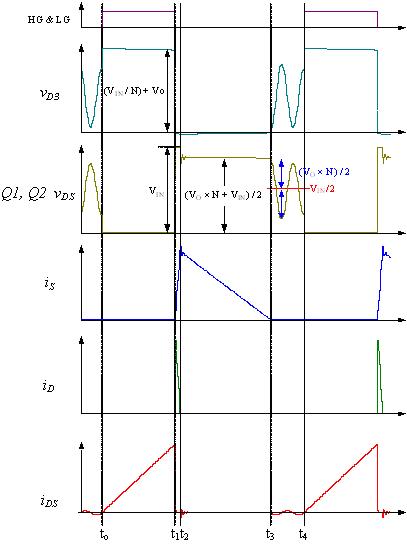 Figure 4B (above): Key waveforms of Dual-switch Flyback

Referring to Figure 4C, at the beginning of turn-off period, leakage inductance of transformer produces voltage spike on PWM switches, and causes drain voltages increase to VIN voltage and then clamped to this level. And therefore, the leakage inductance energy which was stored during PWM switches turning on could be released by two paths. One is releasing to PWM drain-source capacitances to charge and increase drain voltage to VIN from the voltage (Refer to equation 2). And releasing and recycling to VIN through two recycling diodes D1 and D2. So that the transformer turn-ratio and VIN voltage level (PFC output voltage) would influence recycling period and percentage. 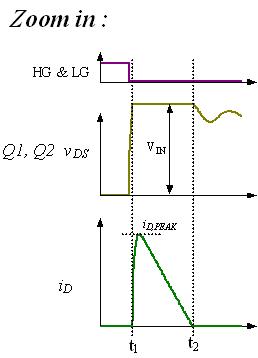 TURN RATIO CONSIDERATION OF PWM TRANSFORMER
To compare different turn-ratio and look how it would have influenced PWM stage. The following measured waveforms Figure 5 (A) and (B) show drain-source voltage of low-side PWM switch during different turn-ratio (N=11 and 12).

There are several different system behaviors between Figure 5 (A) and (B). Setting higher turn-ratio it would obtain more depth valley switching, and it also could benefit on decreasing switching losses of PWM switches. Another point is recycling period would become longer with higher turn-ratio setting. It can be obviously seen its differences in measured waveforms. Higher turn-ratio setting, it could also recycle more leakage inductance energy rather than wasting energy on charging drain-source capacitances of PWM switches. Figure 5 (C) shows recycled currents which flow through diodes D1 and D2 during different turn-ration setting. 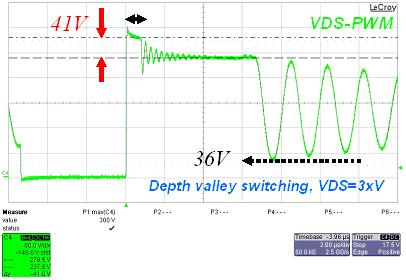 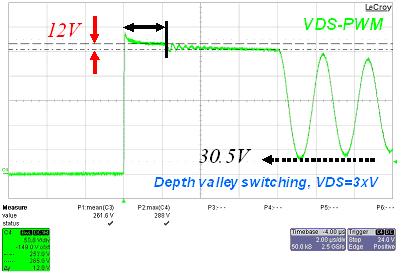 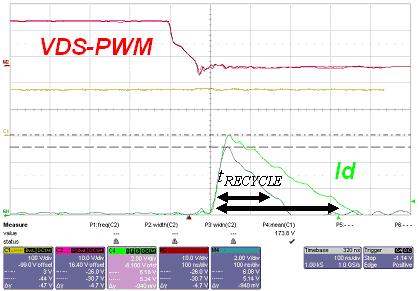 Another point of view, on secondary RMS current will become higher after increasing turn-ratio. Based on various applications, It should to be considered and be optimized between PWM switching loss and rectification loss on secondary.

There is one limitation on using this PWM topology due to recycling diodes. During PWM switches turn off period, the voltage on primary winding is clamped to VIN. If the voltage of secondary winding is low than output voltage target (VIN/N < VO), the output voltage will drop and be clamped to VIN/N, and the most energy stored in transformer would be release to VIN during turn-off period. That could cause output voltage out of control until VIN voltage is charged to higher than N×VO. So that VLP voltage should be designed smaller than the VIN voltage (Not including voltage spike) during PWM switches turning-off period.

PWM STAGE GREEN MODE OPERAION
ENERGY STAR EPS (External Power Supply) version 2.0 has been announced and gone into effect on Nov 2008; Table 1 shows its detail criterion for different rated wattage. In order to meet this requirement, green mode operation has been developed and used in many years ago. Especially in Flyback converter, it was a popular topology and has been widely chosen and designed for consumer power supply and less than 100W power supplies. For Flyback converter, green mode operation could effective reduce controller operating current, system power consumption and improving the light load efficiency. However, dual-switch Flyback converter can also base on these green techniques to gain all benefits in system 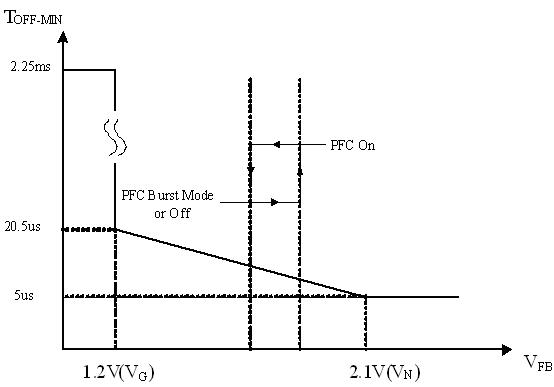 To compare the Schottky diode (FYP2006DN) [4] with the MOSFET (FDP5800) [5], under same conducted current level, around 0.6V difference forward voltage drop can be calculated and obtained (Refer to Figure 7 and 8). Worse yet, because forward voltage drop is depending on its conducting current, However, because rectifier diodes are passive component, it's very easy to implement on power system whereas SR needs to be triggered by additional timing driven circuit. 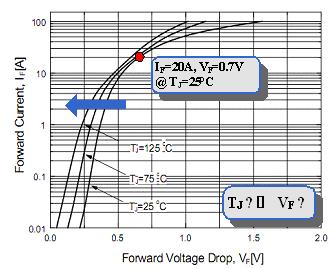 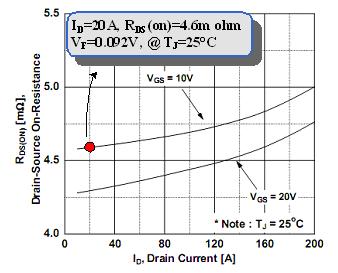 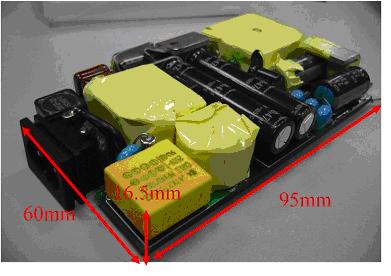 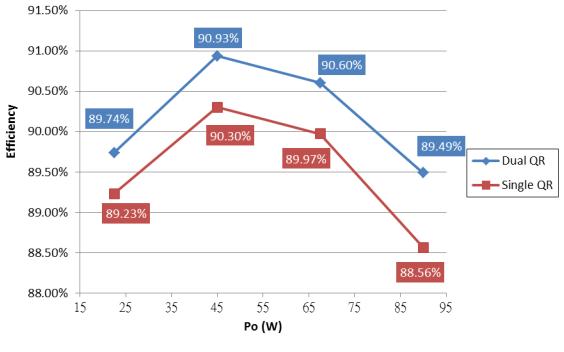 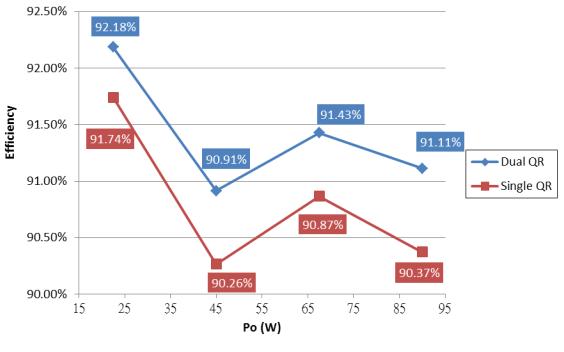 Student
The basic elements of digital circuits: MOSFET, gate and ...

Test-measurement
Mobile Application Trends and the Impact on Mobile Platforms

Discrete
Design of audio amplifiers: selection guide for Class-D a...

Dcdcconverter
Why engineers going for FPGA rather than ASIC?

Sensors
Brief introduction to the restriction of harmful material...

Iot
Virtual Instrumentation - Changing the Face of Design, Me...

Automotive
Learn FPGA design to develop your own customized embeddd ...

Batteries
The next generation of NonVolatile RAMs (NVRAM)

Opto
Embedded Systems Course- module 17: Basics of LCD and it...