In this decade there is huge demand for low power VLSI semiconductor chips. In order to achive low power, power consumption should be minimized at CMOS MOSFET level. In this article, various techniques which are available for minimizing the power consumption at different abstraction levels are discussed in detail. With the help of this article, VLSI design engineers can  pick the right methodology with suitable process techniques to reach their required goal.

Keeping in mind all those performance affecting parameters, VLSI designers produced various design mythologies. There are various techniques to achieve low power design. All this techniques are discussed in detail in this article.

The total power consumption of CMOS VLSI device can be expressed using equation 1.

Dynamic power consumption is due to charging and discharging of parasitic capacitance.

Where VDD is power supply, N is the Switching activity; f is the frequency of the signal

Where K is process technology parameter

N: average number of transistors in the output stage

Static power consumption is due to the leakage current in the MOSFET device.

I5 :Channel punch through current

There is variety of techniques available to reduce the power consumption of the circuit at different abstraction levels those are mentioned below.

I. At circuit level

There are different VLSI circuits families that exist at this level of abstraction. Those are 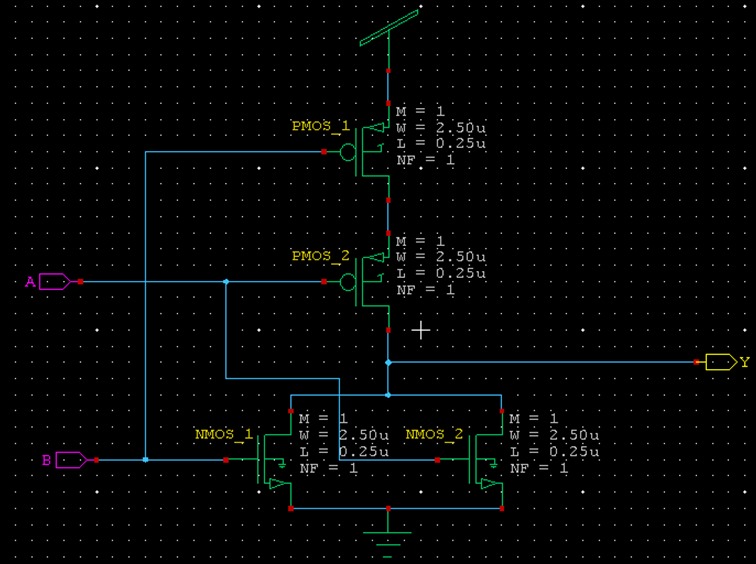 In this logic, power consumption can be reduced by using: 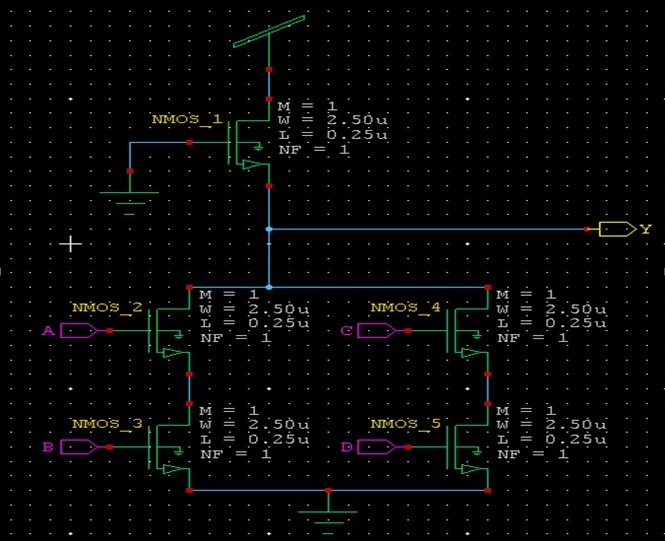 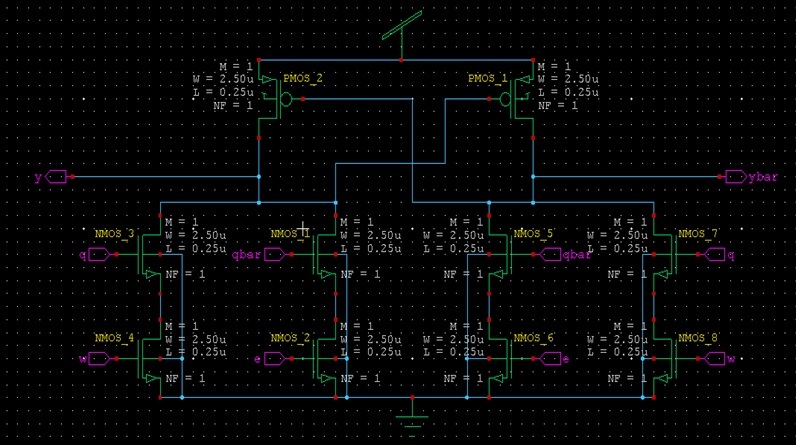 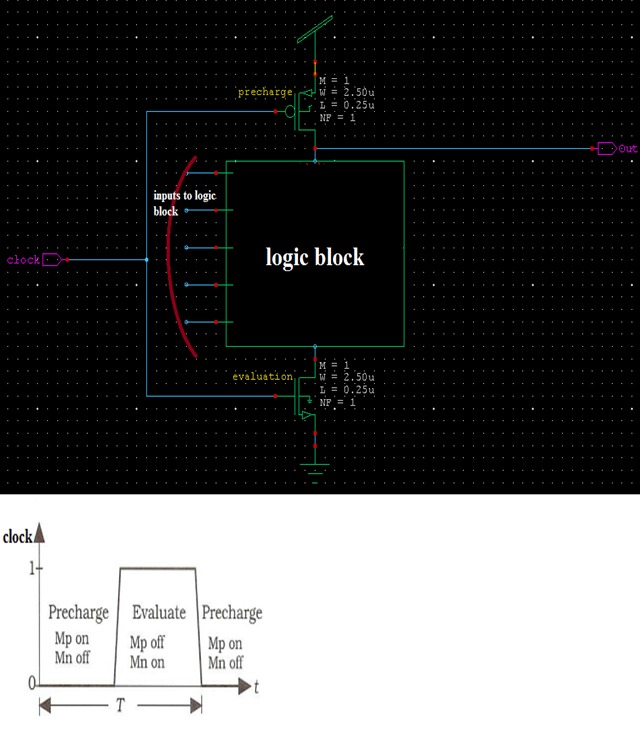 (a). Domino logic: domino logic adds a buffer at the output of dynamic logic to avoid the affect of output high is pre-charged only with limited drive. 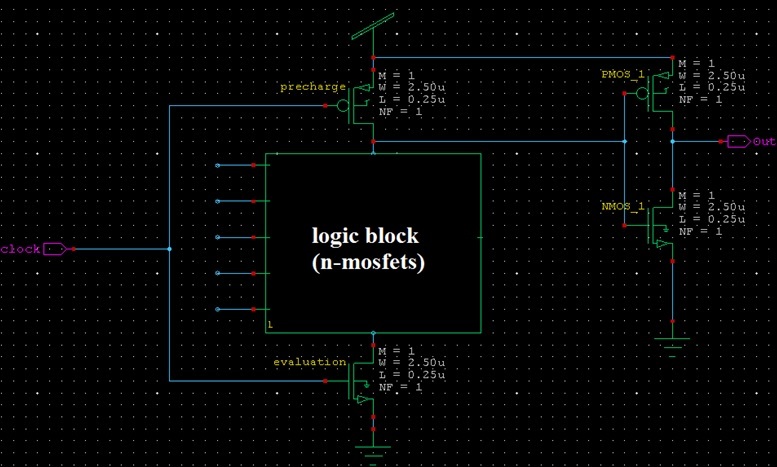 Note: when several logic blocks are cascaded, one clock is not enough to drive entire circuit, solution for this problem is to use two phase clocks as shown below. Use of inverter at the output of dynamic logic can be avoided by using alternate n and p logic blocks.

(c). Keepers logic: It resembles the same structure as domino, but it improves the performance by introducing keeper transistor at the output of dynamic logic. Keeper transistor will avoid the distribution of pre-charge charge over parasitic capacitance and NMOS array. Figure below shows the example of keeper logic. 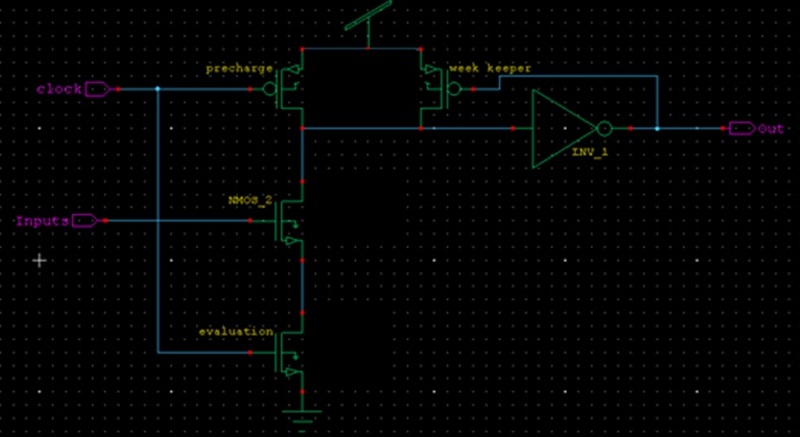 (d). Multiple output domino logic (MODL):it enhance the performance by making use of intermediate nodes to form new outputs. But extra circuit may results to slow down the main output. Figure below shows the example of MODL logic. 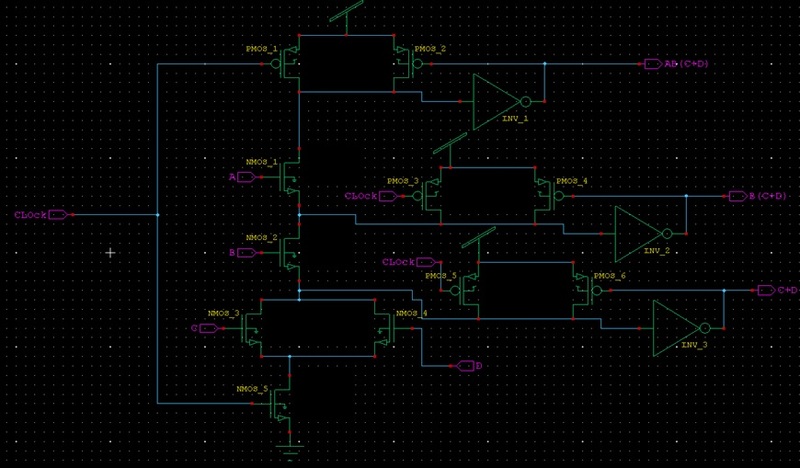 A. Complementary pass transistor (CPL) is a static gate, because its outputs are connected either to VDD or gnd via low resistance path. This logic facilitates the design of library of gates. Disadvantage is that extra circuit is required to generate differential signals. 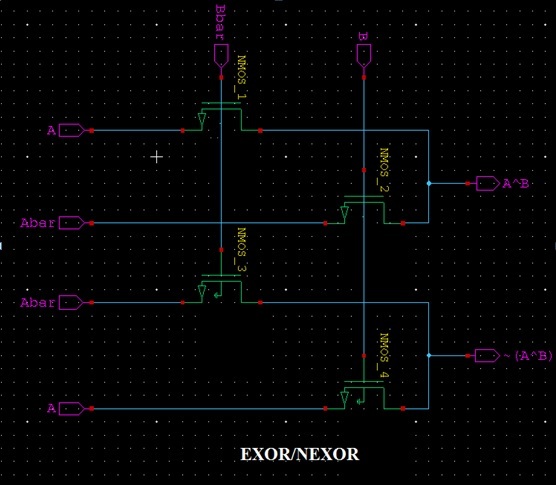 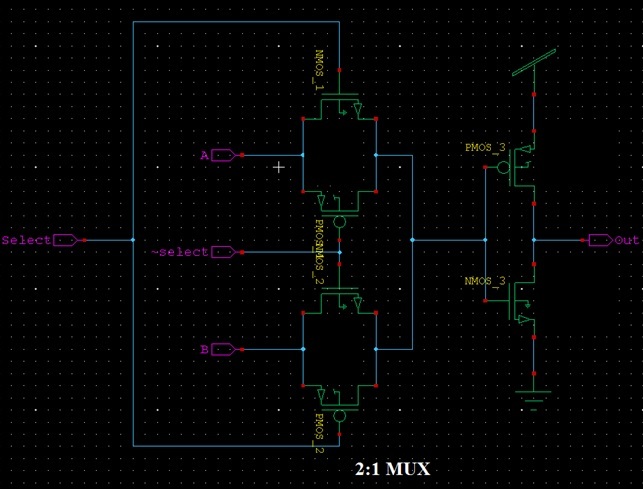 II.  At logic level: Many optimization techniques are available at this level, those are:

* Logic factorization: A Primary means of technology optimization is the    factoring of logic expression. For example consider an expression f=xy+xz+wy+wz this eqation can be factorized into (x+w)(y+z), which results reduced number of transistor count which intern reduces power consumption. Figure below shows the expression is implemented using gates without factorization. 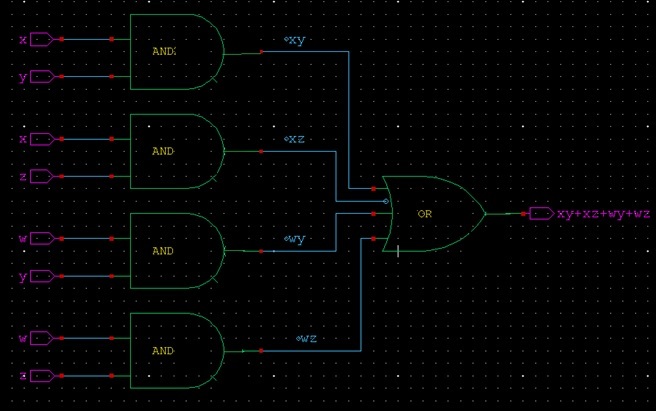 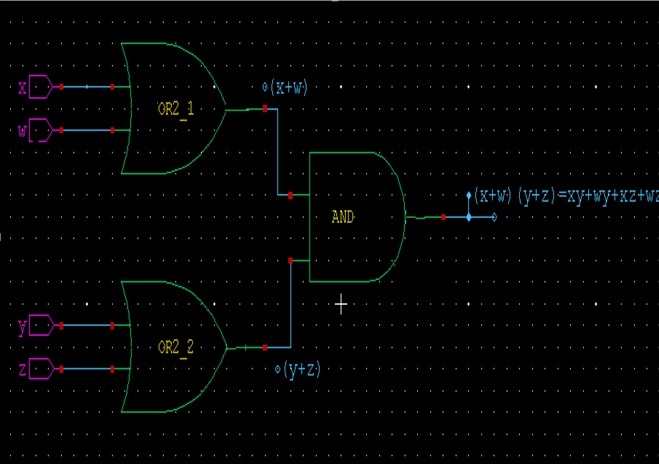 III.  At gate level: optimization techniques available at this level are

*Technology mapping: technology mapping involves the optimal implementation of a Boolean function using gates from a given library. It serves as the final step in the logic synthesis pipeline. Output of the nodes of the logic circuit mapped to library gates under the cost function of load capacitance multiplied by switching activity. To minimize power dissipation, high switching activity points are either hidden within gates or driven by smaller gates. Minimum power realization under zero delay model can be obtained using dynamic programming. 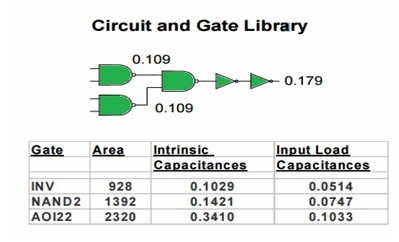 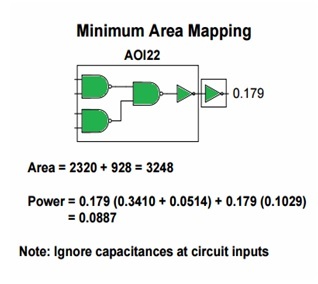 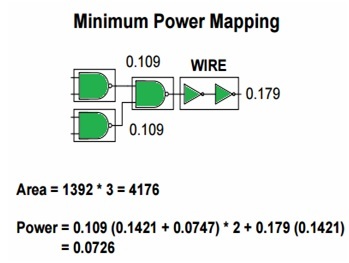 *Phase assignment : phase assignments inverts the inputs to an operation and, at the same time, also inverting the output. This transformation reduces power in the following ways. First, because this transformation adds inverts on nets that previously did not have inverters, it creates opportunity for several other transformations:two inverters next to each other can be merged and removed, and an inverter at the output of the gate may be absorbed into the gate using a composite gate from the library. Second, it can be used to remove inverters from high-activity nets and move then to low-activity nets.

IV.  At RTL level: Optimization techniques available at this level are

V.  At architectural level: optimization techniques available at this level are

VI.  At system level: optimizing a circuit at this level should undergo following process