Market researcher Gartner from its preliminary study reports a 12.6% drop in shipment of  global personal computer shipments in the second quarter of 2022  reaching 72 million units.  Geopolitical, economic and supply chain challenges played a role in  this decline.

“The decline we saw in the first quarter of 2022 has accelerated in the second quarter, driven by the ongoing geopolitical instability caused by the Russian Invasion of Ukraine, inflationary pressure on spending and a steep downturn in demand for Chromebooks,” said Mikako Kitagawa, research director at Gartner. “Supply chain disruptions also continued, but the major cause of PC delivery delays changed from component shortages to logistics disruptions. Enterprise buyers continued to experience longer PC delivery times than usual, but the lead times began to improve by the end of the second quarter, partially because key cities in China reopened in the middle of the quarter.

“To maintain profits as inflation increases costs, the PC industry is having to raise average selling prices (ASPs) despite weakening demand. The reduction in the mix of PCs from Chromebooks, which tend to have low price points, and shift to premium products also helped increase the average ASP. However, an increase in inventory, especially in the consumer channel, could cause an ASP decline as vendors will try to lower inventory.”

Further findings shared by Gartner includes:
The top three vendors in the worldwide PC market experienced declines in PC shipments in the second quarter of 2022, but their ranking remained unchanged. The combination of HP declining 27.5% and Dell declining 5.2% allowed Dell to move to within 0.3 percentage points of HP in market share. Apple was the only vendor to experience growth in the second quarter of 2022, driven by the popularity of the M1 device (see Table 1). 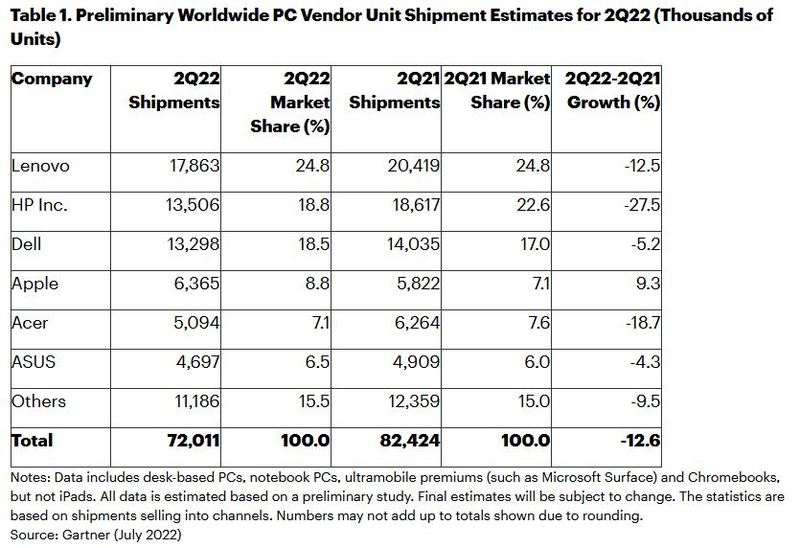 Lenovo’s worldwide PC shipments declined year-over-year, the third consecutive quarter of decline for the company. However, Lenovo grew 2% in the worldwide desktop PC market, partly because the company improved its supply chain in EMEA. HP experienced a decline of 27.5% in the second quarter of 2022, primarily due to a steep decrease in Chromebooks shipments.

Dell’s shipments declined year-over-year for the first time since the third quarter of 2020. Shipments were down across all key regions except Latin America where Dell registered 6.5% growth. Despite the overall shipments decline, Dell’s market share increased 1 percentage point compared to a year ago.

The U.S. PC market declined 17.5% in the second quarter of 2022. Although the market experienced shipment growth in both desktop PCs and laptops (excluding Chromebooks), this growth was offset by a 50% year-over-year decline in Chromebook shipments 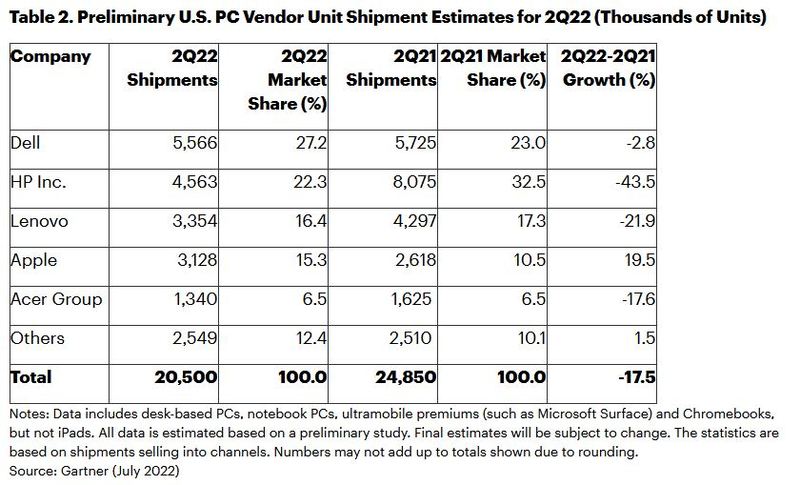 The EMEA PC market was the hardest hit in the second quarter of 2022 with a 18% decline in PC shipments, reaching only 17.8 million units. “This is a major setback in total volume after two years of very strong growth stimulated by COVID-19 and refreshed interest in PCs among consumers and the education segment,” said Kitagawa. “Abandonment or complete relinquishment of operations in Russia due to war in the Ukraine had an even bigger impact on the PC market, as Russian PC shipments for leading PC vendors used to contribute between 5-10% the total EMEA PC volume.”

EMEA also experienced a 20% decline in laptop shipments, while Chromebook shipments declined over 50% year-over-year. This is the result of overall sluggish demand from consumers across many countries in EMEA, struggling with price increases across many products, especially fuel and energy. A very high level of inflation will negatively impact consumer purchase power in the second half of 2022 and possibly into the first half of 2023.

The APAC (excluding Japan) PC market declined 5.2% in the second quarter of 2022, driven by a 16% decline in the China PC market. China’s zero COVID-19 policy dramatically impacted the economy with lockdowns in Shanghai stopping carriers and logistics and any online orders and delivery in Shanghai during the time.

The Japanese PC market declined 10.8% in the second quarter of 2022. The decline was partly impacted by the steep depreciation of the Japanese Yen. PC prices increased steadily as a reflection of the weak currency value. Other influencing factors included rising fuel costs and temporary impact from the China lockdown, tightening IT spending in general.

These results are preliminary. Final statistics will be available soon to clients of Gartner’s PC Quarterly Statistics Worldwide by Region program. This program offers a comprehensive and timely picture of the worldwide PC market, allowing product planning, distribution, marketing and sales organizations to keep abreast of key issues and their future implications around the globe.