With the demand for chips continue to grow in 2021, the leading IC design companies facing limited foundry capacities to takeup the market opportunity. Due to significant demand for graphics card chips  caused by the cryptocurrency market, Nvidia overtakes Broadcom in revenue and take the second spot among the top 10 in 1st quarter 2021.  AMD sees YoY growth of 92.9%, which is the highest % increase on the top 10 list. These figures are based on the latest market data from TrendForce. 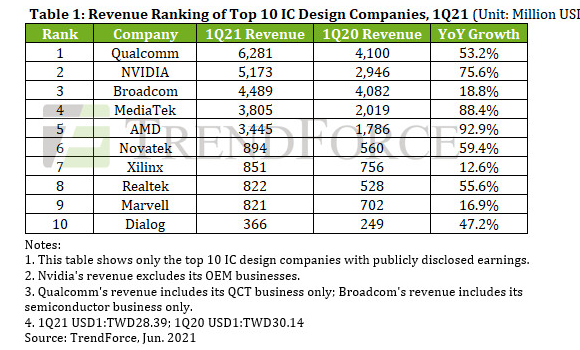 Below is the market research data shared by TrendForce on the top 10 vendors in IC design market:

Market leader Qualcomm saw growths in its smartphone, RF front end, IoT, and automotive departments in 1Q21, during which it posted a revenue of US$6.28 billion, a 53.2% increase YoY, placing Qualcomm firmly in the number one spot. Coming in second place is Nvidia, which overtook Broadcom with $5.17 billion in revenue. Nvidia’s revenue performance can primarily be attributed to massive gaming graphics card demand generated by the cryptocurrency market and the stay-at-home economy. In addition, Nvidia’s Cloud & Data Center business also saw positive growths in 1Q21, thereby contributing to its revenue for the quarter as well.

Broadcom, ranked third on the top 10 list, posted a $4.49 billion revenue in 1Q21. Broadcom’s performance took place on the back of the bullish broadband telecom market, with growths in passive fiber optics and wired networking for data transmission. AMD, on the other hand, continued to benefit from the stay-at-home economy and other such market demands, in addition to its growing foothold in the server market. The company experienced increasing market shares and led its competitors with an impressive 92.9% YoY increase in revenue, the highest on the top 10 list. It should be pointed out that the extreme volatility of the cryptocurrency market, as well as the strict surveillance policies imposed on cryptocurrency trading by several countries, may introduce uncertainties in the future of gaming graphics card revenue for both Nvidia and AMD.

Regarding the performance of Taiwanese IC design companies, MediaTek’s smartphone business unit registered a remarkable 149% YoY growth in revenue mainly on account of high demand from Chinese smartphone brands, which were particularly aggressive in seizing Huawei’s former market share. Furthermore, as Qualcomm’s recent performance in the entry-level and mid-range smartphone markets remained relatively lackluster, MediaTek therefore aimed to fulfill demand from its smartphone clients as its chief goal on a macro level. As a result, MediaTek’s revenue for 1Q21 reached about $3.81 billion, an 88.4% YoY increase, placing the company in the fourth spot.

Novatek derived its performance from high component demand from manufacturers of IT products, TVs, and smartphones. In view of the current shortage of foundry capacity and rising prices of foundry services, Novatek has been able to maintain a stable supply of components via increased prices due to its longstanding, stable, and flexible strategic relationships with Taiwanese foundries (UMC, VIS, and TSMC), China-based Nexchip, and Korea-based Samsung LSI. Hence, Novatek leapfrogged both Marvell and Xilinx for the sixth place while increasing its revenue for 1Q21 by 59.4% YoY.

On the whole, the second wave of the COVID-19 pandemic in India, which has resulted in decreased production targets for Chinese smartphone brands, is not expected to drastically affect IC design companies’ component demand in 3Q21 because of the following factors: First, price hikes of foundry services have already been reflected in chip prices; secondly, market demand for devices remains high; and finally, Chinese smartphone brands still need to maintain a safe level component inventory, as they have yet to resolve the discrepancies among their various materials’ sufficiency levels.

Incidentally, although some expect that the recent spread of COVID-19 among KYEC employees may impact the procurement activities of IC designers that are part of KYEC’s clientele, TrendForce’s investigations of financial reports from various companies in April and May indicate that infections in KYEC facilities will unlikely result in major impacts on the revenues of IC designers in 2Q21.