There are two type of chips, where density of transistors per square mm to impact, they are logic and traceiver block based system on chips, and pure semiconductor memory, and off-course there is a bit of each one in the other. Beyond 7 nm, the market driving higher density logic SoC ICs is basically high resolution graphic intensive, video/picture  processing applications. By using chips made at 3 nm, a video played on your smart phone can be analysed frame by frame, where each frame can be illustrated in written text or audio voice. Visually disabled people can clearly  understand the video through audio explanation, though they are unfortunate to see the picture. Text based illustration of the picture/video can be used for automated driving and robotics. Chips made at 3nm can also enable playing of highly graphic rich, near realistic quality virtual scenes and images. Virtual reality is no doubt a big application for deep node chips. However you don't need all this at edge, when you have the 5G or equivalent fibre connection to your 28 nm chips, which can very well leverage cloud for all this above said examples.

All this tells, there is no extraordinary compelling  demand for chips  made at 5nm and lesser nodes unless you want to give more processing power at edge. For the server market/cloud computing side, it can always empowered with higher processing power, if it is having more transistors in less space.

However if the resources are plenty, you can always find ways to use them. But how much is plenty? Is it 7 nm or 3 nm?

If this is about the application-side, but on the vendor-side, leading semiconductor fabs are still racing in increasing the density of transistors per mm. The unstoppable TSMC soon to make 3 nm chips after successfully manufacturing 5 nm chips for companies such as Apple. Samsung is just behind it.  We could say both are neck to neck in this race. Intel,  a long-time leader in chip fabrication looks to be hesitant to participate in this race at all the costs. It is now ranked three  in terms of integration density, where it still staying on at 7 nm.  There is a close fight for the fourth one in market-revenue between Globalfoundries and UMC. If you look at the next one after UMC, it is Chinese foundries who are really sprinting very fast in this race. SMIC is successfully making 14 nm chips, and next transition is on the way.

If you look at the top two; TSMC and Samsung, TSMC is only into logic, whereas Samsung is leader in both logic and memory, and even in displays, where this density of integration in terms of  display resolution is also a key market-winning parameter.

Apple making its own chips with significantly higher performance compared to its closest rivals, and is choosing both Samsung and TSMC depending on the IC chip requirements. So Apple drives the competition between TSMC and Samsung which finally benefits Apple in negotiating the price per chip.

However TSMC makes chips not only for Apple but for the huge number of fabless chip makers in the world which also includes competitors of Apple such as Qualcomm,  Mediatek, Supermicr (a fast emerging server maker)  and some Chinese chipmakers.

It's hard to figure out where the Globalfoundries to grow in this market, though it has  technology and capabilities backed by IBM, and a regular customer called AMD who has decided to acquire Xilinx.

There are also Japanese foundries still have potential to eat away the above vendors market share.

Let's look at the market growth of the foundry market in 2020. Market researcher TrendForce reported the total revenues of top 10 foundries is estimated to increase by about 18% year over year in fourth quarter 2020. TrendForce finds top 10 foundries’ revenues for 4Q20 are expected to exceed US$21.7 billion. 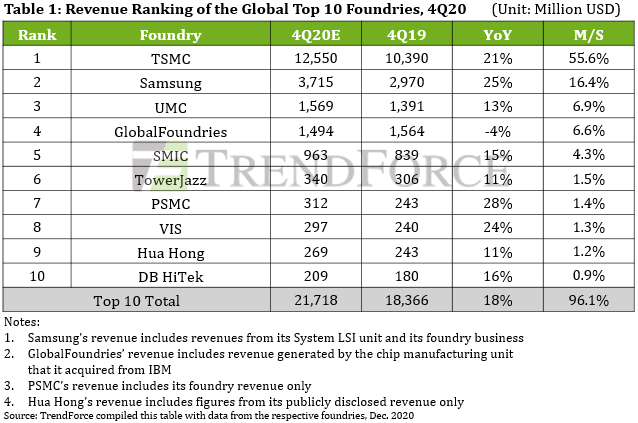 5G smart-phone SoC processor chips and high performance computing chips are enabling the revenue growth of TSMC' 7nm process technology. TSMC is estimated to set a record high in quarterly revenue in 4Q20 with a 21% increase YoY. Samsung is also nearly driven by same trend is employing EUV lithography more aggressively. TrendForce says "development of smartphone SoCs manufactured with the 4nm process and the increase in 2.5D advanced packaging capacities will both propel Samsung’s earnings performance further, driving its revenue up by about 25% YoY in 4Q20."

Though UMC doesn't hold equal competition edge at deeper nodes, but at the well-established nodes such as 14nm, 28nm, 45nm, and 65nm UMC is giving a tough  competition to other foundries in the market. UMC’s revenue from 28nm and below processes is expected to reach a 60% increase YoY in 4Q20, while its total foundry revenue for 4Q20 is projected to increase by 13% YoY, reports TrendForce.  TrendForce says UMC is winning the orders for devices such as driver IC, PMIC, RF front-end, and IoT components resulted in maximum capacity utilization rates for UMC’s 8-inch fabs.

China based SMIC is facing restrictions with equipment procurement due to US sanctions. SMIC’s 4Q20 revenue is expected to reach an 11% decrease QoQ, but a 15% increase YoY, since the company’s quarterly revenue in 4Q19 represented a relatively low base period in comparison, as per TrendForce. TrendForce says Israel based TowerJazz’s revenue for 4Q20 is likely to reach an 11% increase YoY due to stable market demand for RFICs and power Ics.  PSMC’s is seeing very good growth  with a constant influx of client orders generating upward momentum for PSMC’s foundry business. Its revenue  for 4Q20 as per TrendForce is expected to increase by 28% YoY.

TrendForce analysis on some more smaller foundries is below:
VIS’ 4Q20 revenue is expected to increase by 24% YoY on the backs of increased PMIC and LDDI wafer inputs as well as the price hikes for VIS’ foundry services. Hua Hong’s 8-inch capacities are likewise fully loaded due to strong demand for MCU and power discretes, such as MOSFET and IGBT. Hua Hong’s manufacturing operations for CIS and power discretes are expected to continue driving up its 12-inch capacity utilization rate, in turn generating an 11% increase YoY in its revenue for 4Q20. Finally, most of DB HiTek’s current business includes wafer starts for industry 4.0 chips, such as AI, IoT, and robotics chips. DB HiTek’s capacity utilization rate has remained at max levels for 16 consecutive months, and the company’s revenue for 4Q20 is expected to increase by 16% YoY.

Despite explosive growth in some of the areas, TrendForce  alerts companies still need to pay close attention to U.S.-China relations going forward as well as whether the pandemic’s global resurgence will negatively impact purchasing demand for end devices.