During this Covid pandemic, due to work from home situation and other remote management of operations, personal computers market has seen a very good growth in 2020.

Market researcher Canalys has shared its latest findings on total personal computer market where the report includes tablets as part of PCs.

Below are the key findings disclosed by Canalys in its latest report: 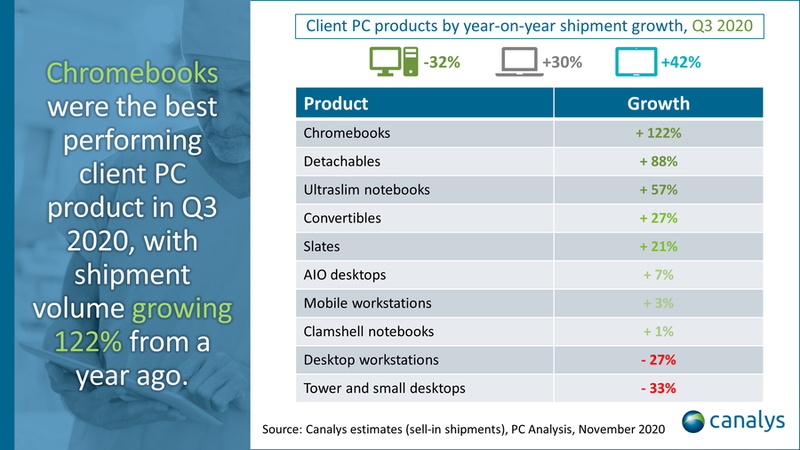 The total PC market (including tablets) enjoyed a second successive quarter of stellar growth, with total shipments of 124.5 million units, up 23% year-on-year.
Lenovo led the global market with 23.5 million tablets, notebooks and desktops shipped followed closely by Apple with 22.1 million macs and iPads. HP, Dell and Samsung rounded out the top five.
Chromebooks were the best performing client PC product in Q3, as shipments grew 122% to a total of 9.4 million. Detachables (tablets and notebooks) grew 88% and were the second best performing category in personal computing. Within desktops, all-in-ones grew 7% despite an overall desktop market decline of 32%.

Note: percentages may not add up to 100% due to rounding.
Source: Canalys PC Analysis (sell-in shipments), November 2020

The worldwide tablet market posted stellar growth in Q3 2020, with shipments of 44.3 million units, up 43% year-on-year. Meanwhile, Chromebook shipments hit a record high of 9.4 million units, growing 122% from a year ago.

Both categories came to the fore in the context of affordable computing, as the pandemic continued to positively influence PC ownership and usage for various purposes. Vendors and channel partners shifted resource allocation towards production and distribution of tablets and Chromebooks to meet this surging demand, which is expected to continue in the short-term.

Note: Unit shipments in thousands. Percentages may not add up to 100% due to rounding.
Source: Canalys PC Analysis (sell-in shipments), November 2020

Across the board, the top five tablet vendors posted both year-on-year and quarter-on-quarter growth, a remarkable performance given the strength of shipments in Q2.
Apple maintained pole position with shipments of 15.2 million units and growth of 47%. Samsung placed second with stunning growth of 80% to break the 9 million unit shipment mark for the first time since Q4 2015. Huawei built on its strong position in China and Europe with growth of 38% to secure third place with shipments of 5.1 million units. Amazon and Lenovo rounded out the top five vendors, with growth of 8% and 59% respectively.

“Tablets have come back from the dead as they deliver the perfect balance of mobility and computing power at a wide range of price points during such a crucial time,” said Victoria Li, Canalys Analyst. The tablet market has been in free-fall since 2015, with the last two quarters being the only quarters of growth in the last five years. “Tablets are a natural choice for first-time PC users who want something uncomplicated and affordable to work with. The natural extension of Android and Ios on tablets makes it easy for parents, students and educators who dabbled with extended remote learning for the first time in their lives and prefer the ease of installing apps that these platforms offer. Another contributing factor is the role these tablets play in the accelerated pace of digital transformation that big and small companies are undertaking. Connected tablets allow businesses to deploy endpoints at crucial stages in their customer and salesforce journeys, thereby helping these businesses ride the storm. Tablets will find themselves at the heart of every digital transformation going forward.”

Note: Unit shipments in thousands. Percentages may not add up to 100% due to rounding.
Source: Canalys PC Analysis (sell-in shipments), November 2020

Vendors selling Chromebooks also saw impressive growth continue into Q3 of this year. HP led the market, more than doubling volumes from a year ago to hit 3.2 million units, with the majority of shipments coming in its home market of the US.

Lenovo hugely ramped up Chromebook shipments, growing over 300%, to move into second place with 1.8 million units. Dell, Acer, and Asus made up the remainder of the top five, with each posting strong growth and record Chromebook shipment volumes.

“Chromebooks emerged as the centerpiece of the education segment’s digital response to the COVID-19 pandemic”, said Ishan Dutt, Canalys Analyst. “Uncertainty in how school terms will proceed remains at the forefront of educators’ minds in the face of secondary lockdowns and protocols related to dealing with infections within a school’s population. As a result, institutions turned to Chromebooks to deliver a relatively budget-friendly and easy to manage contingency to ensure minimal disruption over the course of the school year. Furthermore, Chromebooks have played an important part in satisfying consumers’ and SMBs’ needs to get their hands on a basic computing device. Although production and distribution ramped up, the huge surge in demand led to orders being unfulfilled, and Canalys expects high shipment volumes to continue into the start of 2021.”