At the SEMI Industry Strategy Symposium (ISS) In US: Len Jelinek of IHS forecast  a total semiconductor revenue growth of 7.4% in 2018, with memory growing by 14 % and all other semiconductors by 4.5%, with the growth majorly coming from consumer electronics, with 70 % of chips ending up in consumers’ hands with IoT as key driver. Another chip industry analyst Samuel Wang of Gartner forecast a 7.5 % increase in semiconductor revenue for 2018, reaching $451 billion, with memory the largest contributor to the increase at expected growth of 30 %.

Amid the growth, some of the visible trends in the chip industry includes:

There is increase in amount of money pumped into this sector, not only established players acquiring both big and small semiconductor companies but also there is rise in amount of investment in startup area. China is a huge investor and continue to expand massively the complete eco chain of chip making. US is seeing growth of chips in automotive, IoT and smart everything technology markets. This trend in short term may come down a bit but will continue to rise in long term.

Memory looks like commodity, but not really. There is significant technology leverages leading chipmakers have over copy-paste memory semiconductor fabs. However commoditizing memory is easier and can be done faster compared to processor/digital, RF and analog.  Memory market was lot volatile in 90s but improved and stablized, however still prone to ups and downs for some more years.

IoT is a ticking opportunity for a startup to established palyers and even to non-electronics companies. It's better to not call as "IoT market", IF XYZ field is applied with IoT, so the application/market will be called smart-XYZ market or  e-XYZ market.  This trend will continue longer.

AI trend is more a visual processing or speech processing or big-data analysis or any such stream data processing architectural changes. If the processor is tweaked to handle these complex processing more like a human brain then its called AI processor or AI computing.  This trend  is not new, only thing is AI getting more branded now and its amplified, the hype may go but the core trend will rise in coming years.

Intel is no more at the top, Samsung takes the top number 1 vendor position. The change in top-10 ranking is happening from some time since Japanese chip makers drifting down amid their effort to consolidate and so is the begin of drifting down of mobile phone specific fabless vendors.  The force behind AI processor maker NVIDIA' rise can also push Intel to top provided Samsung or others does not innovate in AI area.  The top 10 will be the area for memory, multi-application scalable AI featured SoC, Automotive and IoT.

In 2018 can Broadcomm and Qualcomm become one company?  Even if that happens, can they grow? That's a tough question. It will become too big an organization to manage and tough to say, they will grow in every area of their dominance/leadership.

Emergence of superfast growing vendor in semiconductors: Not only AI also broad system level architectural changes has the potential to fuel that type of companies.

Guess what issue can gather maximum mass. Its simply the security issue.  Its an opportunity; if you are prepared, or a big threat; if you are not prepared and venerable.  Spectres and meltdowns like threats in security are more  to happen  in coming years.

Node/edge level computing to gain further strength to compete with cloud in 2018.

The china semiconductor market: TrendForce reported China’s IC design industry revenue to reach RMB 200.6 billion in 2017, a yearly growth of 22%. The growth rate is expected to remain at around 20%, totaling RMB 240 billion in 2018, and HiSilicon, Unigroup Spreadtrum RDA and Sanechips Rank Top 3, as per TrendForce.

Below are the Gartner's observations, analysis and comments on semiconductor market growth in 2017:

Memory accounted for more than two-thirds of all semiconductor revenue growth in 2017.

Intel’s PC processor revenue grew more slowly at 1.9 percent, but average PC prices are on the rise again after years of decline following the market’s shift from traditional desktops toward two-in-one and ultramobile devices.

If Broadcom can finalize the acquisition of Qualcomm which in turn completed acquisition of NXP and Samsung’s memory revenue falls as forecast, then Samsung could slip to third place during the next memory downturn in 2019, according a analyst at Gartner. 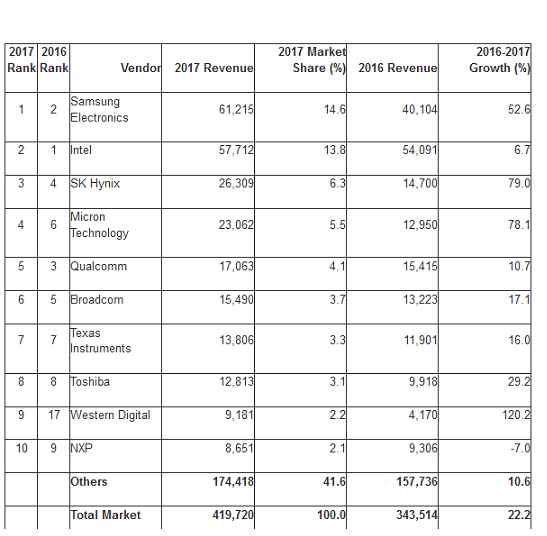