Organic materials often have a lower production cost than traditional electric conductors like metals and semiconductors.  Not all organic systems conduct electricity well, however.  A class of organic materials known as antiaromatic compounds - featuring planar rings of carbon atoms sharing a number of electrons that is a multiple of 4 - have been predicted to be excellent conductors, but this prediction has been hard to verify since antiaromatic molecules are usually unstable.  Now, Shintaro Fujii and Manabu Kiguchi from the Tokyo Institute of Technology and colleagues have performed a systematic study of charge transport in a single, stable antiaromatic molecule.  Compared to a structurally related aromatic molecule (where the carbon rings share an extra two electrons), its record electrical conductance is an order of magnitude higher.

The researchers studied a particular norcorrole-based nickel complex, Ni(nor), which is antiaromatic but stable, and a structurally similar aromatic, porphyrin-based nickel complex, Ni(porph).  They measured the conductivities of the two compounds by means of the scanning tunneling microscopy break-junction technique; in such a setup, the current through a single molecule sandwiched between two parts of a broken junction is measured as a function of applied voltage.   10-4 conductance quanta, Ni(nor) is the most conductive known organometallic complex.´With a conductance of over 4   Ni(porph) was found to have a value about 25 times less, a result confirming the superior conductivity of antiaromatic molecules.  Via theoretical calculations of the molecules’ electronic structure and charge transport property, the scientists were able to identify the origin of the antiaromaticity-enhanced conductance: for Ni(nor), the lowest unoccupied molecular orbital lies closer to the Fermi level (the amount of work needed to add one electron to the system) than for Ni(porph).

Fujii and colleagues also succeeded in demonstrating tunability of the single-molecule conductance of Ni(nor).  By applying a technique known as electrochemical gating, which enables controlling the molecular energy levels relative to the Fermi level of the source and drain electrodes (of the single-molecule junction) by varying an applied electrochemical potential, the researchers demonstrated a 5-fold modulation of the conductance of Ni(nor).

The findings of Fujii and colleagues show that antiaromatic materials are promising low-cost systems exhibiting high electrical conductance.  In the words of the researchers, their study “provides relevant guidelines for the design of molecular materials for highly conducting single-molecule electronics.

Background
Aromaticity and antiaromaticity (Figure 2)
Organic molecules are called aromatic when they feature a planar ring of carbon atoms with resonance bonds - a type of bond intermediate between a single and a double bond, resulting in high chemical stability (i.e., low reactivity).  The archetypal aromatic molecule is benzene, C6H6, featuring a hexagonal aromatic ring of carbon atoms.  -electrons) shared by the ring is always a multiple of 4 plus 2 (for benzene, for example, it’s 6), a property known as Hückel’s rule.pThe number of electrons (so-called
-electrons that is a multiple of 4 (for cyclobutadiene, for example, it’s 4).pAntiaromaticity is a similar property: a planar carbon ring, but with a number of   Such a situation results in chemical instability.
Fujii and colleagues worked with a stable, nickel-based complex featuring an antiaromatic moiety.  Compared to a similar complex with an aromatic moiety, its conductance is an order of magnitude larger, confirming the earlier prediction that antiaromatic molecules are excellent electric conductors.

Conductance
How well a material conducts electricity is expressed via a quantity called electrical conductance, G.  It is the inverse of electrical resistance, R = 1/G.  Conductance is defined as the ratio of the current I running through the material (or, in the present work, a single molecule) and the voltage V across it.   10-5 S.´The unit of conductance is the siemens, S, but conductance values are often given with respect to the conductance quantum, G0 ≈ 7.7
Fujii and colleagues obtained values of the conductance for related antiaromatic and aromatic nickel-based complexes by measuring their current-voltage (I-V) characteristics in a scanning-tunneling microscopy (STM) setup.

About Tokyo Institute of Technology
Tokyo Institute of Technology stands at the forefront of research and higher education as the leading university for science and technology in Japan. Tokyo Tech researchers excel in a variety of fields, such as material science, biology, computer science and physics. Founded in 1881, Tokyo Tech has grown to host 10,000 undergraduate and graduate students who become principled leaders of their fields and some of the most sought-after scientists and engineers at top companies. Embodying the Japanese philosophy of “monotsukuri,” meaning technical ingenuity and innovation, the Tokyo Tech community strives to make significant contributions to society through high-impact research. www.titech.ac.jp/english/ <http://www.titech.ac.jp/english/> 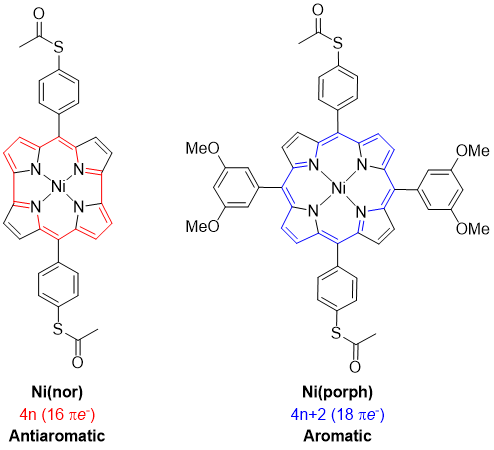 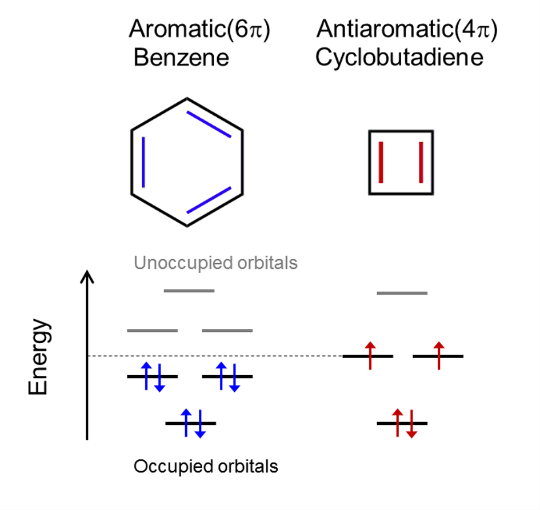