China is racing towards self sufficiency in electronics engineering and more importantly in semiconductor chip manufacturing. China has a plan named "Made in China 2025" (MIC 2025) to achieve 40% local share in IC devices in 2020 and 70% in 2025.

For U.S., semiconductor industry is strategic and is finding it tough to maintain the technology lead it had over years over other regions. The gap is no more that wider. Its like in a race the other participant getting more and more closer. U.S. is still finding ways to maintain the lead. 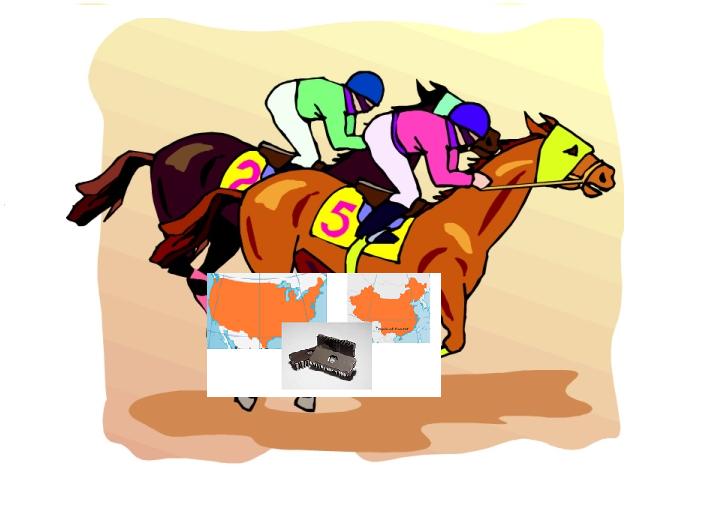 Here is a quick comparison of U.S. and China in various areas of electronics and semiconductor engineering.

Semiconductor fab: The best fabs in China are now making 28nm chips where as in U.S., the 14nm are in full production and 10nm is ready. China is moving very fast in the chip manufacturing so that someday it may become world's silicon chip factory. Meanwhile U.S. may get away from silicon-path to some other nanotech. The race is getting interesting if not 'neck to neck'. Domestic made chips constitute more than 10% of China's semiconductor consumption. China is pumping in 100s of billions of US$s in to the semiconductor research well. In alternative nanotech research, China is also putting its best efforts. Scientists at Peking University in China developed carbon-nanotube field-effect transistors (CNT FETs) performing better than silicon FETs at the same scale.

FPGA/programmable silicon: With Intel/Altera and Xilinx headquartered in U.S., and also some more FPGA companies, China has only one FPGA company. Technology-wise, U.S. is far ahead of China in programmable silicon, its not easy for China to catch up with U.S. in this domain. China backed global equity firm  Canyon Bridge  is acquiring Lattice Semiconductor. Whether U.S. approval authority will approve or not is still to be known.

Memory, DRAM and Flash: U.S. leads not only in DRAM and Flash and also lead in innovative memory technologies such as RRAM, FRAM and MRAM. China can catch up faster in this area but overtaking is very very difficult.

Batteries: China is leading in this market and can be more dominant player in this area but the U.S. companies leveraging its relationship with Japan to build smart battery factories in U.S. In battery industry the innovation happening at tortoise speed, even at that speed, China is still a much of a follower than a leader.

LCD Displays Panels: Due to China's local manufacturing capabilities, the LCD panel based products such as smartphones and Televisions are now more affordable. China is heading towards a top-source of displays panels in future. Cutting edge display-tech innovation in U.S. may interrupt the China's growth in displays.

EDA Software: Either in VLSI design tools and high speed circuit board design, the three U.S. based vendors Synopsys, Cadence, and Mentor Graphics (acquired by Siemens) and many more U.S. companies  dominate this space with China hardly present in this market.

Operating Systems Software: When the world is using Windows and Linux as major OS softwares. The chance of success for a new OS is tough. There is no popular OS from Chinese companies and U.S. is way-way ahead of others in this area.

VLSI IP: U.S. is again way ahead of China in this area. But as the time passes the older IP value shrinks and head towards obsolescence. The one who creates more IP will  be winner. U.S. based companies leveraging Indian VLSI talent and also acquiring India based VLSI companies. U.S. is maintaining a good lead over Chinese companies in this  area. However China's VLSI talent is so huge demanding U.S. companies to sweat more to maintain the lead.

Supercomputers: China has built world's fastest supercomputer called TaihuLight using its own domestically made chips. Building super computers is no more that secret sauce. Not only China even many regions have developed supercomputers. TaihuLight is powered by CPUs developed by Jiangnan Computing Research Lab in Wuxi.

Semiconductor fab equipment: China based Advanced Micro-Fabrication Equipment Inc. has shipped more than 100 tools which  includes dielectric and TSV Etch systems, as well as MOCVD tools used to manufacture light emitting diodes (LEDs) and power devices. Its customers include IDMs and foundries in China, Japan, Korea, Russia, Singapore, and Taiwan.   Around 5-10% of China fab equipment is locally made and is also exported to other regions. Though this tell some success stories about China's semiconductor equipment industry, U.S. bases Semi equipment companies continue to offer <10nm 3D fabrication equipments, which are very difficult to build.

Overall: China is doing a very fast catch up in many areas but in some areas however hard it try, U.S. is still comfortably ahead. China is proactive in some of the new emerging areas, one example is China aiming to establish a national standard for driverless cars. Whenever Chinese investors find any semiconductor companies to match their strategic needs, they are buying them. U.S. seeing a  threat to its industry in China's inorganic growth amid its fast organic growth. The latest companies China-backed investors decided to acquire include semiconductor equipment maker Aixtron and FPGA maker Lattice Semiconductor.

U.S. thinktank is suggesting development of quantum computers and chips for medicine and biodefense systems, termed as radically different chips but very difficult to make them work and mass produce them. This tech expected to give booster power to U.S. in this race.

Along with the competition, U.S. chip companies trying to leverage China as a tech partner.  U.S. based semiconductor company Qualcomm is partnering with Huaxintong Semiconductor to develop a new server chip based on ARM technology.

Suzhou PowerCore is developing a CPU based on IBM's Power architecture, though the venture has raised security concerns. AMD has also created a joint venture to create Chinese x86 server chips.

Note: Corrections were made in the 'FPGA' and 'Overall'  sub-titled paragraphs of this artilce on 9th May 2017.