Taiwan based market researcher EnergyTrend has predicted that India to become the 3rd largest solar market in the world in year 2017. EnergyTrend expects that India to add at least 10 gigawatts to its domestic PV installations in 2017. 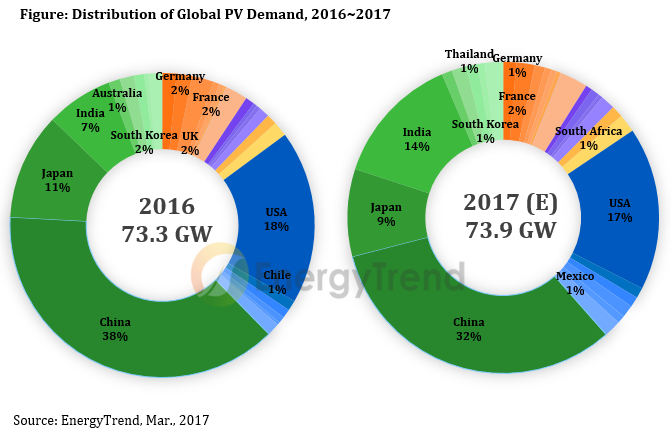 ' “While China remains the largest regional market, its domestic PV installation target for this year is slightly lower than last year’s according to the latest government announcement,” said EnergyTrend analyst Celeste Tsai. “As for the second-place U.S., the country’s current political climate is not conducive to the growth of its PV market. At the same time, Japan will continue to lower its feed-in tariff rates over the next few years. Because India still maintain strong demand for PV products, it has the potential to overtake Japan to become the world’s third largest solar market by taking at least 14% of the year’s total PV demand.”

"India’s cumulative grid-connected PV installations officially surpassed 9 gigawatts at the end of 2016, according to the country’s Ministry of New and Renewable Energy (MNRE). Furthermore, the Indian government has announced the bidding results for the building of the country’s and the world’s largest PV power plant – Rewa Ultra Mega Solar Project. Scheduled to begin operation in 2018, Rewa Ultra Mega Solar Project will make a huge contribution to India’s utility-scale PV demand." stated in the release by EnergyTrend.