In year 2015, the global PC shipments declined by 8.3% to a total of 75.7 million units. In the third quarter of 2016, the fall was 5.7% according to Gartner. The PC market is expected to fall by 8% in 2016 too and would regain its growth in the coming years, Gartner noted.
A continuous fall for eight quarters has given tough time for PC vendors. One of the culprit is smartphone for this fall. People do not need a PC for internet browsing, mailing and social networking when they have a smartphone. Even those people who own a PC are not keen to upgrade for the lack of significant performance boost after upgradation. Also cost of performance packed PCs are not that affordable.

"The global devices market is not on pace to return to single-digit growth soon," said Ranjit Atwal, research director at Gartner. "The effect of currency depreciation on the market is diminishing," added Mr. Atwal. "The second quarter of 2016 was the first since the second quarter of 2015 least impacted by currency depreciation."
Business needs to regain its position by addressing the market requirements.

"We expect premium ultra mobiles will start benefiting from the collective performance and integration of the latest Intel CPU platform and Windows 10," added Mr. Atwal.

When we look at the rankings of the PC, Apple iMac ranked higher in 2016 according to some of the online analysis. Some people go for desktop PCs because of the performance and security, while others prefer smart phones for affordability and for activities such as internet browsing, social networking and such simple tasks. Smartphone comes in handy and are gradually substituting desktop PC due to multiple functions, cost, and other factors. The latest smart phones are lot more powerful than the previous generations making the user to perform the task anywhere in the world. Most of the users are experiencing computer based applications and performance in Smart phones. So, Smartphone are consistently accomplishing computing demands.

Lenovo’s performance matches the overall PC market where there is no recovery in growth, but HP and Dell reporting growth in sales from the second quarter of 2016.

The below table shows the shipment figures in the 2nd quarter of year 2016 : 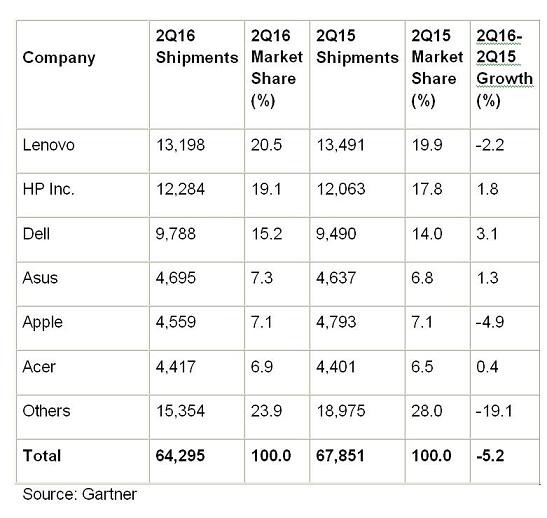 Gartner shares below info on the geographic analysis of PC market:

Asia/Pacific PC shipments totaled 24.7 million units in the third quarter of 2016, a 7.6 percent decline from the third quarter of 2015. Early indicators show that the PC vendors performed better than in the second quarter as they lowered channel inventory coming into the quarter and replenished stock for seasonal back-to-school demand. PC shipments in China are estimated to have declined 4.8 percent. Consumer sales in China were driven by notebook shipments, while the business market was driven by desktop PCs because of cost and computing effectiveness.

PC shipments in EMEA surpassed 19.2 million units in the third quarter of 2016, a 3.3 percent decline from the same period last year. The EMEA market's decline was mainly associated with very weak demand in Eastern Europe, Eurasia, and the Middle East and Africa.