Nowadays most of the electrical and electronic appliances can not be switched off completely without being unplugged. These appliances draw power 24x7 even when they are not performing their primary function.This power is consumed by power supplies which run the circuits and sensors needed to receive a remote signal, soft keypads, switches and displays including miscellaneous LED status lights (user stimuli). This power consumption is known as "standby power." For example - a 32 inch LED TV which under normal use consumes 50W, but when switched off through a remote and plugged to mains would still be consuming ~1W. Imagine a million TV's in stand by for a month! A typical household appliance consumes standby power approximately in the range of 0.5 – 5W, but a home or office has many appliances, which all together amount to significant amount of electricity waste. It is estimated that the standby power is responsible for producing 1% of global CO2 emissions. Therefore reducing unwanted energy consumption associated with standby power can help in saving large amount of power and reducing risk of global warming. 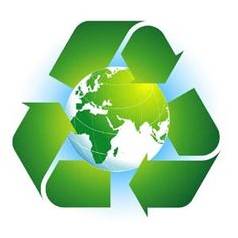 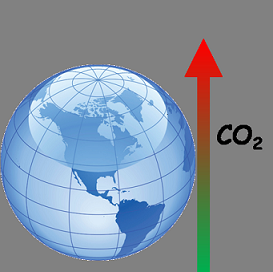 What do the various industry standards say about standby consumption requirements?

There are different international standards which are being followed by various agencies with common aim of reducing standby power consumption.

IEC62301:
IEC 62301 specifies methods of measurement of electrical power consumption in standby mode for “energy labelling”. It is applicable to electrical products with a rated voltage that lies wholly or partly in the range 100V A.C. to 250V A.C. for single phase products. IEC 62301 Clause 4.5 states that the power supply of the appliances consuming less than 5mW during standby mode can be rounded down to zero or can be termed as “Zero Standby” power consumption.

ENERGY STAR:
ENERGY STAR is an international standard for energy efficient consumer products originated in the United States. It was created in 1992 by the Environmental Protection Agency and the Department of Energy. Since then many countries have adopted the program. ENERGY STAR qualified electronics must consume no more than one watt in standby mode.

BUREAU OF ENERGY EFFICIENCY:
The Bureau of Energy Efficiency is an agency of the Government of India, under the Ministry of Power created in March 2002 under the provisions of the nation's 2001 Energy Conservation Act. BEE has different rating for different appliances and BEE qualified electronics must follow norms as per 3.6 clause of IEC 62301. For example the standby power consumption for television with LED backlight should be less than 0.6W.

The Blue Angel:
The Blue Angel (Der Blaue Engel) is a German certification for products and services that have environmentally friendly aspects.The Blue Angel qualified electronics must consume no more than one watt in standby mode.

Some of the strategies used to reduce standby power consumption and total energy of electrical appliances are as follows:

Extending smartness to the electronic devices or appliances:

Sensors and actuators are made to integrate with electronic devices to analyze and take decision autonomously.

Electronic devices are made to connect with network using wireless protocols such as Bluetooth, Wi-Fi, 4G etc. to have better control and monitoring.

Curb idle time – Many appliances such as computers and video game consoles come with an option to configure sleep mode and powering down time interval.

General Block Diagram of an electrical appliances:
If we look at fig.1 below the blocks highlighted under the red dotted line should be mandatorily active. This is to ensure that the user responses and commands are not missed by the appliances under any circumstances. The total power consumption is that of actual load plus the consumption due to this active stage. The normal technique for modern appliances is to keep this stage only active and shut down the main power consuming block when not in use. This means the standby consumption is entirely dependent on the blocks inside the red dotted line i.e. the auxiliary power supply and the user interface.

Hence if we are able to design this stage with minimal power consumption it is easily possible to meet the standby consumption requirement laid out in any geographic region. In the example below, a system with standby power consumption of less than 50mW has been explained. 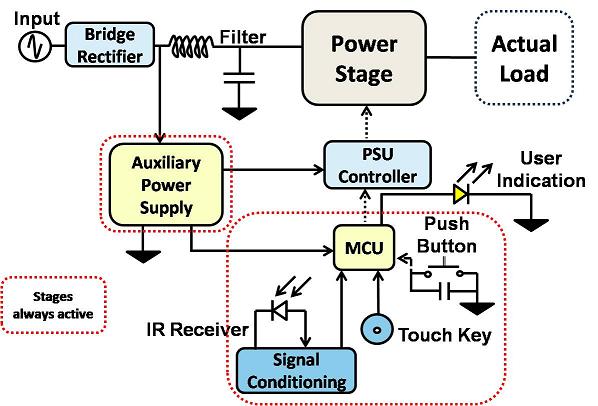 The system has been developed to evaluate the particular feature of VIPer0P device i.e. zero power mode (ZPM). It mainly comprises of following components:

The VIPer0P is a standard fixed frequency monolithic flyback converter from STMicroelectronics and it is capable of handling upto 7W but with some added stages for achieving zero power during standby, as shown in fig.2. The zero-power mode (ZPM) feature enables VIPer0P to work in an idle state, where the system is totally shutdown with no switching activity. 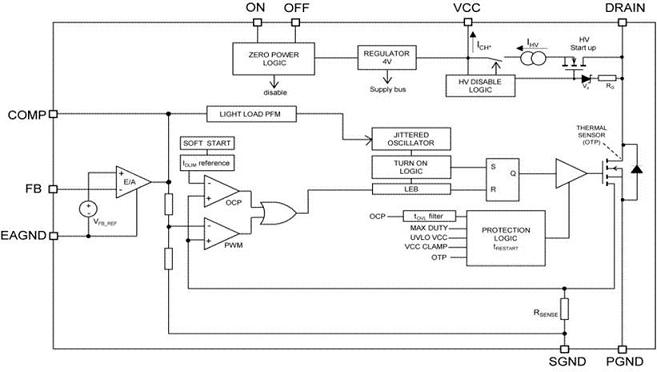 In normal operation the system behaves as a standard flyback converter as shown in fig.4 and fig.6. Both the main load and the auxiliary stage are fed from the main output. Upon a specific user command decoded by the microcontroller the system enters the zero power mode. In zero power mode, there is no switching activity. So no voltage is available at the output. In this particular case the microcontroller will still remain ON and might also be used to switch OFF the main load in case of larger appliances. The key blocks of the VIPer0P that remain alive are the “Zero-Power Logic” block and the 4V regulator as shown in fig.2.The 4V linear regulator supplied from Vcc provides those few micro amperes needed to operate and keep the “Zero-Power Logic” block alive. Both pins ON and OFF are internally connected to this 4V supply line via 50 kΩ pull-up resistors, so either of them can be used to provide a small current to some external circuit, like the microcontroller, as explained above.

VIPer0P is capable of meeting the most stringent energy-saving standards as it has very low consumption and operates in pulse frequency modulation under light load. VIPer0P can switch between modes as shown in fig.3. 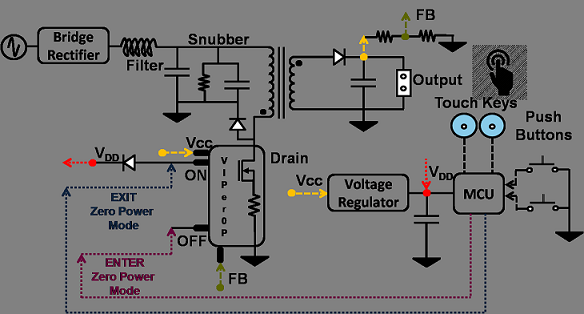 A 7W dual output (+7V and -5V) offline flyback converter for home appliances based on VIPer0P and STM32L052K6 microcontroller has been developed. The system is equipped with push buttons and capacitive touch sense user interface to demonstrate Zero power mode of VIPer0P.
Evaluation board standby power consumption:

The non-isolated flyback topology configuration as shown in fig.4addresses the appliances which have a working cycle initiated by the user and autonomously terminated. There are various appliances which are switched on and off by the user via an RF or an IR remote control, such as air conditioners, TV sets, HI-FI and home cinema systems can also be addressed using flyback topology as shown in fig.6. 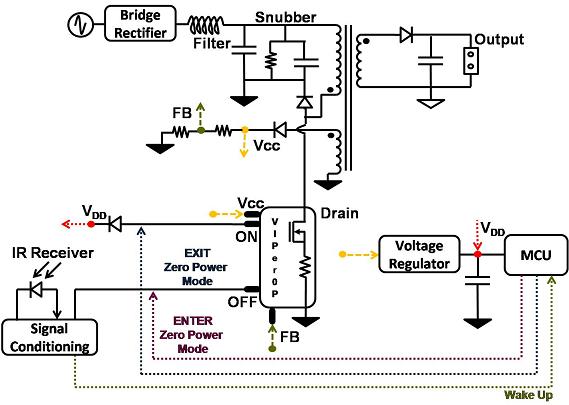 Conclusion:
With added smartness to VIPer0P,the target of zero standby power consumption (according to IEC62301 Clause 4.5) appears to be within easy reach in most of the appliances. This smart saving energy not only reduces electricity bill but also emission of greenhouse gases.