IHS reports unit shipments of artificial intelligence (AI) systems used in infotainment and ADAS systems are expected to rise from just 7 million in 2015 to 122 million by 2025. The attach rate of AI-based systems in new vehicles was 8 percent in 2015, and the vast majority were focused on speech recognition. However, that number is forecast to rise to 109 percent in 2025, as there will be multiple AI systems of various types installed in many cars, says IHS.
“An artificial-intelligence system continuously learns from experience and by its ability to discern and recognize its surroundings,” said Luca De Ambroggi, principal analyst-automotive semiconductors, IHS Technology. “It learns, as human beings do, from real sounds, images, and other sensory inputs. The system recognizes the car’s environment and evaluates the contextual implications for the moving car.”

Below are the other market findings shared by IHS:

AI-based systems in automotive applications are relatively rare, but they will grow to become standard in new vehicles over the next five years -- especially in the following two categories: 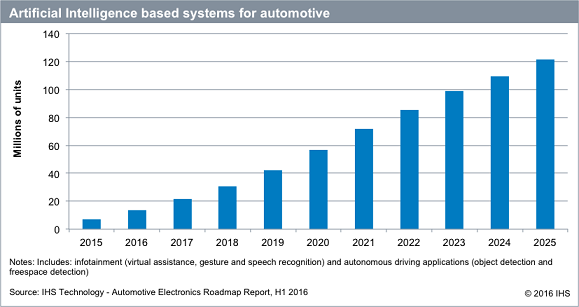 The hardware required to embed AI and deep learning in safety-critical and high-performance automotive applications at mass-production volume is not currently available due to the high cost and the sheer size of the computers needed to perform these advanced tasks. Even so, elements of AI are already available in vehicles today. In the infotainment human machine interfaces currently installed, most of the speech recognition technologies already rely on algorithms based on neural networks running in the cloud. The 2015 BMW 7 Series is the first car to use a hybrid approach, offering embedded hardware able to perform voice recognition in the absence of wireless connectivity. In ADAS applications, Tesla claims to implement neural network functionality, based on the MobilEye EYEQ3 processor, in its autonomous driving control unit.