These days in electronics engineering, developing a product is more about timely pulling of right pool of resources along with having some great technology. Although technology inventions helped companies to have a strong foothold, but for a longer run, it is more of management of resources. The most important is the team of good electronics design engineers. To give an example of a startup with such strategy, the Bangalore-based power electronics start-up PowerSquare has developed a wireless charging pad, which is more convenient to use compared to other in the market. The wireless charging tech is not something new. The team at PowerSquare has understood the market requirements of wireless charging applications, and could successfully launch a product by leveraging the best resources around the world in developing this needy product.

The product named "Tango" wireless charger is a result of combination of, Indian electronics product design skills, American semiconductor chips, and the Chinese electronics manufacturing and also there are good number of made in India passive/mechanical components used in this product. This is a good example of how Indian start-ups can do well in the area of so called electronic system design and manufacturing (ESDM). Designing a physical product is not easy where lot of minor things such as a small connector, and such many mechanical design challenges sometimes become a stumbling block.

I met Pavan Pudipeddi, Chief Executive Officer of PowerSquare at his office in Bangalore. He explained to me the technology, market opportunities and challenges in the wireless charging area:

Pavan and his team's vision was to come out with a product company, and they figured wireless power is a good place to start.

The convenience matters: Pavan says these days most of the smart phones are available in large size screens and also powerful octa core processors, what is important according to Pavan is customer'convenience. Wireless charging offers the convenience. Well if that is about smart phones, he says "from my standpoint what we're seeing today is wireless power barely getting started. We do not even know what kind of applications (coming up in the future). The real innovation is not in power transfer, the real innovation is using wireless power for doing other things". What he hinted is wireless charging is far bigger than the opportunity in the smart phone space.

Issues: In wireless charging, there are already systems available in the market, but a problem with them is the receiver coil need to be aligned with the transmitter coil in terms of physical position. If there is slight shift in the coil placement, the energy will not be transferred.

This problem can be fixed by using a bigger coil in the transmitter, but there are issues of slightly expensive coil and also wastage of power. Lot of other metal devices inside the receiver system gets heated up due to eddy current.

The standards bodies WPC and others are working on multiple array coils of small size placed over an area, and only those coils which are in close contact with the receiver coil are energised. While the standards are still prepared for such multiple coils based wireless charging and is expected to be available by the end of this year. What PowerSquare has done is, it has used a concept similar to what the standards are working on now in using multiple coils, so that alignment issue will be solved. PowerSquare is ahead of industry in bringing out a readily available product to the market solving these issues. While using multiple coils, the technology by PowerSquare recognises multiple receiver devices placed over different coils and energize transmitter accordingly.

Pavan explains: The three problems solved by wireless charging technology developers include, place your mobile device anywhere on the wireless charging pad without any alignment issues. The second issue is charging multiple devices using single pad. The third more interesting challenge is increasing the gap between transmitter and receiver coil (called Z) so that the transmitter can be fixed beneath the table and the Mobile device with a wireless power receiver just placed over the table to get charged.

The first two problems are already solved by PowerSquare in their newly launched product.

Pavan said there was lot of complexity involved in magnetics design, algorithms. "The biggest value in ours (product) is how do you ensure that when two phones are working at same time-- the respective communications are not corrupting each other." quotes Pavan. " 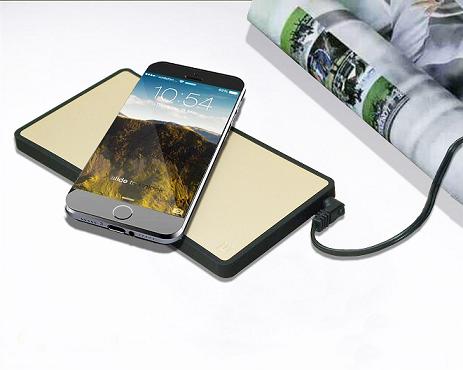 Pavan doesn't forget to mention the effort of his dedicated team of electronics engineers working in Bangalore. Finally his advice for ESDM start-ups: Be ready to face some small things causing big obstructions in bringing your product to market.

For more details on Tango visit the website at: http://www.powersquare.com

Note: The newer version of the article is edited with some corrections and additional points.