IDC reported Indian tablet market grew at a healthy 23% in Q2 2015, recovering from a slow start in Q1. In Q2 2015, India tablet market clocked 1.04 million unit shipments with 22% growth over same period last year and year-to-date growth of 15%. This was mainly due to BIS certifications deadline on power adapters which was earlier slated to be May but then was moved to later period. And hence, few vendors pushed high volumes of their existing non-BIS compliant inventory into channel during early months of Q2 2015, according to IDC.

Indian tablet market continues to grow as market leaders compensate for shrinking volumes of unbranded players. Demand in the commercial segment continues to rise and this segment witnessed 12.4% shipment growth in Q2 2015 against Q1 2015, even as the volumes doubled up against the same period a year ago. Karthik J, Senior Market Analyst, IDC India says, “However, for tablet market to grow further, consumer demand is vital which is losing sheen as tablet as a category is suffering to justify its use case existence between larger smartphones and Notebook PCs.” 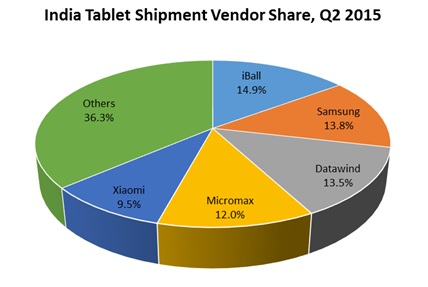 iBall: iBall jumps back to top spot in Q2 2015 coming off from relatively lower shipments in Q1. Its strong presence in entry level tablets i.e. sub $100 is further strengthened with new products added to the line-up. Supplementing this is its expanding retail and geographical reach, which is working well in favour of the brand.

Samsung: Samsung slipped to second spot in Q2 2015 despite posting a healthy double digit growth over previous quarter. Inventory issues in some of their top selling models restricted the overall performance for this brand in Q2. However, new products launched in 7 inches and 8 inches segment gained good traction and is expected to contribute to Samsung’s growth moving forward.

Datawind: Datawind stands at a close 3rd place after Samsung with vendor share of 13.5%. Tele-sales continues to be a key mode of channel for Datawind as it continues to capitalize on TV penetration in the country to push volumes in smaller cities and towns.

Owing to a sharp spike in Q2 due to BIS regulation, Q3 2015 is likely to have lesser shipment intake. However, on a yearly basis, we expect 2015 to post a higher single digit growth over 2014. Consumer market outlook appears to be stagnant but commercial segment is anticipated to witness growth especially through government and education projects.

“A strong differentiating use case specific to tablets, which could either be a solution or a technology itself is required to revive interest in the category. We’ve noticed new use cases such as POS devices, attendance systems, and sales-force automation to drive enterprise demand in the recent past.” Adds Karthik.