Smartphone market is no more hotcake-like

Is smart phone market following the same pattern of PC market, where a high market growth followed by slow growth and then slight-fall? The leading smart phone IC vendors such as Qualcomm and Mediatek have reported lesser revenues compared to previous quarter and also year earlier. In the major markets such as China, where smart phones are no more hot cakes, compared to the demand seen 12 months back.

Below is the sales revenues of leading smartphone chip vendors for the first two quarters of 2015 and also the second quarter of 2014, during which the smart phone market grew fast.

Samsung which is a customer of QUALCOMM, is using more of its own smart phone chips in its smartphones. "Lower sell through in China of certain handset models using our premium-tier chipset", QUALCOMM stated in its latest revenue report. MediaTek cut-down its handset-IC shipment target for 2015.

Gartner has reported its latest findings, where it said worldwide smartphone sales recorded the slowest growth rate since 2013 in the second quarter of 2015. Worldwide sales of smartphones to end users totaled 330 million units, an increase of 13.5 percent over the same period in 2014 .

"China is the biggest country for smartphone sales, representing 30 percent of total sales of smartphones in the second quarter of 2015. Its poor performance negatively affected the performance of the mobile phone market in the second quarter," said Mr. Gupta. "China has reached saturation — its phone market is essentially driven by replacement, with fewer first-time buyers. Beyond the lower-end phone segment, the appeal of premium smartphones will be key for vendors to attract upgrades and to maintain or grow their market share in China."

Apple's double-digit growth in the high-end segment continued to negatively impact its rivals' premium phone sales and profit margins. Many vendors had to realign their portfolios to remain competitive in the midrange and low-end smartphone segments. This realignment resulted in price wars and discounting to clear up inventory for new devices planned for the second half of 2015.

In the smartphone operating system (OS) market (see Table 2), Android's global share was affected by the weak performance of China in the second quarter of 2015 and the strong performance in China of Apple, which has taken share from Android for the last three quarters. "Android saw its lowest year-over-year growth of 11 percent with share reaching 82.2 percent in the second quarter of 2015," said Mr. Gupta. Microsoft continued to struggle to generate wider demand for Windows Phone devices — even at the lower end. "In light of Microsoft's recent cuts in its mobile hardware business, we'll await signs of its long-term commitment in the smartphone market."

"The low barrier to entry into the Android segment will continue to encourage an array of new players, adding to further disruptions coming from Chinese manufacturing and innovative Internet players with new business models that are not reliant on hardware margins," said Mr. Gupta.

Worldwide mobile phone sales to end users totaled 446 million units during the second quarter of 2015. The performance was flat (0.4 per cent) year over year (see Table 3). Vendors that are focused on the emerging markets, such as Huawei, ZTE, TCL Communication and Micromax, benefited from high demand in these markets, while global vendors such as Sony, Samsung and HTC struggled to achieve growth at the high end of the market. 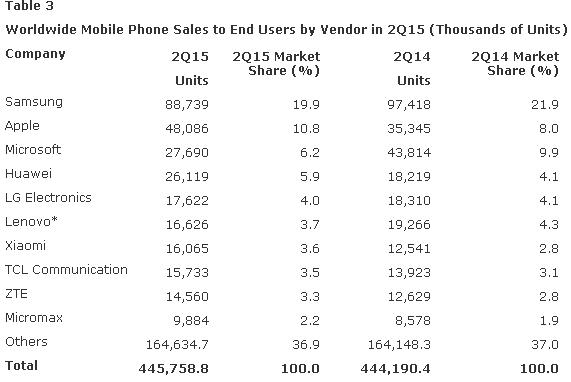