The new memory technology 3D Xpoint announced jointly by Intel and Micron, which may be difficult to call as semiconductor memory, but surely a solid-state memory, is no doubt a disruptive technology. It is not something still in the labs, if you are special customer of Micron or Intel, you can immediately ask for sample pieces of 128Gb nonvolatile 3D Xpoint memory chip, which is 10 times denser and 1000 times faster than NAND Flash memory and 10x slower than latest DRAM. The benefits of 3D Xpoint very clearly outweigh so much against NAND flash memory used in solid-state memory storage and many other applications. Even in case of NOR Flash memory, the speed and density of this new nonvolatile memory technology is a disruptive one. Well, what about replacing the DRAM and SRAM? this technology is 10 X slower in speed compared to DRAM, and surely much slower than SRAM.

So, this is not an one chip replacement alternate to cache memory and the storage. It is for the innovative product designer to find some applications, where there are some possibility of such single memory doing both as cache as well as storage, where data access is more with storage rather than the cache and where the large sets of data is pulled out of storage on most of its processing cycles.

The graphics and virtual reality application performance on smart phones, tablets as well as desktop computers will improve in a great way by using this memory to store graphics data. Over the time, if these devices are improved on speed and performance, the meaning of cache memory may not be relevant. With a 3-D cube like semiconductor manufacturing process already being moving from lab to production phase, you can imagine processor and memory layered one over the other like a multi-storey building delivering processing performance as good as our brain.

The image, voice and any such signature comparison analysis of data can be done far better and faster using 3D Xpoint technology from Intel and Micron.

Today's trends of designing advanced human interface to the computing systems is made easier by using 3D Xpoint memory technology. The large big data like applications such as genomic analysis or some aero space applications can now be run on desktop computers, with the availability of high performance processors as well as equally matching memory such as 3D Xpoint.

Also note, Intel and Micron are not the only companies who are into this kind of research. You can expect soon such similar announcements from Samsung, Toshiba, or maybe someone out from start-ups in universities. Many companies are researching on resistive RAM (ReRAM/RRAM) and Phase change memory (PCM RAM). If you're wondering what is the technology Intel and Micron have used, it is easy guess something related to material properties change. Intel said in its release "The companies invented unique material compounds and a cross point architecture"

Another popular nonvolatile memory FRAM by vendors such as Cypress Semiconductor and Fujitsu is already there in the market but is more for replacing NOR Flash and also SRAM in some microcontroller-based embedded system applications basically for storing program code.

If you see what is the market requirement in terms of size, the demand for memory is like the width of the road for vehicle traffic. If the road is widened, there is always a scope for higher traffic, the same logic can be applied to memory, there is higher memory capacity available there will lot more applications utilising such opportunity. The estimation of demand for storage memory worldwide is in the range of 40 to 50 zettabytes 2020. Present flash memory capacity is having tough time providing that much memory chips. So supply is never an excess in case of solid-state memory.

"The innovative, transistor-less cross point architecture creates a three-dimensional checkerboard where memory cells sit at the intersection of word lines and bit lines, allowing the cells to be addressed individually. As a result, data can be written and read in small sizes, leading to faster and more efficient read/write processes." is the explanation provided by Intel on the concept of this memory fabrication. 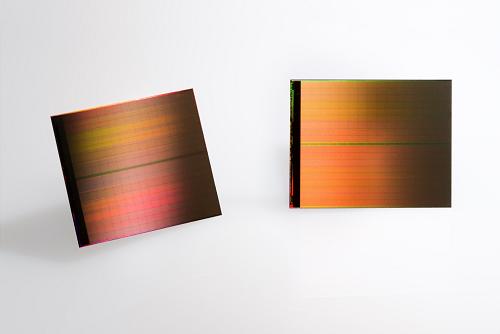 The interesting question now is, what will happen now to the proposal by China's investor to acquire Micron.