Researchers at Singapore's A*STAR’s Institute of Materials Research and Engineering (IMRE) invented a new type of thermoplastic electrically conducting material which can be used as a base material in 3-D printers to print not only electonic circuits but in future, it can also be used to fabricate the three most widely used electronics components; resistor capacitor and inductor.

By using this material in 3-D printers, electronics engineers can assemble electronics gadgets without using traditional printed circuit boards. This invention of highly conducting thermoplastic material lead to creation of 3d modules of resistor capacitor and inductor by simply programming the 3-D printer.

If the copper material is replaced by equally reliable plastic conductor in electronics, it's going to be huge change in the process of how electronics is manufactured. The desktop production of gadgets will become a reality.

“I believe this will revolutionise desk-top manufacturing for electronic gadgets,” said Dr Johnson Goh, IMRE scientist and Head of the Science and Engineering Research Council’s (SERC) Nanofabrication and Characterisation Group and Principal Investigator of this project.

Dr Goh and his team have made prototypes such as a USB connector that can light up a LED bulb, complex three-dimensional circuits, and a wearable flexible sensor by using this thermoplastic conducting material.

The resistivity of IMRE's thermoplastic material is in the range of 0.5-1.0 ohm-cm, about 1,000 times more conductive than most commercially available plastic filaments for 3D printing, according to IMRE . The conducting filament is strong enough to withstand 3D printing process in a conventional thermoplastic 3D printer, so that it doesn't open up.

“Objects in various colours, shapes and textures complete with functional circuits including wires, resistors and capacitors, could one day be printed in the comfort of one’s home,” said Dr Kwok Sen Wai, one of the key scientists in the team.

When it comes to safety, speed and the cost of manufacturing, these researchers claim 3-D printing using their material score higher on these aspects compared to conventional etching and soldering.

The uniformity of conductivity is with less than a 5 percent variation, compared to more than a hundred percent in commercially available conductive filaments.

“We believe that our material will encourage more innovation and entrepreneurship as it will empower people to make prototypes more easily and cheaply,” added Dr Kwok.

IMRE is exploring for partners to commercialise the technology. 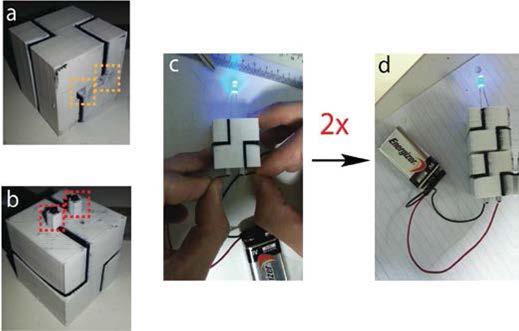 Figure above: Application – creating a complex three-dimensional circuit and lighting up an LED bulb