28 nm node is most growth-enabling node for top three semiconductor foundries; TSMC, UMC and also Globalfoundries to increase their revenue and ranking. TSMC could do even better than others due to success of its 20 nm production. TSMC has a share of 53.7% in the total foundry market, and has increased its revenue by 5 billion in 2014, according to Gartner.

The factors which helped robust growth of foundry business includes inventory stocking in the second quarter by customers, increase of units sold in ultramobiles, the strength of the Apple's supply chain riding the success of the iPhone 6 and 6 Plus in the second half of the year, a conversion of integrated device manufacturer (IDM) revenue to foundry revenue and wafer demand from the early adoption of wearables, according to Samuel Wang, analyst from Gartner.

UMC had lost its share during 2011 to 2013 due to its delay to start early production of 28 nm chips with acceptable yields. Where as in 2014, UMC could increase its share by achieving full production of 28 nm chips, and estimated to have generated a revenue of $4.62 billion to take the second position in the semiconductor foundry ranking, as per Gartner. The No. 3 position went to Globalfoundries with $4.4 billion revenue, representing 9.4 percent of the market, according to Gartner. Find in the table below the remaining other 7 top semiconductor foundries in the world. 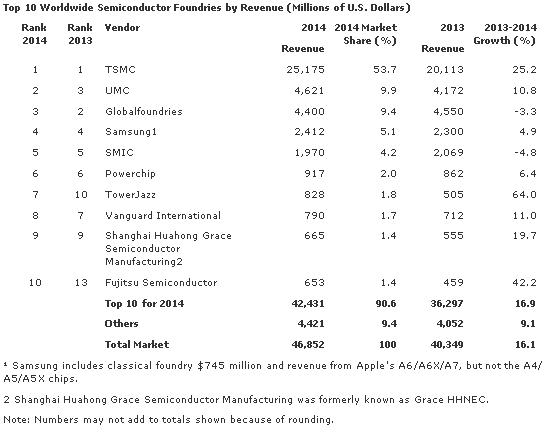