$44.3 Billion semiconductor materials market in 2014 and is growing

Taiwan continues to be the hot place with nearly 1/5th of fab capacity, though China picks up hugely in chip manufacturing. TSMC is far bigger chip manufacturer compared to its nearest competitor. TSMC has all of its fabs in Taiwan.

Chip fabs consume large amount of expensive and special material, in most cases whose manufacturing process is well-guarded intellectual property secret and patented by their suppliers.

Taiwan has consumed a semiconductor materials of worth $9.8 billion, and has grown faster than any other region. Japan claimed the second spot during the same time but not in growth.

The second largest growth in 2014 is in North America with a growth rate of 5 percent, followed by China, South Korea and Europe. See the table below which provides sales revenue and also growth of semiconductor materials by region, as per SEMI. 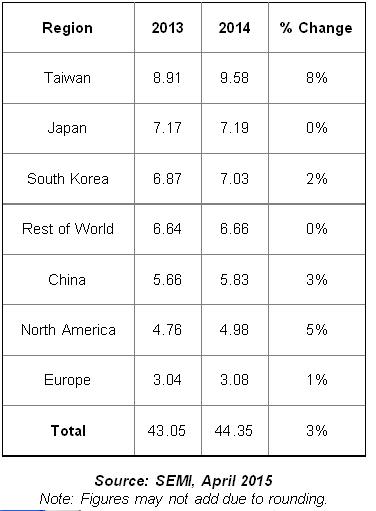 To share you another related comment Ng Kai Fai, President of SEMI Southeast Asia, commented “For 2015 and 2016, SEMI estimates spending of almost US$ 5 billion on front-end and back-end equipment in the Southeast Asia region, and another $14 billion in spending on materials including $11 billion on packaging-related materials. "