There is hardly any region which is neglecting the potential of solar PV, unless it has rich oil resources or lacks enough sunshine. Solar PV is a blessing for those regions which have enough sunlight and have large chunks of dryland with no water sources.

“Last year, the market began to shift toward a more supply-driven market, characterized by high utilization rates, following the more demand-driven market that led to PV manufacturing consolidation,” said Susanne von Aichberger, solar industry analyst for IHS Technology, formerly Solarbuzz. “This trend is expected to continue through to 2019, when the utilization rate at module production is projected exceed the peak utilization rate reached in 2010, when the global market experienced explosive growth.” 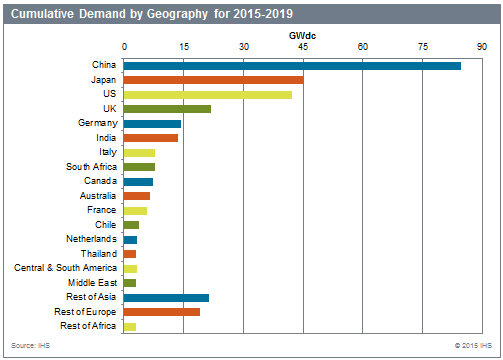 India is ranked 6th in the above chart. India has increased its solar PV electricity generation target from 20 gigawatts to 100 gigawatts by 2022. Most of the States in India could become power surplus due to installation of solar PV generation farms. There are chances that India might outdo what is estimated in the chart above.

"In the five years between 2015 and 2019, IHS expects that 11 global markets will exceed the average annual demand level of 1 gigawatt,” von Aichberger said. “This large number of country markets reduces the risk of another explosion in the global PV market and of an overly strong capacity build-up. An increasing number of markets are entering the post-feed-in-tariff phase and embracing the integration of PV into the electricity market, which will help the market to avoid boom-and-bust situations.”

IHS has forecasted the Average selling prices (ASPs) of standard c-Si modules (i.e., c-Si excluding Super Mono) to decline by 27 percent between 2015 and 2019, reaching $0.45 per watt (W). The share of thin-film modules produced is projected to decline from 8 percent in 2014 to 7 percent this year, as per IHS.

Total module shipments from the 20 leading suppliers were the equivalent of 68% of global PV module demand in 2014, compared to only 60% in 2011. Both Trina Solar and Yingli Green Energy shipped more than 3 GW of modules in 2014, finds IHS.