Is 2015 a big year for global Solar PV; Analysis by IHS on Chinese suppliers

Some of the latest developments gives a clear picture on how big the solar PV growth going to be in 2015. IHS has reported its latest analysis on the Chinese solar PV supplier analysis, where IHS finds:

Most Chinese tier-1 solar PV module suppliers have sold out, until the second quarter of 2015.

The chart below shows Chinese tier-1 suppliers’ capacity, shipment levels and market share through the first quarter of 2015. 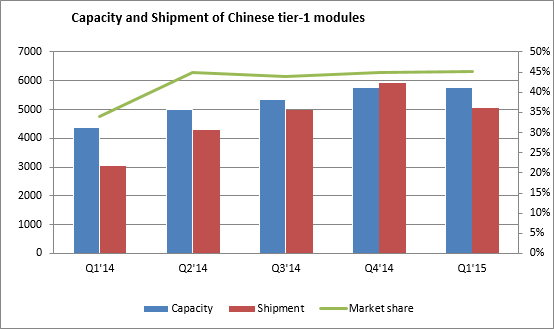 As they are well positioned in the global market, Chinese tier-1 module suppliers will benefit from demand surges in Japan, U.K., South America and Central America. Because some projects in China have been postponed and are not expected to be completed until the first quarter of 2015, the Chinese domestic-market demand is also substantial.

IHS forecasts total global solar PV installations will reach 52.8 GW in 2015, although most installations will occur in the second half of the year. Chinese tier-1 suppliers will again build up inventory, beginning in Q2 2015, to prepare for the expected demand surge in the second half of 2015. Acquisition among manufacturers, and expansion in the module industry, is expected to speed up, since the current capacity of Chinese tier-1 suppliers cannot meet market demand.

Demand surge expected in other regions in Q1

Overall global demand is expected to be unusually weak in Q1 2015; however, the typical seasonal setback will be mitigated by strong demand in Japan, U.K. and other countries. The first quarter (January through March) is the last quarter of the financial year in Japan, where IHS forecasts a 12 percent quarterly increase. In the U.K., the Renewable Obligations Certificates (ROC) scheme for ground-mount systems larger than 5 MW will end at the end of Q1, so there has been a rush of installations in this market; IHS forecasts that 1.6 GW will be installed there in Q1. A demand surge is also expected in Central and South America, including Brazil, Chile and Mexico, where a quarterly increase of 80 percent has been modeled.