At least there are 4 semiconductor fabs with immediate FinFET capabilities which are Intel, TSMC, Samsung and GlobalFoundries. There are other 4/5 fabs progressing faster towards finFETs. With the success of FinFET, most of the logic chip foundries got to move to FinFET process. That's the one of the reason why semiconductor equipment industry body SEMI has forecasted semiconductor equipment sales will reach $43.98 billion in 2014, a 21 percent increase over estimated 2013 equipment spending.

Some more points from the SEMI release includes:
Following two years of conservative capital investments by major chip manufacturers, semiconductor equipment spending is forecast to grow to $43.98 billion in 2014, up from $36.29 billion projected this year. Key drivers for equipment spending are significant NAND Flash fab investments by Samsung in China and Toshiba/Sandisk in Japan, and investments by Intel, including its fabs in Ireland. Most major regions of the world will see significant equipment spending increases. Front-end wafer processing equipment will grow 24 percent in 2014 to $35.59 billion, up from $28.70 billion in 2013. Test equipment and assembly and packaging equipment will also experience growth next year, rising to $3.18 billion (+6 percent) and $2.9 billion (+14 percent), respectively. The forecast indicates that next year will be the second largest spending year ever, surpassed only by $47.7 billion spent in 2000.

"Continued strong demand by consumers for smart phones and tablet computers is driving chip manufacturers to expand capacity for memory, logic and wireless devices,” said Denny McGuirk, president and CEO of SEMI. “To meet the pent-up demand for capacity, particularly for leading-edge devices, we expect capital spending to increase throughout the remainder of this year and continue through 2014 — to post one of the highest rates of global investment for semiconductor manufacturing ever.”

Growth is forecasted in China (82 percent), Europe (79 percent), South Korea (31 percent), Japan (21 percent), North America (9 percent), and Taiwan (2 percent). Taiwan will continue to be the world’s largest spender with $10.62 billion estimated for 2014, followed by North America at $8.75 billion and Korea with $8.74 billion. The following results are given in terms of market size in billions of U.S. dollars and percentage growth over the prior year: 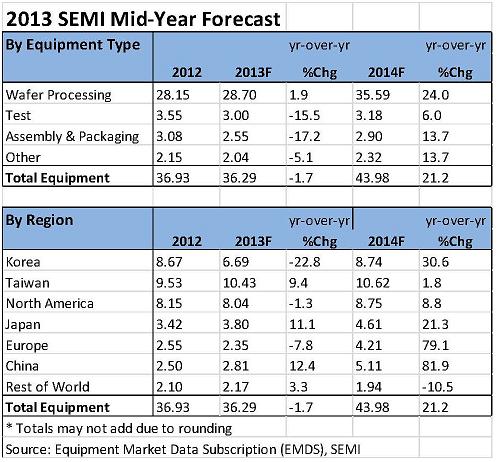