Small semiconductor fabs shut due to Mega and cheaper foundries

Older technology semiconductor fabs getting obsolete faster. Particularly 200mm and less than that silicon-wafer-dia-size supporting fabs are better to be shut rather than running them under loss. IC Insights has come out with the latest report on this subjects of closure of fab during 2009-13. Below is the full release:

Semiconductor manufacturers closed 72 wafer fabs between 2009-2013 and another nine fabs are slated to close in 2014, according to data recently compiled, updated, and now available in IC Insights’ Strategic Reviews online database and the Global Wafer Capacity 2014 report.

Since mid-2007, the IC industry has been paring down older capacity (i.e., ≤200mm wafers) in order to produce devices more cost-effectively on larger wafers. A few fabs have been refurbished for production using larger wafers or for production of “non-IC” products. One example is a 300mm wafer fab operated by Sony that closed, but was retrofitted and has returned to service manufacturing image sensors for the company. Figure 1 shows that 40% of fab closures since 2009 have been 150mm fabs. Qimonda was the first company to close a 300mm wafer fab after it went out of business in early 2009. ProMOS and Powerchip closed their respective 300mm wafer fabs in 2013. 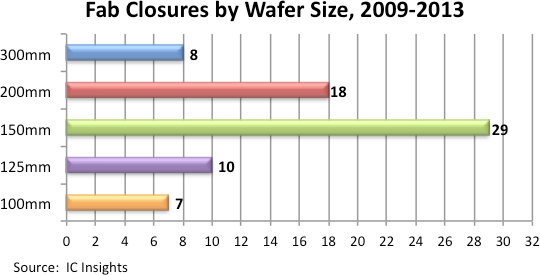 Regionally, semiconductor suppliers in Japan have closed 28 wafer fabs since 2009, more than any other country/region over the past five years. North America (23) and Europe (15) also had double-digit fab closures (Figure 2). 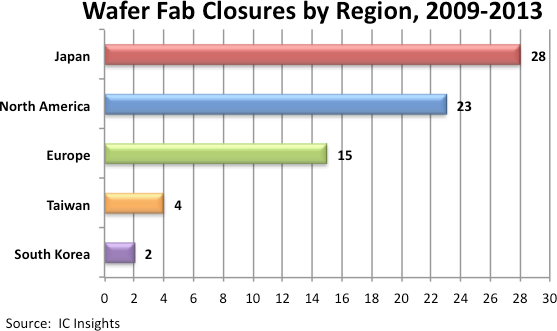 The closing of the two NXP fabs was announced a few years ago and was expected to be finalized in 2011, but was delayed due to strong demand for analog and logic ICs and some discrete components that are manufactured at these facilities. A 200mm fab continues to operate in Nijmegen.

As the cost of new wafer fabs and manufacturing equipment skyrockets, IC Insights expects several more companies to shutter older fabs and transition to a fab-lite or fabless business model in the coming years—news that makes foundry suppliers smile, and equipment and material suppliers a little bit nervous.