Analysis on Intel strategy in processor market by IC Insights

Due to the growth in the smartphone and tablet market and fall in PC sales, Intel looks to be undergoing important changes. Below is the analysis shared by IC Insights on Intel's new strategies as part of its latest processor market report:

x86-processor design partnership in China is the latest bold step to shift the course of the world’s largest IC company.

After missing major market opportunities in fast-growing smartphones and tablet computers, Intel continues to shake itself up in ways that would have been unthinkable several years ago, according to information in IC Insights’ newly released 140-page Update to the 2014 IC Market Drivers Report. The latest jolt occurred at the end of May 2014, when the company announced it was moving x86 microprocessor development outside the protective confines of its own design teams and partnering with fabless Fuzhou Rockchip Electronics in China to accelerate introduction of highly integrated 64-bit processors for entry-level and low-cost tablets as soon as 2015. Both companies will sell the new Intel-branded Atom processors

The unprecedented x86 MPU design partnership with Rockchip—a leading Chinese supplier of competing ARM-based processors—is the latest bold move by Intel to change its approach to new markets, boost sales growth, and finally get in step with major trends reshaping the IC industry since the turn of the century. Intel—still joined at the hip with slumping x86-based personal computers—saw its MPU marketshare slide to 62% in 2013 ($36.3 billion) from nearly 70% five years ago. Intel’s microprocessor sales continue to lag market growth despite years of efforts to become a major player in tablets and smartphones (see Figure 1).

Within the past year, Intel has made these major moves:

• Expanded the scope of the new Intel Custom Foundry business after cautiously testing the waters in contract wafer manufacturing with several fabless programmable logic suppliers. In November 2013, top Intel executives indicated for the first time that the company would consider leading-edge production of custom-foundry ICs that compete with its own product designs, such as x86 microprocessors. In early June 2014, a number of design automation tools from leading suppliers were announced for new 14nm 3D transistor processes offered by the Intel Custom Foundry business. Earlier in 2014, Intel expanded its foundry relationship with programmable logic supplier Altera to include development of multi-chip products with advanced packaging and assembly technology. 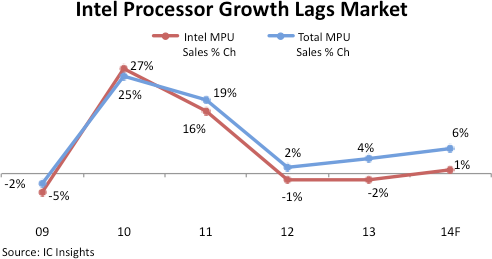 • Quickly added new system-on-chip (SoC) designs to its x86 Atom MPU roadmap, including Intel’s first mobile application processors with integrated baseband functions for connection to wireless cellular networks. While adding integrated application/baseband processors to its Atom roadmap in 2013, Intel decided to use 28nm technology for the first 64-bit quad-core Atom processor with 3G baseband (code-named “SoFIA”) so that its production could be handled by silicon-foundry giant Taiwan Semiconductor Manufacturing Co. (TSMC) instead of waiting to use its internal 22nm 3D transistor processes. Once the first SoFIA processor is introduced in 2H14, TSMC is expected to make a follow-on Atom SoC with integrated 4G LTE baseband functions for availability in late 2015 or early 2016. Intel now expects to move integrated application/baseband processors into its own 300mm wafer fabs in the 14nm technology generation based on a new “Braswell” Atom architecture, disclosed at the Intel Developer Forum in China during April 2014.

• Collaborated with Google to create a 64-bit version of the Android operating system that runs on Intel’s x86 microprocessors in tablets, smartphones, and other mobile devices. The new Android 4.4 OS (“KitKat”) contains a 64-bit software kernel optimized for x86 central processing units and was released in April 2014, well ahead of 64-bit Android versions for 64-bit ARM processors that are being rushed to the market by Qualcomm, Samsung, Nvidia, and others. Intel CEO Brian Krzanich has predicted that the mix of operating systems running on x86-based tablets and smartphones will match the market’s overall makeup of 80-90% being Android systems and 10-20% being Microsoft’s Windows.

• Decided to pay tablet makers for the extra cost of using its first 64-bit Atom SoC processors (“Bay Trail”) in an attempt to boost unit-volume shipments. Intel calls the payments “contra revenue” because the money is subtracted from sales it gets for Atom processors used in lost-cost tablets. These payments are expected to continue through 2014 and begin to wind down in 2015, after next-generation Atom processors (“Braswell” and a completely new “Broxton” architecture) are ready for 14nm production. Introduced in 2013, Intel’s Bay Trail SoC processors were initially designed for higher-end PC-class 64-bit tablets, but the company found the new 64-bit Atom designs were expensive to use in many mainstream and “entry-level” tablets. Independent of the selling price, the 22nm Bay Trail Atom MPUs often resulted in a higher bill of material (BOM) in finished tablets, including more expensive power management subsystems, memory solutions, and motherboards that needed additional printed-circuit layers to handle more components in a system. “And so, we’re providing some contra revenue to offset that bill of material delta over the course of 2014,” explained CEO Krzanich in Intel’s 1Q14 earnings conference call.

Of all the moves made by Intel in the past year, the MPU design partnership with Rockchip underscores a sense of urgency. Intel has found it difficult to move quickly in fast-changing tablet and smartphone markets. One example is Intel having to use TSMC’s foundry capacity for 28nm SoFIA application/baseband processors instead of its own 22nm 3D tri-gate (finFET) processes. Intel also must speed up the design of new low-cost 64-bit Atom processors for inexpensive and entry-level tablets that run Android OS, which have gained tremendous momentum in China and other Asian markets. Therefore, it needs the design help of fabless Rockchip, which has first-hand experience winning business in the highly competitive ARM processor arena.

In the design of highly integrated x86 processors with baseband functions, Intel is providing the Atom architecture and baseband cellular communications capabilities, while 13-year-old Rockchip is contributing other technologies, including embedded graphics circuitry. The first jointly developed quad-core SoC processor is slated to become available in 1H15. Krzanich, who has guided Intel as CEO for one year now, sees partnership with Rockchip as an example of his company’s “commitment to take a pragmatic and different approaches to grow our presence in the global mobile market more quickly.”

Breaking away from its long-held strategy of developing its own MPU designs and manufacturing them internally using industry-leading process technology are major steps for Intel. IC Insights believes it will take another year or two to judge whether Intel's strategic changes translate into higher growth for the industry giant.