“The first quarter this year was the first time a non-Chinese module supplier has taken the leading position in the solar PV industry since the fourth quarter of 2009,” according to Ray Lian, senior analyst at NPD Solarbuzz. “Sharp Solar benefited from seasonally strong end-market demand in Japan, and the ability to quickly increase shipment volumes through a flexible strategy of using outsourced supply from China and Taiwan.” 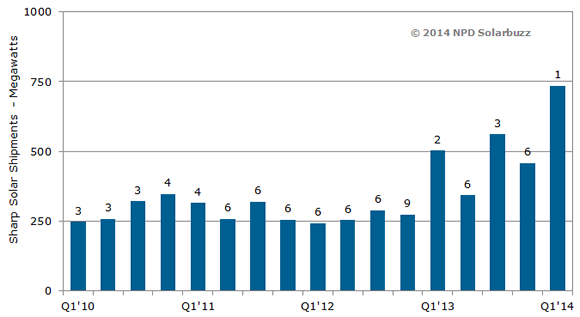 During its previous reign as the industry’s leading PV module supplier, Sharp pursued a vertically integrated strategy, manufacturing its own solar cells and modules. However, during the past few years, Sharp has shifted its emphasis to selling modules manufactured by outsourced partners located mainly in China and Taiwan.

“Sharp’s success during in the first quarter of this year confirms the value of brand-recognition within the PV industry,” Lian said. “It also shows the viability of the so-called ‘fab-lite’ model, in which either internal manufacturing capacity or outsourced supply can be managed effectively to address short-term opportunities. The fab-lite model is now used by several of the leading vertically-integrated companies in the PV industry.”