Below are some of the analysis points shared by IC insights:

The 30 largest O-S-D suppliers accounted for 66% of the total $58.6 billion in worldwide revenues generated by optoelectronics, sensor/actuator devices, and discretes in 2013
Optoelectronics sales grew 5% in 2013 to $29.2 billion, while the sensors/actuators segment was uncharacteristically flat with no growth last year at $8.7 billion, and the discretes market dropped 5% to $20.7 billion.
In 2013, the top 10 suppliers accounted for 34% of combined O-S-D sales (see Figure 1), but it is also worth noting that these companies collectively lost market share in 2013 with the sum of their revenues dropping 2%. Suppliers ranked 11-30th in IC Insights’ new report saw combined dollar sales grow 2% in 2013, while the rest of the smaller O-S-D companies collectively gained market share last year with a 2% increase in combined sales.

Combined revenues of the top 30 O-S-D companies were flat in 2013 compared to 2012 because of the weak Japanese yen-exchange rate that significantly lowered the dollar-sales value of products sold by semiconductor suppliers based in Japan. The average exchange rate in 2013 was 97.6 yen per U.S. dollar in 2013 versus 79.8 yen/dollar in 2012. Because Japanese companies continue to be major suppliers of O S D products worldwide—especially in optoelectronics and discretes—the 18% decline in the 2013 yen exchange rate significantly held down the growth of the entire O-S-D marketplace, when sales are measured in U.S. dollars. If the stronger 2012 yen exchange rate were used, total O-S-D dollar sales in 2013 would have grown 8% to nearly $52.6 billion instead of the 1% increase to $58.6 billion when the weaker 2013 yen value is applied. 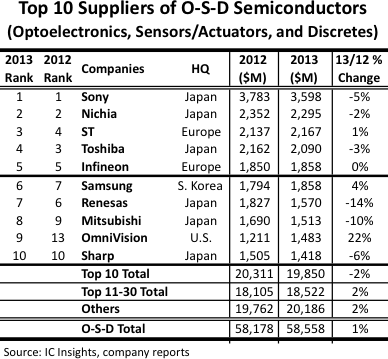 If the stronger 2012 79.8 yen/dollar exchange rate was used in 2013, O-S-D leader Sony—who is the top image sensor supplier—would have recorded a 16% increase in sales to $4.4 billion (versus a 5% decline to about $3.6 billion shown in the table above). Other top 10 O-S-D suppliers headquartered in Japan would have seen these improvements in growth using the stronger 2012 exchange rate: LED-leader and major laser maker Nichia (+19% versus -2%); Toshiba (+18% versus -3%); Renesas (+5% versus 14%); Mitsubishi (+9% versus -10%); and Sharp (+15% versus -6%). Figure 2 shows these changes in the top 10 ranking, based on the analysis in the 2014 O-S-D report, which also provides separate top 10 sales rankings for optoelectronics, sensors/actuators, and discrete semiconductors. 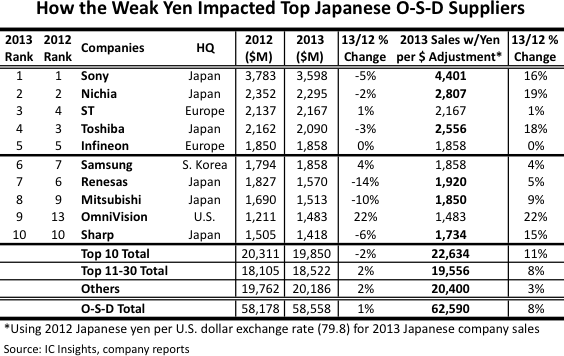