How Raman spectroscopy is revolutionizing the field of healthcare technology? Introduction:
C.V.Raman started off the discussion as of why sea appears to be blue in day? Many assumed, it's because sky is blue and the same light gets reflected by the sea water. But it was Raman who discovered a different answer from his numerous experiments with crystal. He came with a new phenomenon of scattering, finally named after him - Raman Scattering. This theory stands till date and there has been numerous applications developed from this theory of scattering.

This article leads one to a world of bio-physics and how it has a huge potential in dealing with significant medical challenges faced by medical surgeons, oncologist, ophthalmologist and many more. It would take one to tour of how Raman spectroscopy leads medicine research in detecting disease such as diabetes and cancer. Moreover it gives complimentary result as given that by Infrared (IR) spectroscopy and hence increasing the amount of information for better decision making. Raman spectroscopy has ability to create a variance between DNA/RNA, proteins, lipids, tissues and many more and hence it could be used for diagnosing different entities.

Principles:
When a photon strikes an atom, there are basically two ways it can interact. It may exchange energies with electron, hence leading to change of the frequency of interacting photon when it comes out of sample atom (known as in inelastic collision). While other being no exchange of energies (photon just slips away through the empty cavities of atom) keeping the frequency of photon same (known as in elastic collision). Around 99.999% of interaction between photon and electron is elastic collision.

The take away is that there is a little chance of interaction between photon and electron (0.001%), and if that occurs, it leads to a change of frequency (hence change in its energy). This small delta change, once detected can help us understand the vibrational and rotational properties of the target atom, which eventually helps us in comprehending its chemical composition. 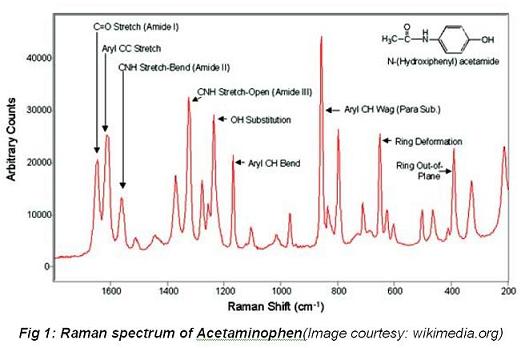 Complimentary to Raman spectroscopy is Infrared spectroscopy, wherein an electromagnetic (EM) source with a range of wavelength is used as a source of photon. A particular wavelength associated with the property of target atom/sample gets absorbed while other EM source wavelength slips through it without any interaction. This absorbed wavelength gives information about the physical characteristic of sample atom.

So this is how interaction takes place between an atom and photon. But things get more interesting and involving when the sample atom is replaced by a living tissue. It’s all together a different ball game. Now we have organic chemicals binding together to make a living cell which interacts with a photon.

So how does this interaction take place? How can we logically rationalize the interaction with meaningful association?

There is basically a need of four instruments to perform Raman spectroscopy as shown in Figure 2:
1. Source (Laser)
2. Illumination and light collected optics system
3. Selection of required wavelength (Notch filter)
4. Creating a spectrograph through a detector (CCD or Photodiode)

A laser used as a excitation source is exposed over a sample which gets scattered in a specular manner due to reflection. This scattered light is collected using Interference filter (or spectrophotometer) and then through detector (photodiode or CCD) the Raman light is captured. This detected light is finally analyzed to produce a Raman spectrum (as shown in Fig. 1)

The photon source may be from different forms of excitation: UV, visible or near infrared (NIR). The detection device can be dispersive monochrometer with CCD (Charge Couple Device) or a Fourier transform (FT) interferometer. To make the whole Raman spectroscopy system happen, one requires experts from various fields including Optics, Engineer, Biology (in our case) and Physics.

The main problem associated with this technique is the involvement of high intensity of laser wavelength itself after collecting it after interaction, also known as Rayleigh scattering. But with an efficient filtering system, other significant wavelengths could be extracted. One of the most easiest and commonly used technique to do so is to use notch filter which cuts off the spectral range of ± 80 -120 cm-1 from the laser wavelength.

Raman Spectroscopy used in detecting Diabetes:
The present technique to quantify blood glucose level is to painfully perform a procedure of collecting blood sample and test it. Researchers have recently come up with non-invasive technique using the principle of Raman scattering. In this technique, a light (from laser ~840nm) is shined on a skin (tissue), whereupon it creates a scattered reflection. This scattered light is passed through a notch filter (to remove the laser wavelength), focused using lens and finally recorded using a spectrograph (via CCD).

According to the experiment conducted by MIT Biomedical optics group, the Raman spectrograph matches with a reference sample of same blood with an R2 of 0.79 and average prediction error of 13.2 mg/dl ( in a statistic language) which gives a good confidence over this technique.

Cancer prognosis using Raman spectrum:
The present technique for prognosis of cancer (as shown in figure 3) is to undergo a surgery known as biopsy, wherein a lesion (extracted tissue to be examined) is evaluated with techniques known as imprint cytology or frozen sectioning. Disadvantages of such a technique are that the following:
1. It is invasive procedure,
2. Subjectively associated with intra-observer variation while visually evaluating the cancer lesion,
3. Increased risk of patient kept in anesthesia,
4. Increased cost of already a costly cancer treatment procedure.

So obviously there is a need to come up with a non-invasive technique, wherein Raman spectroscopy comes into picture. On getting the Raman spectra of cancer lesion and comparing it with a reference normal tissue; undergoing numerous data analysis algorithm, the researchers finally come to a conclusion of difference between the two and hence proving the existence of cancer in subjected tissue.

Take-a-ways:
As seen in the article Raman spectroscopy could be applied on varied scope of field. Clinically it would help in reducing the surgery time and qualitatively improving evaluated results. Though with better instrumentation to decrease measurement error, better data analysis techniques through machine learning and adaptive control process to make it a final real time clinical operation tool would be great service for the mankind and bio-chemistry industry to flourish.

Author: Mr. Uttam M. Pal is a Contributing Editor at EE Herald, Bangalore, India. He completed his masters from Electrical Dept., IIT Bombay. His field of interest lies in Photonics, Biophysics and opto solid state physics. He can be reached at uttampal86@gmail.com.

Medical
Forecast: Medical semiconductor market to grow by 12% in ...