Foundry services and fabless grow whereas merchant chip makers show no or very little growth. Please find the below latest release by IC Insights on top 20 semiconductor vendors in 2013.

IC Insights’ April Update to The 2014 McClean Report will show a ranking of the 2013 top 50 semiconductor suppliers. A preview of the top 20 companies is listed in Figure 1. The top 20 worldwide semiconductor (includes ICs and O-S-Ds—optoelectronics, discretes, and sensors) sales leaders for 2013 included nine suppliers headquartered in the U.S., three in Japan, three in Taiwan, three in Europe, and two in South Korea, a relatively broad representation of geographic regions.

The top 20 ranking also includes three pure-play foundries (TSMC, GlobalFoundries, and UMC) and five fabless companies. It is interesting to note that the top four semiconductor suppliers all have different business models. Intel is essentially a pure-play IDM, Samsung a vertically integrated IC supplier, TSMC a pure-play foundry, and Qualcomm a fabless company.

IC foundries are included in the top 20 semiconductor supplier ranking because IC Insights has always viewed the ranking as a top supplier list, not as a marketshare ranking, and realizes that in some cases semiconductor sales are double counted. With many of our clients being vendors to the semiconductor industry (supplying equipment, chemicals, gases, etc.), excluding large IC manufacturers like the foundries would leave significant “holes” in the list of top semiconductor suppliers. Foundries and fabless companies are clearly identified in Figure 1. In the April Update to The McClean Report, “marketshare” rankings of IC suppliers by product type are presented and foundries are excluded from these rankings.

It should be noted that not all foundry sales should be excluded when attempting to create marketshare data. For example, although Samsung had a large amount of foundry sales last year, most of its sales were to Apple. Apple does not re-sell these devices, so counting these foundry sales as Samsung semiconductor sales does not introduce double counting.

Overall, the list shown in Figure 1 is provided as a guideline to identify which companies are the leading semiconductor suppliers, whether they are IDMs, fabless companies, or foundries. 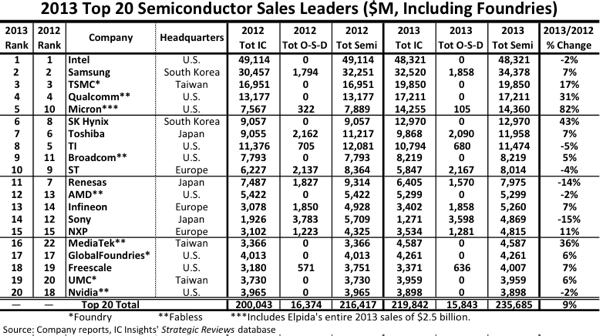 Excluding the foundries of TSMC, GlobalFoundries, and UMC from the top 20 ranking would bring Fujitsu, Marvell, and Sharp into the 18th, 19th, and 20th positions, respectively (Figure 2).

There were numerous changes within the top 20 semiconductor supplier ranking in 2013 as compared to the top 20 ranking of 2012. Spurred by its acquisition of Elpida last year, Micron climbed five spots and moved into the top 5 ranking. Some of the other companies that rose in the 2013 ranking include SK Hynix, which, despite a significant fire and production setback at its largest memory fab in China, took full advantage of the 32% surge in the DRAM market last year and moved up two places into the 6th position. Also, Broadcom moved into the top 10 while MediaTek jumped up six positions to 16th place and into the top 20 ranking for the first time.

MediaTek is experiencing extremely strong demand for its devices in the booming low-end smartphone business in China and other Asia-Pacific locations. In fact, MediaTek’s application processor shipments for smartphones reached over 200 million units last year, about double the 108 million units the company shipped in 2012. Moreover, with MediaTek and MStar expected to merge in 2014, the annual post-merger sales for MediaTek should be over $6 billion, most likely enough to lift the company into the 12th spot in the 2014 ranking.

Another company expected to make a significant move up in the ranking this year by way of acquisition is Avago. After the company’s purchase of LSI Corp., the combined semiconductor sales of the two companies is likely to be well over $5 billion this year, which could propel Avago from its 27th 2013 ranking to as high as 13th in 2014!

In contrast to the semiconductor companies moving up in the ranking, Fujitsu dropped five places to fall out of the top 20 ranking in 2013, going from being ranked 16th in 2012 to 21st last year (the company sold its analog and MCU business to Spansion in August of 2013). Renesas was another “casualty” in the top 20 ranking and fell to 11th place last year from the 7th position it held in 2012.

In total, the top 20 semiconductor companies’ sales increased by 9% in 2013 as compared to 2012, which was more than twice the 4% growth rate for total worldwide semiconductor market last year! It took total semiconductor sales of about $3.9 billion to make the top 20 ranking in 2013.

Figure 3 shows that there was a 97-percentage-point range of growth rates among the worldwide top 20 semiconductor suppliers in 2013 (from +82% for Micron to -15% for Sony). The continued success of the fabless/foundry business model and the strong growth of the memory market (especially the 32% DRAM market surge) last year is evident when examining the six top 20 semiconductor suppliers that logged double-digit growth. As shown, the top six performers in 2013 included two memory companies (SK Hynix and Micron), two fabless companies (MediaTek and Qualcomm), and TSMC (the largest pure-play foundry).

Figure 3 shows that the two top 20 ranked companies that registered double-digit sales declines in 2013 are headquartered in Japan (Renesas and Sony). As previously shown, Japan-based Fujitsu also registered a double-digit decline (-16%) in 2013 and dropped out of the top 20 ranking last year. However, it should be noted that the conversion of Japanese company semiconductor sales from yen to U.S. dollars, at 97.6 yen per dollar in 2013 versus the 79.8 yen per dollar rate in 2012, had a significant impact on the sales figures for the Japanese companies. Using a constant 2012 U.S. dollar versus Japanese yen exchange rate for 2013, the 2013 semiconductor sales of Renesas, Sony, and Fujitsu, would have increased 5%, 4%, and 3%, respectively.

More details on the 2013 top 50 semiconductor suppliers will be provided in the April Update to The McClean Report. 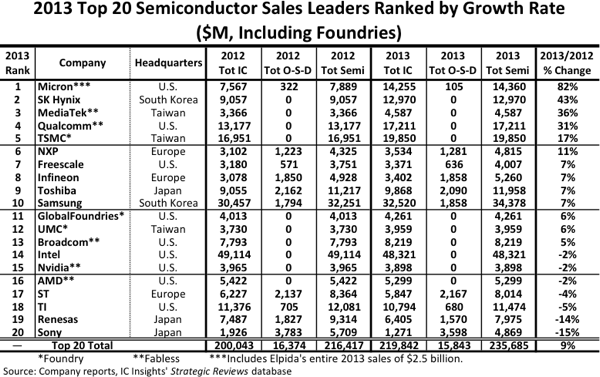