Gartner estimates IT spending of $3.8 Trillion in 2014

Below are the details of the analysis shared by Gartner:

Spending on devices (including PCs, ultramobiles, mobile phones and tablets) contracted 1.2 percent in 2013, but it will grow 4.3 percent in 2014 (see Table 1). Gartner analysts said convergence of the PC, ultramobiles (including tablets) and mobile phone segments, as well as erosion of margins, will take place as differentiation will soon be based primarily on price instead of devices' orientation to specific tasks.

Enterprise software spending growth continues to be the strongest throughout the forecast period. The 2014 annual growth rate is expected to grow 6.8 percent. Customer relationship management and supply chain management (SCM) experienced a period of strong growth.

“Investment is coming from exploiting analytics to make B2C processes more efficient and improve customer marketing efforts. Investment will also be aligned to B2B analytics, particularly in the SCM space, where annual spending is expected to grow 10.6 percent in 2014,” said Richard Gordon, managing vice president at Gartner. “The focus is on enhancing the customer experience throughout the presales, sales and post sales processes.”

The Gartner Worldwide IT Spending Forecast is the leading indicator of major technology trends across the hardware, software, IT services and telecom markets. For more than a decade, global IT and business executives have been using these highly anticipated quarterly reports to recognize market opportunities and challenges, and base their critical business decisions on proven methodologies rather than guesswork. 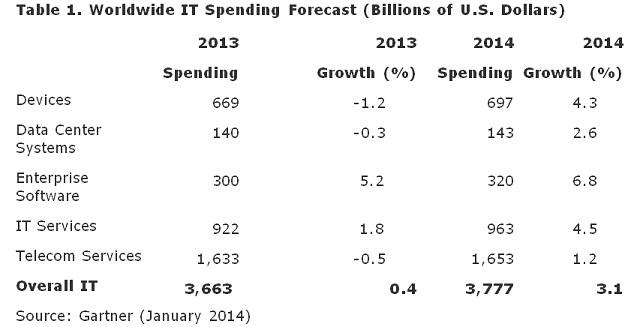 Last quarter, Gartner's forecast for 2014 IT spending growth in U.S. dollars was 3.6 percent, a 0.5 percentage points higher than the current forecast.

"A downward revision of the 2014 forecast growth in spending for telecom services — a segment that accounts for more than 40 percent of total IT spending — from 1.9 percent to 1.2 percent is the main reason behind this overall IT spending growth reduction," said Mr. Gordon. "A number of factors are involved, including the faster-than-expected growth of wireless-only households, declining voice rates in China and a more frugal usage pattern among European customers. The latter coincides in Western Europe with a breakout of fierce price competition among communications service providers to retain customers and attract new ones."

The data center systems spending growth outlook for 2014 has been cut from 2.9 percent in our previous forecast to 2.6 percent. This is mainly due to a reduction in the forecast for external controller-based storage and enterprise communications applications. These segments represent 32 percent of total data center system end-user spending.

Gartner has slightly revised downward the IT services compound annual growth rate between 2012 and 2017. The largest contributor to this revision comes from reductions in IT outsourcing — specifically, in colocation, hosting and data center outsourcing growth rates. "We are seeing CIOs increasingly reconsidering data center build-out and instead planning faster-than-expected moves to cloud computing. Despite these small reductions, we continue to anticipate consistent four to five percent annual growth through 2017," said Mr. Gordon.