LTE to generate nearly half of mobile service revenues by 2018, as per a study

Strategy analytics has reported the Global 4G LTE connections to grow from 238 million in 2013 to 2 billion in 2018. The report named "Worldwide Cellular User Forecasts, 2013-2018" predicts that LTE networks will account for almost half of mobile service revenue globally by 2018, up from under 10 percent in 2013.

The other findings shared by Strategy Analytics includes:

The US, Japan and South Korea are finally starting to see their grip on the global LTE market weaken in the second half of 2013. Their share of global connections will fall from 90 percent at the start of 2013 to 76 percent by year end, with Western Europe in particular generating more meaningful 4G volume as LTE increasingly penetrates operators’ smartphone portfolios.

"Even in 2014, the US, Japan and South Korea will remain the dominant LTE markets, but all eyes will be on China," comments Phil Kendall, Director of Strategy Analytics’ Wireless Operator Strategies service and author of the report. "With TD-LTE licenses now awarded and China Mobile particularly keen to expand and launch its already large pre-commercial network, China should be the catalyst driving lower-cost 4G devices into the global market over the next two years."

Susan Welsh de Grimaldo, Director, Wireless Operators & Networks, added "Mobile operators are increasingly looking to LTE for value creation in the market, with the technology currently generating average revenue per user (ARPU) almost four times the global average. That premium is more a result of the regional mix of LTE connections at present and we forecast just 1.5 percent annual growth in wireless service revenue over the next five years. In this scenario, LTE is more about securing higher-value customers than accelerating market growth." 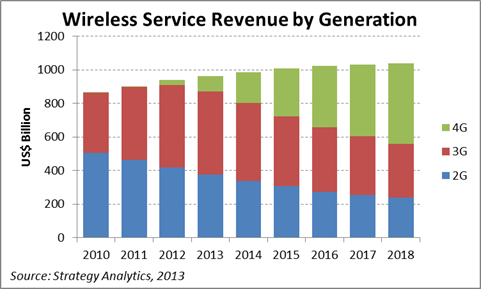 Communication
D-Link to use Sigma's CG5300 G.hn chipsets in its powerl...

Communication
Aquantia and GlobalFoundries collaborate to deliver all c...

Communication
Alliances for interoperability and network connectivity i...

Communication
Skyworks to open a design centre in San Diego to research...

Communication
VoIP and IMS market by Infonetics: up 37% from 1Q13, down...

Communication
QLogic to acquire some of the Ethernet controller assets ...

Communication
M/A-COM to acquire Mindspeed for US$ 272 million

Communication
Oclaro completes sales of its amplifier and micro-optics ...

Communication
Rise in adoption of video in unified communications deplo...

Communication
Cisco, Brocade and Juniper are top scorers in enterprise ...

Communication
Mobile data traffic is expected to grow 12-fold by the en...

Communication
Webinar from Radisys on deployment strategies for VoLTE, ...

Communication
2/3 shipment of LTE baseband chips in 2012 is from Qualco...

Communication
10G accounts for 3/4th of all high-speed ports shipped in...