CCFL backlighting is only used in 10% of LCD TVs

CCFL backlighting in LCD TVs to end probably in 2014. IHS has reported 90% of LCD TVs shipping in 2013 have used LED backlighting.

IHS forecasts a total of 231 million LCD TV panels to be shipped during 2013, in that 207 million will use LED backlighting, with the remainder utilizing the older cold-cathode fluorescent lamp technology. 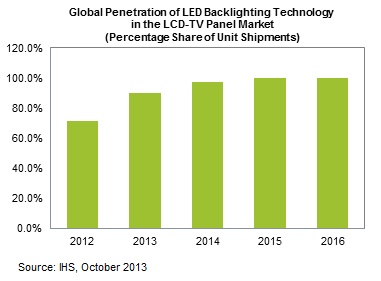 IHS Has shared these below points on this trend:

Sharp of Japan is the only panel supplier with 100 percent of its LCD TV panel manufacturing using LED backlighting in 2013. South Korea’s Samsung and LG are not far behind, with the two companies set to attain more than 95 percent LED usage in their LCD TV panels by the end of this year.

Because there is little growth opportunity left in the LCD TV backlighting market, LED makers are redirecting their efforts to the lighting business.

“LED suppliers that are focused on lighting are predicted to gain market share,” said Jamie Fox, principal analyst for LEDs at IHS. “Some of the companies that have a large market share in LED backlighting, such as Seoul Semiconductor and Samsung, have already managed to shift much of their business to lighting and have done very well in this area, winning market share in recent years.”

LED there be light

In lighting applications, the penetration of LED products compared to alternative technologies is currently very low. Only 2.8 percent of all lamps shipped in 2013 are forecast to use LED technology. This amounts to 520 million LED lamps vs. 18.6 billion lamps in total.

Demand for LED lighting is predicted to increase rapidly during the next five years, driving a projected packaged LED revenue growth of $2.5 billion within the period.

“Because the replacement rates for LED lamps are much longer than those made from competing technologies, annual demand is predicted to slow as the installed base grows for LED lamps,” Fox said. “Suppliers to the LED lighting market, therefore, need to position themselves accordingly in order to capitalize.”

Japan has the largest adoption of LED lamps in 2013. Meanwhile, the highest penetration in terms of sector breakdown can be found in retail and hospitality, at approximately 6 percent LED. This compares to about 1 percent for the residential market.

Backlighting moves into the background

Outside of LCD TVs, LEDs are also attaining high penetration in other backlighting applications, even if growth opportunities are slackening.

By the end of 2015, monitors are predicted to join the applications in reaching 100 percentage LED usage.

The combined market for LED backlighting in all these applications has already gone into decline—even before 100 percent penetration has been reached.

This is driven by a number of factors. One is the reduction in the number of LEDs needed per panel. Another reason shipments are slowing is the increasing usage of organic light-emitting diode (OLED) displays, which do not require LED backlighting.