Most of these wireless networking features are commonly available in most of the electronic systems such as laptop and desktop PC, tablet, smartphone, residential gateways, printers, digital cameras, portable media players, e-book readers, video game consoles, speakers and entertainment systems, and televisions. Wireless communication feature is also increasingly found in cars and other automobiles.

As an example, a unit shipment forecast for Wi-Fi (802.11)-enabled systems and products is provided in Figure 1 below. From a unit perspective, the Wi-Fi industry blew through the 2008-2009 recession as though it never existed. Demand for traditional Wi-Fi products (e.g., routers, switches, access points) slowed up some during the recession, but that drop in demand was made up more than enough by newer Wi-Fi applications such as smartphones and tablet computers.

Unit shipments of Wi-Fi-enabled equipment surged 54% in 2010, followed by 46% in 2011 and another 36% in 2012. For 2013, IC Insights estimates that Wi-Fi-enabled system growth climbed 32% to 2.1 billion units, another very good year for this market segment. From 2012 to 2017, the average annual growth rate for Wi-Fi products is forecast to be a strong 25%. Cumulative Wi-Fi-enabled equipment unit shipments are forecast to reach the 10 billion mark in 2014, six years after achieving one billion cumulative units. Note that the equipment in the unit counts includes APs, NICs, routers, switches, and other Wi-Fi infrastructure products, as well as systems with built-in Wi-Fi functionality such as laptop PCs, tablet computers, smartphones, broadband gateways, video game consoles, 3G/4G small cell devices, etc. 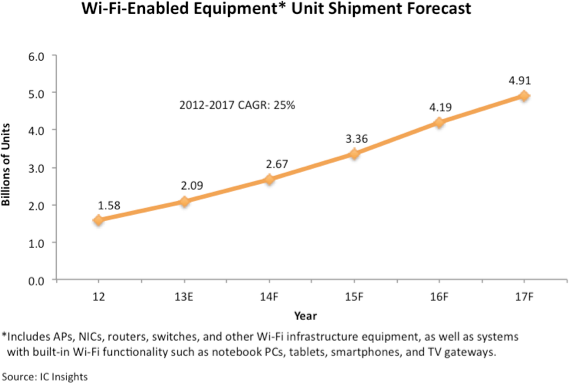 While 802.11n has been the most successful version of Wi-Fi yet, expectations for the next-generation standard—802.11ac—have been set even higher. The extraordinary growth in the number of mobile wireless devices and the data-intensive applications they run has created high demand for wireless connectivity with much greater bandwidth, speed, range, reliability, security, etc. In order to provide reliable, uninterrupted service for a growing amount of bandwidth-intensive applications such as HD video, an exploding quantity of Wi-Fi devices are being used, and for new Wi-Fi applications such as wireless displays and indoor positioning, the new 802.11ac wireless standard is emerging from development labs.

Even though the 802.11ac standard is not expected to be finalized until early 2014, IC manufacturers started shipping “pre-ac” devices in mid-2012 and system products (routers, access points, laptops, smartphones, etc.) started appearing on the market soon after. The Wi-Fi Alliance, which is the organization that certifies whether or not products comply with the 802.11 standards, has split the 802.11ac specification into two certification phases called Wave 1 and Wave 2. Unlike 802.11n, which is available in both the 2.4GHz and 5GHz bands, 802.11ac uses only the 5GHz band (the IEEE describes it as the