IHS says semiconductor magnetic sensors are on track to attain 7 percent revenue growth in year 2013. IHS estimates global market revenue for magnetic sensors will reach $1.73 billion at year-end, up from $1.62 billion in 2012. Next year will see revenue expand again by approximately 7 percent to reach $1.85 billion, with growth continuing during the following three years ranging from 4 to 8 percent. By 2017, industry takings will amount to some $2.20 billion, as shown in the below figure. 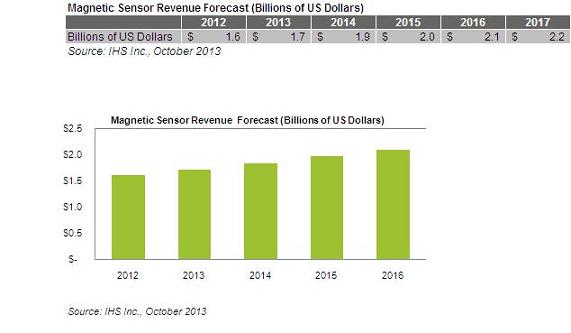 “More than 5 billion magnetic sensors and switches were sold last year, with automotive accounting for 52 percent of revenue and the consumer and mobile sector making up another 37 percent,” said Richard Dixon, principal analyst for MEMS and sensors at IHS. “The rest was in industry, energy, medical and other smaller applications, such as the transport, aerospace and maritime sectors.” The findings shared by IHS includes: Automotive drives main use In the past the sensors enjoyed a remarkable run of growth, helped to some degree by their key role in vehicle safety systems required by mandates. For instance, electronic stability control (ESC) systems engineered to help prevent vehicle skidding were a potent driving force in consumption, given the use of relatively expensive steering-wheel-angle sensors and at least four wheel-speed sensors. ESC mandates helped propel the sensors toward rapid growth during the last several years, especially as they were being enforced in the highly developed automotive markets of the United States, Canada, the European Union, Australia, South Korea and Japan. Hall ICs still rule Overall, Hall-type integrated-circuit (IC) sensors and switches remain the most prominent magnetic sensor device, making up a whopping 89 percent of market revenue in 2012. Applications for Hall sensors include wheel-speed sensing in anti-lock brake systems; acceleration pedals; electronic throttle valve position; crankshaft sensing; and exhaust gas recirculation. In addition, there are as many as 30 applications for simple switches in the body of the vehicle—Hall-effect sensors dominate in this low-cost switch category. Given the saturation of Hall-type devices, however, growth is coming from other areas, including anisotropic magnetoresistance (AMR), giant magnetoresistance (GMR) and tunneling magnetoresistance (TMR), Dixon noted. The change in technology mix is driven more by consumer applications—such as in electronic compasses—than by the automotive segment, which remains conservative in its implementation of new sensors. TMR devices could eventually enter the automotive market because of better performance compared to AMR and Hall ICs, but this won’t occur before the 2017 time frame. Magnetic sensors as a whole seek to capture a wide range of measurements. For instance, the sensors gauge field or compass dimension—the principal type of measurement—in mobile and consumer applications. Meanwhile, both switches and linear sensors are used in cameras and cellphone displays—switches for handling simple on-off functions; linear sensors for autofocus and image stabilization. Other measurements dependent on magnetic sensors comprise speed and position sensing in industrial motor applications, as well as current sensing in motors used in hybrid electric vehicles. AKM of Japan is top supplier The Top 10 suppliers of magnetic sensors account for 87 percent of industry revenue. Leading the pack is Asahi Kasei Microsystems of Japan on the strength of Hall-based electronic compasses for mobile handsets and tablets. AKM is followed, in order, by No. 2 Massachusetts-based Allegro Microsystems; Infineon Technologies of Germany in third place; Micronas of Switzerland in fourth; and Belgium-based Melexis in fifth. Other important suppliers are NXP of the Netherlands, Yamaha and Alps Electric, both from Japan; the American-Austrian manufacturer ams; and Diodes Inc. from Texas.