Compared to incandescent bulb, compact fluorescent tube (CFT) lamp is clearly economical and also affordable. That's the reason why we don't see much of the use of incandescent bulbs. Along with the power saving, there are couple of other advantages of CFT lamps offer, which includes long life, delivering high brightness even at low mains voltages. To take it further, there is now LED lamps offering further reduction in power consumption, even longer life. Also LEDs are environment friendly by not using Mercury (CFTs use mercury). But the big drawback of LED lamps is high initial cost. You don't get a good quality LED lamp anything less than US$10. Many middle-class people hesitate to invest so much to replace CFTs with LED lamps. They are also expecting the price to fall further. That's what exactly happening now in the market, price of LED lamps are falling and sales are rising. Market research and IHS has forecasted the global revenue for packaged LEDs used in lighting applications is set to soar to $7.1 billion in 2016, up from $3.6 billion in 2013. The figure below presents the IHS forecast of revenue for packaged LEDs in lighting. A packaged LED is an LED die with a protective covering with contacts that enable it to be directly soldered to an electrical circuit. 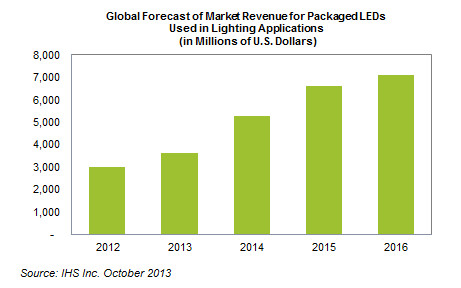 “As retail prices for LED lamps have fallen, it’s become more obvious that they are an attractive alternative to conventional light bulbs, providing long-term savings in energy and replacement costs,” said Stewart Shinkwin, market analyst, lighting and LEDs, for IHS. “Because of this, shipments of LED lamps for lighting are set to increase dramatically in the coming years, rising to 2.4 billion units in 2016, up from 520 million in 2013. The rapid expansion of the lighting market will come as a major boon to suppliers of packaged LEDs, which are seeking the next growth opportunity following the slowdown of the backlighting business.” Below are the findings shared by IHS on the growing market of LEDs for lighting: 1. In the past, rapid growth in the packaged LED market was driven by LCD display backlighting in applications such as mobile phones, notebooks and TVs. The majority of these applications have completed their transition to LED technology. Therefore, while LED demand for these products remains stable, annual unit growth largely is limited to single-digit percentages. 2. In 2012, the lighting sector became the largest end application for the packaged LED market, having finally overtaken the TV backlighting market. Market saturation for LED backlighting has resulted in a number of leading suppliers shifting their focus and development resources toward the lighting industry. 3. With LED lamp retail prices decreasing and more consumers realizing the cost savings LED lamps can provide over long periods of time, penetration of LEDs into the lighting market is set to increase significantly. 4. Along with great opportunity, the projected growth in LED lamps will result in intensified competition among suppliers vying to capture market share. 5. This competition will continue to further drive down prices. IHS forecasts average selling prices for packaged LEDs in lighting to fall to $0.19 in 2018, down from $0.25 in 2016 and $0.41 in 2013. 6. The price erosion, in turn, will reduce the consumer payback period for LEDs, helping to increase adoption. However, declining profit margins will be undesirable for suppliers. 7. LED lamp penetration is already significant in a number of lighting applications such as the retail and hospitality sectors. However, it is the residential sector that IHS forecasts will provide the largest opportunity for packaged LEDs. 8. Packaged LED revenue in the residential sector is forecast to grow to nearly $2.7 billion in 2016, up from an estimated $850 million in 2013. Manufacturers that carve out share early on in this market could garner significant returns as the market booms. In another interesting trend, LED lamps are replacing Fluorescent tube lights which are widely used worldover. Another market researcher NPD DisplaySearch has reported the LED tube penetration rate will reach 6.0% globally in 2013 and jump to 22.3% in 2016. FL tube shipments are expected to reach 230 million units in 2013 and are forecast to climb to 791 million in 2016.

Opto
Samsung targets a new market of "LEDs for photosynthesis"