IHS has forecasted the shipment of embedded secure MCUs (which is also called as cybersecurity MCUs) to rise to 529 million units in 2017. This analysis excludes smartcards. See the picture below showing forecast of global shipments of cybersecurity MCUs in all applications excluding smartcards. 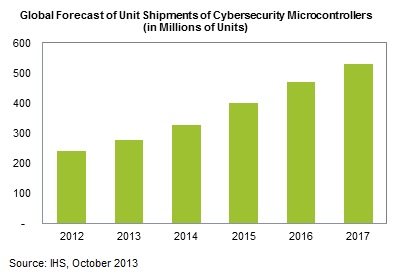 Due to the security risk in embedded systems, the microcontrollers are integrated with features such as cryptography acceleration, secure-key storage and management and secure boot of computing systems. Security embedded MCUs are used in variety of products and electronic devices, from PCs and servers, to electronic peripheral devices and medical consumables, to a broad range of systems that engage in M2M communications.

“Cybersecurity MCUs are playing a key role in defending a world that is increasingly at risk from hackers, cyberattacks, and counterfeit products,” said Sam Lucero, senior principal analyst covering M2M & the Internet of Things for IHS. “Because they are the principal hardware element enabling security in a diverse range of applications, cybersecurity MCUs will see widespread usage and fast growth in the coming years.”

Below is the analysis and findings shared by IHS:

The TPM market represents the application of security technologies to the PC and server markets in a standardized fashion.

Until recently, TPM functionality has mostly been implemented on enterprise PCs and servers. This is now starting to change, as TPMs are also being used in the consumer-oriented Google Chromebook laptop and in certain tablet PCs, such as the Fujitsu STYLISTIC Q572.

Nevertheless, IHS anticipates that through 2017 TPMs will mostly find use in enterprise computing applications. This is because of the complexity associated with activating and configuring a TPM, which is too technically challenging for most consumers. Another inhibiting factor is the great diversity of security needs of enterprises, spanning both financial loss assessments and regulatory mandates.

A wide diversity of end products could potentially make use of cybersecurity MCUs for authentication purposes, including brand protection, revenue assurance, and product safety and reliability. IHS has identified three major clusters of product types that use secure MCUs as authentication co-processors: electronic peripheral devices, luxury goods and medical consumables.

But there are many other applications that could employ authentication technology. For example, during the research for this report, IHS came across the need for secure MCUs to be used in casino gaming devices to comply with gaming regulations.

The M2M area represents the fastest-growing segment of the cybersecurity MCU market, with 20 million units set to ship in 2017, up from 2.7 million units in 2013.

However, if secure MCUs were to become recognized as an essential underpinning of the Internet of Things, growth could be much higher. That is, if secure MCUs are deployed into most Internet-connected devices and become a cornerstone of enabling cybersecurity, the market opportunity for directly-embedded secure MCUs would expand into the billions of units.