Mobile phone designers around the world always eager to know what is the latest technology/device used by Apple in the latest iPhone models. Teardown analysis help them to save money and time from buying the iPhone and breaking it to know what parts it is made up of. IHS provide Teardown analysis of latest Apple products, soon after their launch. IHS has released the teardown analysis of iPhone 5C and 5S. In iPhone 5C, IHS finds the total cost of the bill of materials is US dollar 166 and the cost of manufacturing is US$7, this is for 16 GB version, the 32 GB version costs another $10 more.

Below is the cost analysis provided by IHS on the Apple iPhone 5C model.

While this is considerably less than the $197 BOM and manufacturing cost for the original 16-GB iPhone 5 based on the final results of the IHS teardown conducted one year ago, it’s still on the high end for a smartphone. To attain the cost and pricing required to merit low-end pricing of $400, while maintaining Apple’s customary high hardware margin, the combined BOM and manufacturing expense for the iPhone 5c would have had to amount to about $130.

“Many expected Apple to take an affordable strategy with the iPhone 5c, producing a lower-cost smartphone that would be priced at around $400 in order to address developing markets, such as China,” said Wayne Lam, senior analyst for wireless communications at IHS. “However, the reality of the iPhone 5c is completely different, with Apple offering a phone with a $173 BOM and manufacturing cost, and a $549 price tag—without subsidies. Once again, Apple has stuck to its old tried-and-true formula of optimizing its iPhone hardware gross margins to attain maximum profitability.”

The table presents the preliminary BOM based on a physical dissection of the iPhone 5c conducted by the IHS Teardown Analysis Service. Note that the teardown assessment is preliminary in nature, accounts only for hardware and manufacturing costs and does not include other expenses such as software, licensing, royalties or other expenditures. 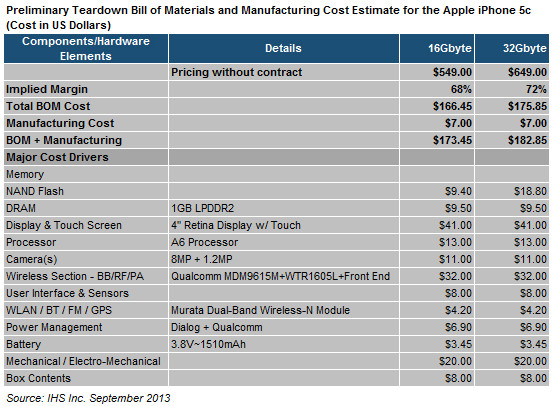 Just one word: plastic
Just as Apple’s pricing strategy for the 5c is familiar, so are the phone’s electronic content and design.

“The iPhone 5c is basically an iPhone 5 in a plastic disguise,” said Andrew Rassweiler, senior director, cost benchmarking services for IHS. “Just as in the original iPhone 5, the 5c uses an Apple A6 processor, a 4-inch retina display, and low-power Double Data Rate 2 (DDR2) DRAM—among other commonalities. Because of this, the iPhone 5c benefits from the normal cost reductions that typically occur for electronic devices during the period of a year. The combination of the design and component reuse—and the plastic enclosure—has allowed Apple to offer a less expensive version of the iPhone, although it’s still not cheap enough to be a true low-cost smartphone.”

Display decline
The display module in the 5c carries a cost of $41, down 7 percent from $44 one year ago.

“Maintaining the same specification and the same suppliers for the panels as the iPhone 5 has helped Apple hold the line on its display costs for the 5s,” said Vinita Jakhanwal, director of mobile and emerging displays and technology at IHS. “Japan Display Inc., LG Display and Sharp have been the main display suppliers for the iPhone 5 for more than a year, allowing Apple to provide them the opportunity to enhance their manufacturing yields and efficiencies.”

Getting the bands back together
The biggest difference between the iPhone 5c and the original iPhone 5 lies in the radio frequency (RF) transceiver, which has been updated to support more 4G Long Term Evolution (LTE) bands. The 5c uses Qualcomm’s WTR1605L RF transceiver, which supports up to seven simultaneous LTE connections during operations. The iPhone 5 used the older RTR8600L RF transceiver, also from Qualcomm, that supported only up to five active LTE bands.

The low-end version of the iPhone 5S with 16 gigabytes (GB) of NAND flash memory has a bill of materials (BOM) of $191. Following is the analysis shared by IHS on iPhone5S:

“The iPhone 5s features a 64-bit apps processor, low-power Double Data Rate 3 (LPDDR3) DRAM, and a novel fingerprint sensor—features that have never before been seen in a smartphone,” said Andrew Rassweiler, senior director, cost benchmarking services for IHS. “In addition, it is very interesting to see that Apple continues to collaborate closely with suppliers to develop unique radio frequency (RF) solutions that give Apple a competitive edge.”

The table below presents the preliminary BOM and manufacturing cost based on a physical dissection of the iPhone 5s conducted by the IHS Teardown Analysis Service. Note that the teardown assessment is preliminary in nature, accounts only for hardware and manufacturing costs and does not include other expenses such as software, licensing, royalties or other expenditures. 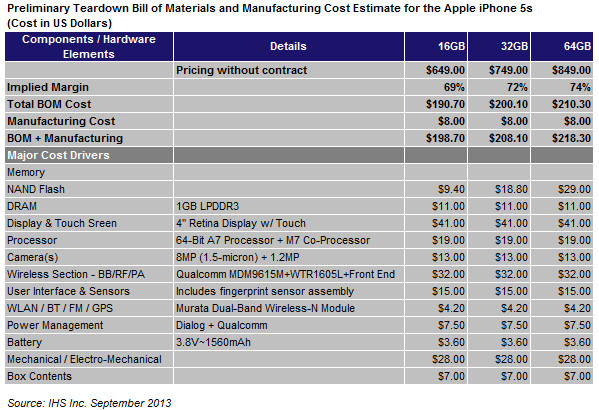 iPhone turns 64
Although other smartphones have included 64-bit graphics processors, the 5s is the first model with a 64-bit applications processor, an innovation that has major implications for the iPhone and for Apple’s other product lines.

“The move to the 64-bit apps processor is largely driven by the need for greater computational power to ensure that the smartphone’s fingerprint sensor works quickly and seamlessly,” said Wayne Lam, senior analyst for wireless communications at IHS. “The processor also boosts the performance of the iPhone 5s’s camera, allowing 120 frame-per-second (FPS) video and 10 FPS photo capture. This design change will likely set the stage for 64-bit processors to be used in upcoming Apple products, including new models of the iPad, the Apple TV and even MacBook Air PCs.”

The 64-bit processor is part of the Apple-designed A7 apps processor, based on a core from ARM Holdings plc. The new 64-bit processor core is called “Cyclone,” as opposed to the 32-bit version used in the iPhone 5 and 5c, known as “Swift.”

Despite the well-publicized feud between the companies, Samsung is the manufacturer of Apple’s A7. This likely is because Samsung has a license to ARM's 64-bit core.

The A7 used in the iPhone 5s costs $19—significantly higher than the A6 used in the original iPhone 5 and 5c, which currently carries a cost of $13.

In parallel with the upgrade to 64-bit computing, Apple has updated the memory of iPhone 5s to LPDDR3, marking the first time that the IHS Teardown Analysis Service has identified this advanced type of DRAM in an electronic product. Apple probably used this high-speed, cutting-edge memory—as opposed to the LPDDR2 employed in the original iPhone 5 and 5c—to support the fast processing speeds of the A7.

Another major difference between the iPhone 5s and the original iPhone 5 lies in the RF transceiver, which has been updated to support more 4G Long Term Evolution (LTE) bands. Like the iPhone 5c, the 5s uses Qualcomm’s WTR1605L RF Transceiver, which supports up to seven simultaneous LTE connections during operations. The original iPhone 5 utilizes the older RTR8600L RF transceiver, also from Qualcomm, which supported only five active LTE bands.

One of the biggest-ticket items in the iPhone 5s gets no change: the display and touch-screen subsystem. Maintaining the same specification and the same suppliers for the panels as the iPhone 5 has helped Apple hold the line on its hardware costs for the 5s. Japan Display Inc., LG Display and Sharp have been the main display suppliers for the iPhone 5 for more than a year, allowing Apple to provide them the opportunity to enhance their manufacturing yields and efficiencies. NAND flash has also not made any significant advances with the 5s, and the amount of the memory content in the phone remains the same.

The table below presents major component suppliers for the iPhone 5s.

Higher prices for higher-end phones
The combined BOM and manufacturing cost for the midrange iPhone 5s with 32 GB of NAND flash is estimated at $208. The 64-GB model’s cost totals $218.

To tell you how hot-cakes are these two models, Apple has shared the initial sales data where it said it has sold a record-breaking nine million new iPhone 5s and iPhone 5c models, just three days after the launch of the new iPhones on September 20.

“This is our best iPhone launch yet―more than nine million new iPhones sold―a new record for first weekend sales,” said Tim Cook, Apple’s CEO. “The demand for the new iPhones has been incredible, and while we’ve sold out of our initial supply of iPhone 5s, stores continue to receive new iPhone shipments regularly. We appreciate everyone’s patience and are working hard to build enough new iPhones for everyone.”