US contributed hugely for the growth of fabless semiconductor biz

When it comes to semiconductor technology space, United States holds the leading position in multiple areas. US has most advanced semiconductor fabs in the world and also the best fables semiconductor companies in the world. As for the latest study by IC insights, customers in the Americas region (primarily the U.S.) are expected to account for nearly two-thirds of pure-play foundry sales in 2013, a slight increase from 2012. IC Insights forecasts that Americas region will represent 70% of TSMC’s sales, 67% of sales from GlobalFoundries, and 47% of sales from both UMC and SMIC, see the figure below. 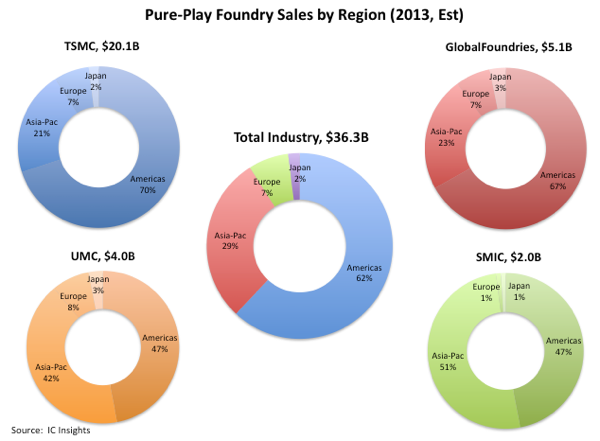 While the revenue of fabless design companies grow in US, China and Taiwan emerging as the next region in growth of revenue and number of fabless chip companies.

Below is the analysis shared by IC insights on this subject:

IC Insights believes that the Japanese market for pure-play foundry services also will increase in the future. The fabless IC company infrastructure in Japan is very small and not expected to increase much over the next five years. Most of the increase in foundry demand in Japan is expected to be due to a greater number of Japanese IDMs (e.g., Renesas, Toshiba, Sony, etc.) utilizing leading-edge IC foundry services.

The number of semiconductor manufacturers in Europe has slowly eroded over the years. Three large Europe companies—ST, NXP, and Infineon—have employed a fab-lite business model for some time. Other significant fabless semiconductor suppliers in Europe include CSR, Dialog, and Lantiq. IC Insights does not foresee Europe representing more than 5-7% of pure-play foundry sales in the near future.

All of the increase in pure-play foundry sales in 2013 is expected to be due to ≤28nm feature size device sales. IC Insights continues to believe that the more profitable (i.e., successful) major pure-play foundries, which include TSMC, GlobalFoundries, UMC, and SMIC, will be those that keep at the leading edge of the process technology roadmap.