After smart phone and tablets, is robot the next wave!

The applications of electronics started with telephony and analog radio broadcasting and now the most popular mass electronic device in the market is smart phone. What else can be the next big consumer-device/gadget electronics can power? Its mostly the robot, you can even call it a personnel e-assistant, may be iBot or iRobot. There is already a company named iRobot , which is making cleaning robots. People hate to clean the floors every morning, this activity going to be taken over by robots more and more in the coming years. Cleaning is just one example, there are plenty of activities at home and office where we human beings can effectively use robots. With the voice command enabled robots, robots can accomplish tasks by hearing to our commands. With the mobile phone becoming remote control, the future robots are going to be tied up with mobile phone applications to remotely monitor and control robots.

Just like the mobile phones, easy to handle robots available at affordable prices going to provide good (ROI) Return on Investment for the buyer. Irrespective of person's financial status, people going to buy robots, provided they really save time and money for its user by taking over some boring and risky tasks. 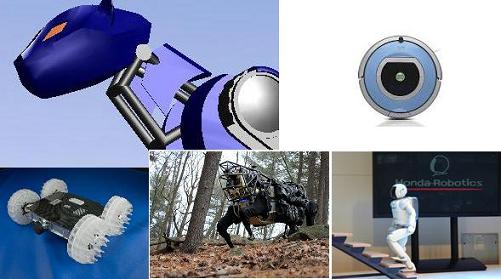 Roomba from iRobot vacuum-cleans your house. Security people use robots to disable explosive and also do surveillance. Robots are now preferred to do dirty or sometimes dangerous work. Man-made robots crawl on the other planets in solar system. Robots used to repair space station. Robots are used to monitor the wild animals and other forest resources. Robots are used to clean up the nuclear waste. Robots also assist physically challenged and sick people with their daily activities. Robots are already popular as toys for kids. Agriculture is another area where solar powered robots can take care of crop from seeding to harvesting. Researchers also notice people started treating robots like pets. Unlike robot in the Rajanikanth starred super hit movie 'Robot', where the robot turns emotional and attempt to marry a girl. But in reality people who use robots are getting emotional, if their robot gets hurt.

Here are some of the popular robots around the world:
Curiosity Rover on Mars
Robonaut on International space Station
Boston Dynamics' LS3 quadruped
Running robot called Cheetah which could run faster than a man
Pick and place robot called Baxter for industrial application
The humanoid robot Asimo from Honda
The jumping robot called Sand Flea by Boston dynamics
UAVs are also kind of flying robots
There are plenty of toy robots in the market

Let's look briefly at the technologies that make robots more effective:
When it comes to electronics, there's enough technology available now to make the robots work with humans more naturally. With the advance of signal processing technologies such as realtime video processing and audio processing, robots can analyse the image/picture they see using digital cameras and other sensors. They can listen to the voice commands more effectively. Speech to text or voice command is now a reality. Already automotive infotainment systems are integrated with voice-enabled interface. There are self driving cars designed using image processing and high-frequency radars. In fact, self driving car itself is a robot. With the success of self driving car, implementing similar technology in a robot is easier. We can also say, the research in robotics might have led to development of self driving cars.

With the multicore processors able to process massive data at real-time, the processing is not a big issue for robots. Robot can now understand the scene faster and better by using parallel processing and powerful image processing. Also with the availability of broadband wireless, cloud computing, and the Internet of things technology connecting robots to the world is lot easier, and controlling them remotely from any place in the world is very much possible.

The machine and the mechanics: Its full of motors and some kind of electromagnetic force dependent movements. The multiple number of machines Inside a robot can make it move in different directions and also make it to assume different shapes. But again nothing compared to many living animals. Various techniques are evolving in grasping/holding delicate objects and balancing.
Energy: Battery technology is improving fast, where robots can run/operate for a long time in a single charge.

Intelligence: This is where the researchers are trying best to built-in some level of intelligence inside robots. Very challenging task, only a little success in this area. Maybe some people argue that we should not develop robots with intelligency. This is a philosophical and social issue. We as a tech magazine will not delve into it.

Finally economics; the cost of robot is still high because the technology used in robots is not widely available. To start with robots may find the growth in selected applications. As the cost of the technology falls, at some point robot-use may grow suddenly and create market- wave similar to smart phones. Any such wave before year 2020 is a good guess.

One thing clear is, the research into robotics going to pay huge dividends. Whether you use it for designing exclusive robots or use them in other machines, good example is self driving cars.

Here below some market research data on robots:
Markets and Markets has posted the global service robotics market in 2011 was worth $18.39 billion. This market is valued at $20.73 billion in 2012 and expected to reach $46.18 billion by 2017 at an estimated CAGR of 17.4% from 2012 to 2017.
It is predicted in European Commission website, by 2020 the whole service robotics market could be worth over €100 billion.
Nuclear responder robot markets at $55 million in 2012 are anticipated to reach $1.1 billion dollars by 2019, as per Researchmoz.
ABI Research has reported the market for consumer robots was $1.6 billion in 2012, and will grow to $6.5 billion in 2017.
ABI Research also reported the global market for military robotics will grow from $5.8 billion in 2010 to more than $8 billion in 2016. Defense Robots include unmanned aerial vehicles (UAVs), unmanned ground vehicles (UGVs), and even unmanned underwater vehicles (UUVs) and Task Robots for Military Applications.
Electronics.ca forecast the household vacuum cleaner, pool, and gutter robot cleaner markets at $676.4 million in 2011 to reach $1.8 billion by 2018.