IHS has reported the global market for microinverters will expand by a factor of four from 2013 through 2017 as microinverters are adopted in greater numbers outside the United States while new markets also rush to take advantage of the devices’ improved efficiency and features compared to conventional inverters. 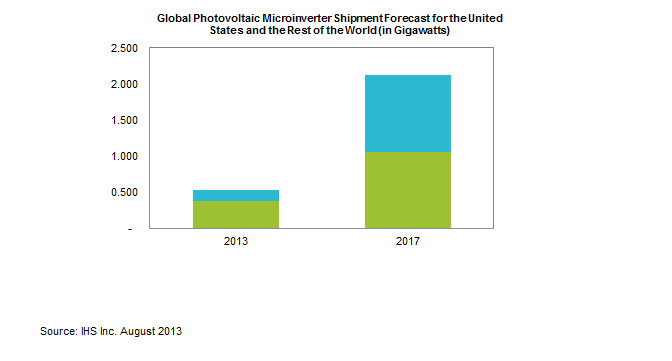 Below are the other market research points shared by IHS: Photovoltaic (PV) microinverter shipments worldwide are set to increase to 2.1 gigawatts (GW) in 2017, up from around 500 megawatts (MW) in 2013. Shipments during the period are forecast to rise fourfold, expanding at a 306-percent rate, as illustrated in the attached figure. Microinverters are devices that convert direct current (DC) electricity from a single solar module into alternating current (AC). Although they are more costly than conventional inverters, microinverters can increase the energy harvest of a system compared to conventional string or central inverter devices, which convert power from multiple solar panels. Until now, microinverter demand has largely been confined to the U.S. residential market. However, the emphasis is shifting to commercial solar systems and other regions. “Microinverters have reached very high adoption rates in the United States, particularly in the residential market, where penetration will reach more than 40 percent in 2013,” said Cormac Gilligan, PV market analyst at IHS. “However, in order to grow or maintain market share, microinverter suppliers now are striving to expand to new regions that at present don’t use the technology. Meanwhile, the advantages of microinverters—including their higher energy yields, enhanced safety and module-level monitoring capabilities—are making them more attractive in commercial systems, especially in small-scale projects.” Micro prices for microinverters While 2013 is forecast to be the first year that microinverter shipments grow to more than 500 MW, it also will be a challenging year for suppliers in terms of competition and pricing. A number of new market entrants are releasing products, including the two largest PV inverter manufacturers, SMA and Power-One. This intensifying competition will result in microinverter prices dropping by 16 percent in 2013. Despite this double-digit price decrease, strong shipment growth will drive microinverter market revenue to increase to more than $250 million in 2013. And although prices will continue to fall in the coming years, IHS predicts that revenue will reach $700 million in 2017. Strictly commercial Enphase Energy retained its position as the world’s dominant microinverter supplier in 2012 with a large share of the residential PV market in the United States. However, as the number of microinverter suppliers has grown, the company has faced increasing competition. As a result, Enphase and all other suppliers have been targeting new markets for expansion and have been promoting the use of microinverters in commercial systems. In an early sign of success for this strategy, Enphase recently announced a 2 MW commercial installation in Canada. Almost one-third of global microinverter shipments in 2017 will be going to commercial systems compared to 9 percent in 2012. The majority of these shipments in 2017 will be for systems sized between 10 and 100 kilowatts. Macroeconomics for microinverters The United States in 2012 accounted for 72 percent of global microinverter shipments. However, the U.S. share will fall to 50 percent by 2017 as a result of microinverters penetrating into new markets in Europe and Asia. Outside of the United States, microinverters are forecast to be most successful and achieve the highest penetration rates in the United Kingdom, France, Japan and Australia. Each of these markets presents excellent opportunities for microinverter suppliers if they can enter quickly and overcome the unique challenges of each country. “Japan has a very large residential market, but microinverter shipments have been very limited due to certification requirements and a strong preference for domestic suppliers,” Gilligan added. “PV markets such as Australia and the United Kingdom also offer great potential for microinverters because they are relatively new markets with installers that are not so entrenched in using string inverters, allowing microinverter suppliers to more easily educate them of the benefits of their solutions.” Thoroughly modern modules A new trend for suppliers is to offer complete solar modules that integrate microinverters, products known as “AC modules.” Some microinverter makers are partnering with module suppliers to produce these devices. SolarBridge Technologies and Enecsys Ltd. are some of the major suppliers now offering AC modules, and these companies have entered into a number of partnerships with module suppliers. “AC modules allow module suppliers to differentiate themselves from the competition while allowing microinverter makers to take advantage of the module suppliers’ sales channels,” Gilligan noted. “They also allow faster installation time as the microinverter is installed at the module factory rather than on-site, which can be a compelling reason for the adoption of microinverters.” IHS predicts that AC module shipments will more than quadruple in 2013 and continue growing to account for 32 percent of total global shipments in 2017.