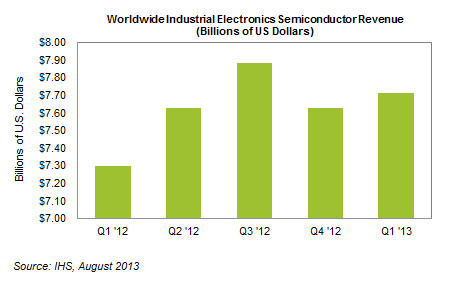 “The industrial semiconductor market’s performance was encouraging, especially in light of continuing global economic uncertainty and the seasonal nature of the market, which typically sees slower movement in the first quarter of every year,” said Robbie Galoso, principal analyst for electronics at IHS. “Some large segments of the industry, particularly avionics and oil and gas process-automation equipment, saw muscular double-digit gains, helping to drive up overall revenue.”

The other market findings disclosed by IHS includes:

Other companies reporting sound increases during the period were Xilinx of California for its test and measurement, military aerospace and medical product lines; and Microsemi, also from California, which likewise enjoyed expansion in medical electronics along with broad-based growth for the period.

However, the industry was not without its challenges, with the Eurozone crisis causing the most havoc.

“The financial troubles on the continent, particularly in Greece, Italy and Spain, had the effect of stifling growth as a whole, especially in the commercial market for building and home control,” Galoso said. “As a result, the individual sectors for lighting, security, climate control and medical imaging were deleteriously impacted in the first quarter, compared to positive performance for those areas in the fourth quarter of 2012.

In contrast to Europe’s woes was China, which displayed growth momentum and much-improved demand across a number of industrial end markets. Manufacturers like Siemens of Germany, Philips of the Netherlands, Swiss-based ABB and Schneider Electric of France said their first-quarter sales in China improved from the earlier quarter.

In the rare earth industrial sector, however, China’s hold on the market loosened as rare earth prices started going south this year. China had a more than 90 percent monopoly on rare earth elements in the past, but new sources in Australia, the United States, Brazil, Canada and South Africa have opened up the market, decreasing dependence on China.

The military and civil aerospace market had the most robust performance among all industrial semiconductor segments in the first quarter. Avionics was especially vigorous, driven by commercial aircraft sales from pan-European entity EADS Airbus and U.S. maker Boeing, up 9 percent and 14 percent, respectively, on the quarter.

In contrast to those high-performing segments, lackluster sales were reported in the markets for building and home control, for energy generation and distribution, and for test and measurement. One other market, manufacturing and process automation, reported stable growth, even though its sector for motor drives remained in negative territory.