In the year 2012, solar PV industry has undergone severe losses, many companies are in the State of closure. There was so much over supply, the market has pushed into severe losses. But by mid 2013, there are clear signals of industry recovery. Market researcher NPD Solarbuzz has reported huge demand in China and Japan.

NPD Solarbuzz forecasts solar photovoltaic (PV) demand from China and Japan during 2H’13 to reach 9 GW, representing an increase of 100% compared to 1H’13 and 70% compared to 2H’12. Overall, PV demand from the Asia Pacific (APAC) region will exceed 16 GW during 2013, up 90% Y/Y, and will account for over 40% of global PV demand this year, as per NPD Solarbuzz.

“The record level of PV shipments to China and Japan coincides with corporate margins returning to positive territory and the final shakeout phase of uncompetitive manufacturers nearing completion,” according to Finlay Colville, vice president at NPD Solarbuzz. “Having entered 2013 with a highly cautious outlook, tier-one suppliers are poised to exit the year with restored confidence, ahead of optimistic shipment and margin guidance for 2014.”

The other market study highlights by NPD Solarbuzz includes:

China is forecast to become the top country for PV deployment in 2013. During Q2’13, rooftop installation demand in China exceeded ground-mount installations for the first time, stimulated by government plans to develop the distributed generation segment. However, as bottlenecks related to project financing and grid accessibility for solar farms are resolved, 2H’13 will see strong ground-mount deployment from China Power Investment, China Guangdong Nuclear, Three Gorges Group, and other utility developers.

Japan continues to be the most active PV market this year, with growth of 150% in 2013 compared to the prior calendar year and a forecast of over 5 GW in the pipeline for installations before the end of Q2’14. PV demand in Japan during 2H’13 will be driven by the commercial and utility segments with 65% market share, in contrast to 2H’12 when the residential segment accounted for over 75% of demand.

Within the other key APAC markets, Australia and India, solar PV demand is being affected by policy disruptions. India is subject to delays in Phase II of the National Solar Mission, the ongoing anti-dumping case, and the prospect of reduced feed-in-tariff (FIT) payments. Within Australia, forthcoming elections and uncertainty over the future of the carbon tax and the Renewable Energy Target are also hindering growth. 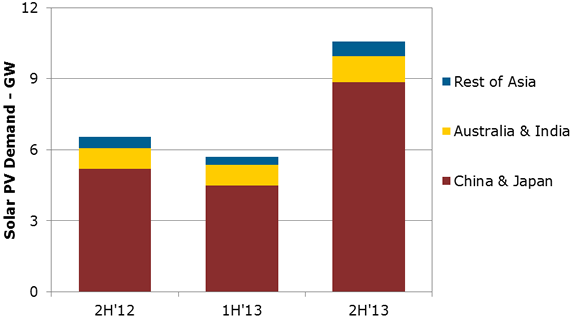 While China and Japan are currently fuelling project pipelines, demand from the APAC region remains highly dependent on Chinese and Japanese FITs. In Japan, the market is also showing signs of strain: module shortages have been reported, and developers are being forced into remote geographic areas.

“End-market growth in China and Japan has become essential to support domestic manufacturers and project developers, in addition to contributing to renewable targets,” added Colville. “However, we do not yet know how far the subsidies will be reduced during 2014 or how much capacity can be added before market caps on annual PV installations will become necessary.”