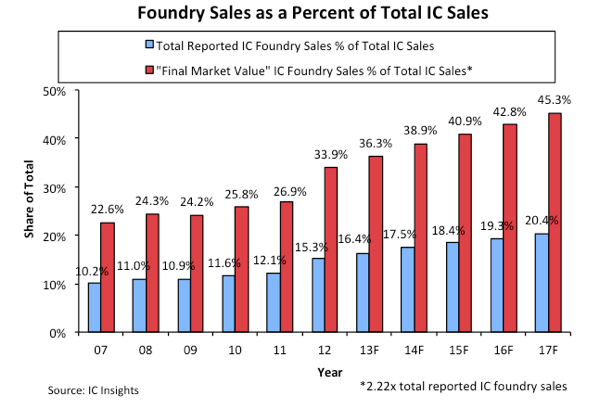 An example of how an IC foundry’s “final market value” sales level is determined can be made using Altera. Since a fabless company like Altera purchases PLDs from an IC foundry, and does not incorporate them into an electronic system, Altera is not considered the final end-user of these ICs. Eventually, Altera resells its IC foundry-fabricated PLDs to electronic system producers/final end-users such as Cisco or Nokia at a much higher price than it paid the IC foundry for the devices (i.e., gross margin). As a result, a 2.22x multiplier, which assumes a 55% industry-wide average gross margin for the IC foundry’s customer base, is applied to the IC foundry’s reported sales to arrive at the “final market value” sales figure.

As was shown in Figure 1, the total “final market value” sales figure for the IC foundries is expected to represent just over 36% of the worldwide $271 billion IC market forecast for 2013, and just over 45% of the $359 billion worldwide IC market forecast for 2017. The “final” IC foundry share in 2017 is forecast to be slightly more than double the 22.6% “final” marketshare the IC foundries held ten years earlier in 2007.

To further illustrate the increasingly important role that foundries play in the worldwide IC market, IC Insights applied the “final market value” sales multiplier to TSMC’s quarterly revenues and compared them to Intel’s quarterly IC sales from 1Q11 through 2Q13. Since TSMC’s sales are so heavily weighted toward leading-edge devices, IC Insights estimates that the gross margin for TSMC’s customer base averages 57% (a 57% gross margin equates to a 2.33x sales multiplier). Using the 2.33x multiplier, IC Insights believes that TSMC’s “final market value” IC sales surpassed Intel’s IC sales in 2Q13 (Figure 2), and that TSMC currently has more impact on total IC market revenue than any company in the world! Considering that Intel’s IC sales were 45% greater than TSMC’s “final market value” IC sales as recently as 1Q12, this was a dramatic change in a very short period of time.

In general, IC foundries have two main types of customers—fabless IC companies (e.g., Qualcomm, Nvidia, Xilinx, AMD, etc.) and IDMs (e.g., Freescale, ST, TI, Fujitsu, etc.). The success of the fabless IC segment of the market, as well as the movement to more outsourcing by existing IDMs, has fueled strong growth in IC foundry sales since 1998. Moreover, an increasing number of mid-size companies are ditching their fabs in favor of the fabless business model. A few examples include IDT, LSI Corp., Avago, and AMD, which have all become fabless IC suppliers over the past few years. IC Insights believes that the result of these trends will be continued strong growth for the total IC foundry market, which is forecast to increase by 14% this year as compared to only 6% growth expected for the total IC market. 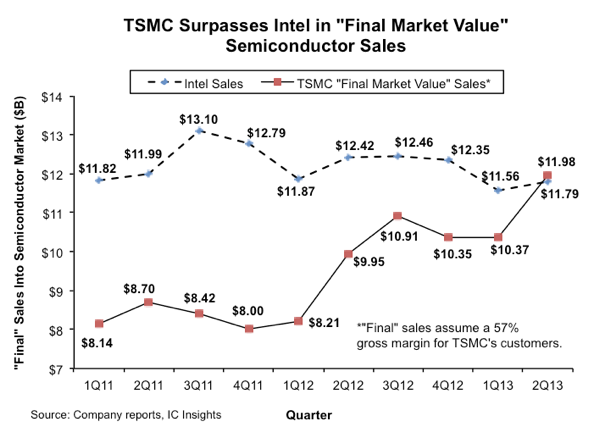