IHS has reported weeks of LCD TV panel inventory held by suppliers are set to increase to 5.0 in August, up from 4.9 in July and 4.8 in June. The last time the inventory reached this level was January 2012. Figure 1 below presents the IHS forecast on weeks of inventory for LCD-TV panels. 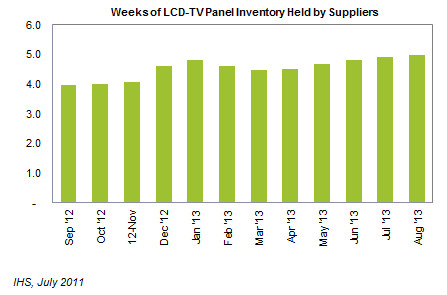 “LCD TV panel inventory is entering into above-normal territory in July and August,” said Ricky Park, senior manager for large-area displays at IHS. “Stockpiles are on the rise because of a delay in economic recovery for many areas of the world, along with growing uncertainty regarding domestic demand in China. The combination of a glut in panels and weak demand will cause price reductions to accelerate in the third quarter compared to the second.” Further market study points disclosed by IHS includes: Average LCD TV panel prices are forecast to decline in a range from 3 to 6 percent in the third quarter, compared to a 1 to 2 percent decrease in the second quarter. TV demand remains weaker than expected—not only in the developed markets such as North America and Europe but also in emerging markets. Sino subsidy suspension Panel inventories in China are on the rise due to a mix of industry and government factors. For one, Chinese TV brands overstocked panels in the first half. Moreover, the government in Beijing has terminated its subsidy program for energy-saving TVs, a development expected to dampen demand in the second half. In light of the weak demand and rising inventory, Chinese TV manufacturers are cutting panel orders. These domestic TV brands account for more than 80 percent of shipments in China, the world’s largest TV market. With the exception of February during the Lunar New Year holiday when they disposed of more panels than they actually purchased, China’s Top 6 television makers increased their LCD panel purchases significantly every month in 2013 compared to the same periods in 2012. However, they plan to purchase 24 percent fewer panels in July and 25 percent less in August than they did during the same months in 2012. Figure 2 below presents LCD TV purchasing for the leading Chinese brands. 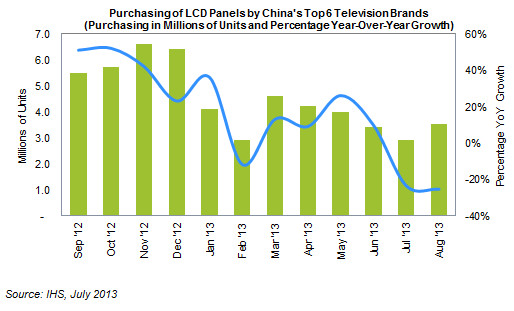