Yole Développement has reported in 2012, the IC industry saw a 2% decline, but Yole’s research reveals the MEMS sector managed another 10% growth to become an $11B business. “We expect a 12-13% CAGR through 2018 to create a $22.5B MEMS market, growing to 23.5 billion units”, announces Dr Eric Mounier, Senior Analyst, MEMS Devices & Technologies at Yole Développement. “We have identified a number of changes as old MEMS products mature and new ones emerge”, he adds. 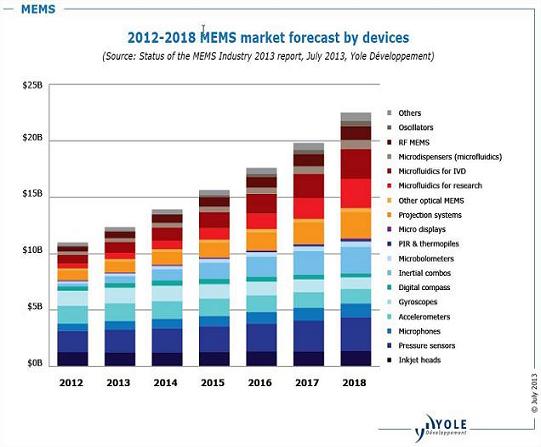 Other findings shared by Yole:

Yole Développement’s report shows markets for inkjet heads and DLPs have matured, but we see huge growth on the horizon for combination inertial sensors and for MEMS timing devices.

Combination inertial sensors are starting to see high volume adoption in both consumer and automotive markets, and will quickly account for a significant part of inertial sensor sales. Yole Développement’s report identifies new innovative MEMS devices that continue to emerge. The analysts expect to see a number of them start production, though not reach significant volumes for a few years. MEMS autofocus could come to market shortly. Big smartphone players are now looking at adding environmental sensors for heat and humidity, and MEMS devices could win those slots.
Growth of consumer applications is pushing new strategies for MEMS companies
Consumer is still the leading MEMS application with increasing needs for sensory interface. Yole Développement’s report ranks the top MEMS suppliers. In 2012, for the first time, the top two MEMS suppliers on Yole Développement annual Top 30 MEMS companies ranking are suppliers of inertial sensors, rather than of inkjet heads or micro-mirror actuators that have long dominated the sector. STMicroelectronics is the first company to grow a $1billion MEMS business, surpassing Texas Instruments. The second sensor supplier, Robert Bosch, has also pushed ahead of Texas Instruments and Hewlett Packard for the first time. The expanding demand for MEMS in both smartphones and automotive applications is creating a rising group of players that can expect to see solid sales in their future.

Yole Développement’s report shows how the results of MEMS players Top 30 and companies with the largest growth clarify just how much the smartphone market is driving MEMS demand. AAC Technologies had strong sales of MEMS microphones that propelled them to 90% growth and $65 million in MEMS revenues, putting them in the Top 30 for the first time. More microphones in more phones also helped propel sales to grow
more than 20% at both Infineon and Knowles.

Yole Développement’s analysis shows that very few MEMS players have more than one device in production. Only big manufacturers such as STMicroelectronics or Robert Bosch have different devices in production. Although there are many MEMS devices that have been in development for many years now (auto focus, micro fuel cells …), Yole Développement’s analysis shows that crossing the gap from development to industrialization is still challenging.

“Consumer and mobile applications are the fastest growing areas for MEMS, having a strong impact on many developments happening at the moment”, notes Laurent Robin, Activity Leader, Inertial MEMS Devices & Technologies at Yole Développement. The report shows that pressure sensors started to be produced in large volumes for cell phone applications in 2012 and MEMS microphones are still growing, boosted by the integration of multiple microphones in smartphones. It is interesting to note the market for standalone accelerometers is decreasing as mobile devices increasingly use combo sensors. There is high demand for compact devices, partially offset by the growth of 6-axis e-compass for low-end smartphones. Adoption of 6-axis IMUs is now strong and 9-axis combos should follow within a few years. This push from the consumer side drives MEMS players to adopt new strategies.
ASIC players will also benefit from the MEMS market boost

For the first time in Yole Développement’s Status of the MEMS Industry report, we also include a section dedicated to ASIC for MEMS and the MEMS manufacturing evolution.

With an estimated market value of $3.3B, the ASIC MEMS market is important, subject to technical challenges as the coming of combos shifts the ASIC needs from standalone MEMS sensor die to integrated systems where a sensor is an integral part of a complete sensor solution. The ASIC design is such a critical part of MEMS sensor with specific knowhow that big MEMS companies sometimes prefer to outsource this development.