Multiple benefits to India by focusing on electric two-wheeler

The basic transport nearly every urban house-hold in India use is a two-wheeler. On an average an Indian travels 300 KMs a month in his/her motor-bike(In cities people travel even more), which costs more than 400 Rupees per month. If they commute daily in electric bike, they can save at least a 50% (including the battery replacement cost) of what they spend on petrol-vehicle which amounts to a saving of Rs. 200 to 400 a month based on the distance they travel. This is the direct benefit. There are also lot of indirect benefits to the society.

Other indirect benefits/advantages of Electric bikes includes:
Saving of foreign exchange worth close to 1 Billion $ (approximate) by reducing the oil imports (There are approximately around 75 Million motor-bikes in India). Replacing all two wheelers in a year is impractical, this benefit is gradual over a period of 10 or more years.
Unlike electric-cars the electric-bike’s battery, which is of smaller capacity can be charged with solar charger. So there is a potential of electric power saving.
The electric bike when parked at home with fully charged battery could become an inverter/UPS when power failed at home.
The lesser pollution surely benefit the environment.
Domestic electric and electronic companies gets benefited from local design and manufacturing what is called as ESDM (Electronics System Design and Manufacturing).

Nobody need to force to use electric bikes, if the good quality bikes available at same price of gasoline bikes atleast cost-conscious people will buy the bijlee bike.

Here we list some of the electric bikes sold in India:

1. Hero Electric has good models of electric bikes. They have models called Maxi, Optima Plus, Wave DX, Zion, Cruz, and E-Sprint (pictured down below) costing in the range of Rs 38,000 - 44,000. Website: www.heroelectric.in

3. The Yo Bikes sells 5 nice models, some does not need licensing. The models include YO EXL, YO Xplor, YO Style, YO Electron ER and YO Spark. These are sold in the price range starting from Rs 22,000 Rs 32,000 (approximate). Webiste: www.yobykes.in

So it is hard to find any reason why Government should not support electric two-wheeler industry. Government can extend whatever the support it is giving to four-wheeler electric cars to bikes too, including charging station. Electric bikes and cars can use the same charging station. 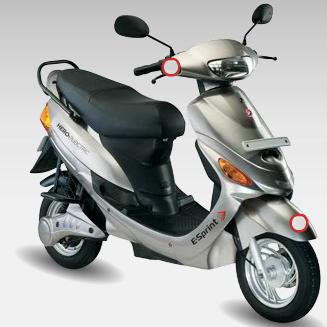 PS: This is the edited/corrected version of the same previous article

Automotive
AI-units market in automotives expected to reach US$1.1 b...