NPD Solarbuzz forecasts in the second half of 2013, global solar photovoltaic (PV) demand to reach 20 gigawatts (GW), up 22% Y/Y, mainly due to surge in demand in China and Japan. The full year 2013 PV demand is forecasted to reach 35.1 GW.

“The solar PV industry continues to transition from a European-dominated environment to a global market, with a wide range of countries contributing to growth in the overall PV market,” said Michael Barker, Senior Analyst at NPD Solarbuzz. “Until this transition phase is completed, however, the PV industry remains highly dependent on a small group of countries currently at the multi-GW level.”

The findings disclosed by Solarbuzz includes:
Global PV demand during 1H'13 reached 15 GW, up 9% compared to the same period in 2012. More than 60% of 1H'13 demand came from four countries: Germany, China, Japan, and the US. Global PV installations were led by large-scale utility and commercial ground-mount applications, which provided 45% of first-half PV demand. Residential rooftop applications accounted for approximately 20%, with the remainder coming from non-residential rooftop installations and off-grid applications.

“Just three years ago, solar PV installations in China and Japan were contributing less than 10% of the second-half global market-share,” added Barker. “In 2013, the number of large-scale PV projects completed in these two countries alone will determine the level of annual growth from the industry, and by how much global demand can exceed the 35 GW mark.” 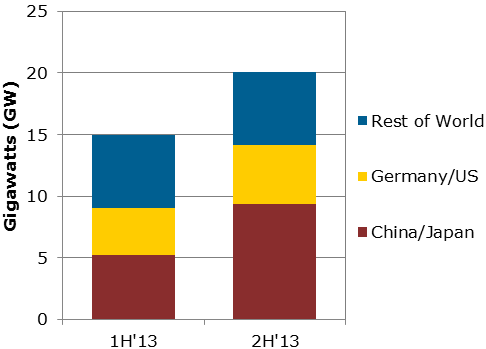